Why ‘Grease 2′ Was Always Better Than ‘Grease’

Forty years ago, Grease rama-lama-lama-ka-dinga-da-ding-dong’d its way onto the silver screen, going on to make history as the most successful movie musical of all time. And then, four years later, in the summer of ’82, came its much less summer-loved follow-up: Grease 2.

Suffice to say, greased lightnin’ did not strike twice. The controversial sequel was helmed by Grease producer Allan Carr and boasted nearly double the budget of its popular predecessor, but it was not the one that moviegoers wanted. Grease 2 was a box-office bomb, becoming one of the many black marks on Carr’s résumé, next to the Village People’s Golden Raspberry-winning Can’t Stop the Music and that cringeworthy, Carr-masterminded Rob Lowe/Snow White debacle at the 1989 Academy Awards.

Nowadays, when Grease 2 is occasionally remembered in a less-than-totally-contemptuous light, it’s for launching the career of mesmeric future Golden Globe winner and three-time Oscar nominee Michelle Pfeiffer — who at age 60 (!!!) is still a Hollywood A-lister and is now playing Janet van Dyne in this week’s much-anticipated Marvel blockbuster Ant-Man and the Wasp. Pfeiffer is rightfully considered to be one of the greatest actresses of her generation, thanks to her star turns in critically heralded films like Dangerous Liaisons, The Fabulous Baker Boys, and The Age of Innocence.

But to me, Pfeiffer will always be the dangerous, fabulous, not-that-innocent lead Pink Lady, Stephanie Zinone. 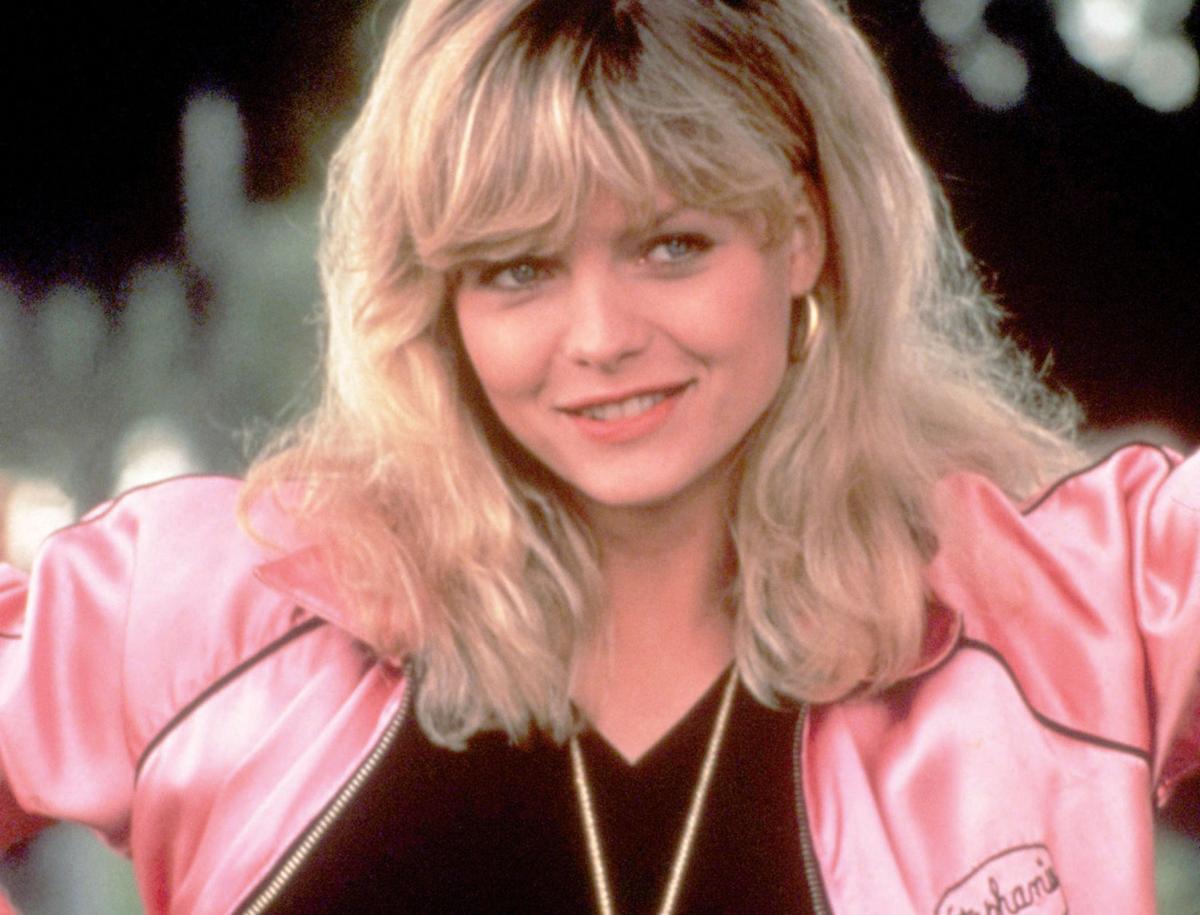 Why? Because GREASE 2 IS ACTUALLY SUPERIOR TO GREASE. There, I said it. Somebody had to, after all these years! So let’s turn back the hand of time (as the love duet from Grease 2 once sentimentally recommended) and reassess this unjustly maligned cult classic.

Pfeiffer’s character, as a second-wave feminist of the early 1960s, is the main reason why Grease 2 is more satisfying viewing for me. If I had a daughter, I’d much prefer she look up to the wise- and gum-cracking, ladder- and motorcycle-straddling Stephanie — a badass biker babe who holds down an afterschool job at her father’s hot rod garage, refuses to be some loser T-Bird’s arm candy (“There’s gotta be more to life than making out … I’m tired of being someone’s chick,” she muses at one point), and knows exactly what she wants (a cool rider, of course; don’t we all?) — than emulate the spineless Sandy of the first Grease. True, Stephanie doesn’t possess Sandy’s singing chops, but she does a whole lot more than “fill Olivia Newton-John’s shoes and tight pants very well,” as Variety once dismissively wrote.

The original film’s Sandy, despite being a “good girl,” is no role model. And Grease is no ’50s fairytale. Sandy’s “romance” with the uncouth Danny Zuko begins with him bragging (read: lying) to his friends that they went “all the way” during their summer fling. And then, when the two are unexpectedly reunited at Rydell High, Danny — more concerned with impressing those friends — treats Sandy terribly and leaves her in tears. He spends the rest of the movie acting embarrassed by his goody-goody girlfriend (at their awkward group malt shop date), ignoring her (callously pushing her aside at prom in order to win a dance contest with his more rhythmically talented ex — on national TV, yet!), or practically date-raping her (yet we’re supposed to be feel sympathy for Danny when Sandy flees in terror, leaving him blue-balled and “stranded at the drive-in”).

And we’re still supposed to cheer when the hopelessly devoted Sandy finally CHANGES EVERYTHING ABOUT HERSELF — even taking up a filthy smoking habit! — to win Danny’s affections. I’d always hoped that she’d wise up and instead go back to that hunky, Letterman-sweatered valedictorian she briefly dated to make Danny jealous, a boy who might be an actual suitable long-term partner. But hey, that’s just me.

Fun fact: Danny and Sandy were supposed to have cameos in Grease 2, as a married couple running a gas station together. Yep, that’s the future that awaited former straight-A student Sandy after graduation, if she ended up becoming Mrs. Zuko.

The feisty Stephanie Zinone was always destined for bigger and better things. 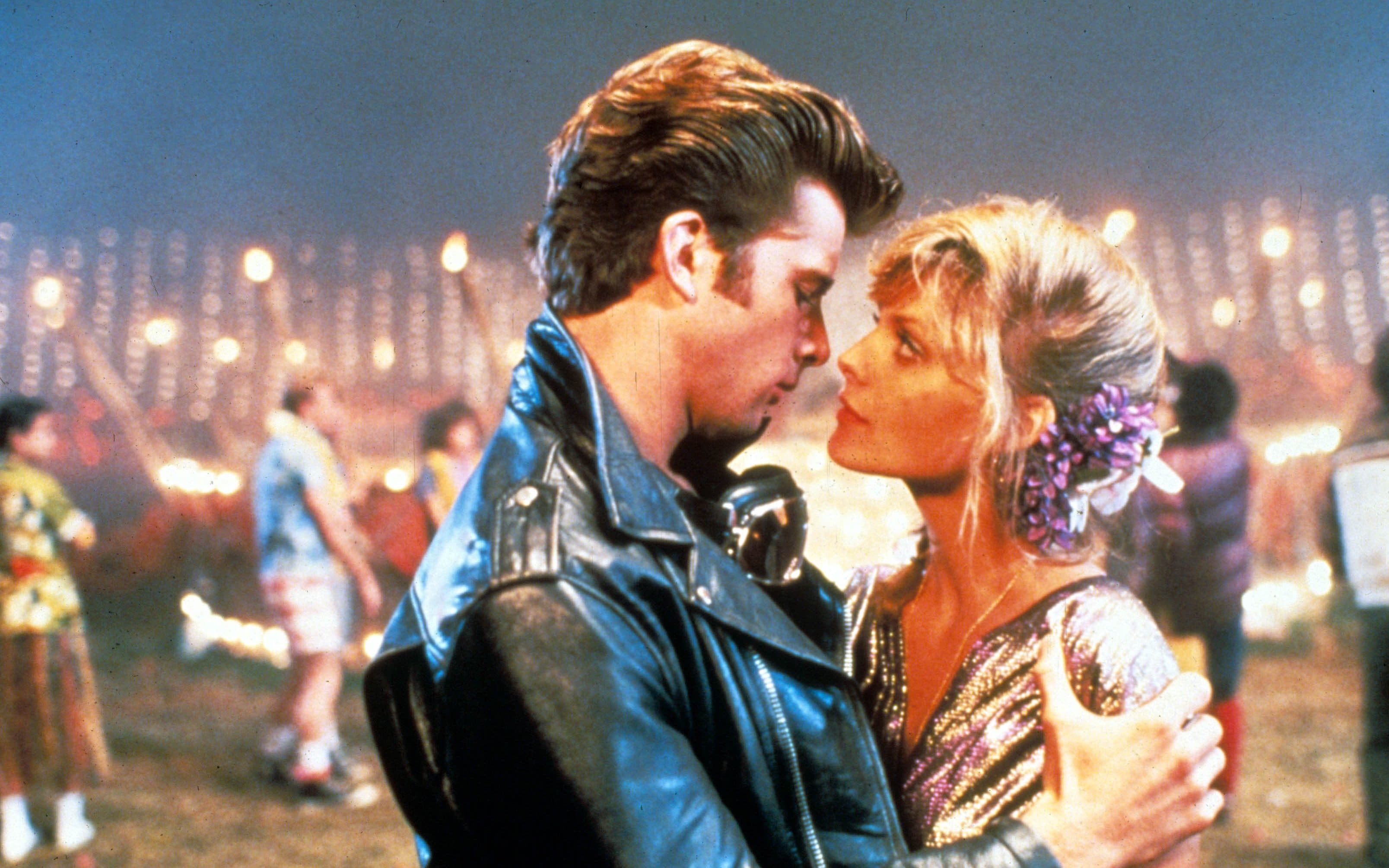 The Washington Post, one of the few publications that favorably reviewed Grease 2 at the time of its release, noticed this feminist shift between the two Greases (and noticed Pfeiffer’s standout performance), opining: “The change [in tone] proves especially flattering to the female characters. The girls in this blithe, satirical exaggeration of high school mores in the early ’60s enjoy parity with the boys and they express an emotional integrity that their counterparts in Grease could only envy. At the same time, they exert more erotic force. The romantic longings that seemed synthetic when expressed in song or expression by Olivia Newton-John acquire a smoldering, savory conviction in Michelle Pfeiffer, who seems to combine suggestions of an embryonic Deborah Harry with a bouncy, giddy sweetness.”

And speaking of sweetness, let’s talk about Stephanie’s Grease 2 love interest: English gentleman and scholar Michael Carrington. (Yes, Michael, played by Dynasty dreamboat and the future Rex Manning of Empire Records, Maxwell Caulfield, is supposed to be Australian Sandy’s cousin — but he’s British. The Commonwealth and all that, I guess.) Now, this is a man who’s true-blue(blood) boyfriend material! The sensitive and enlightened Michael accepts Stephanie just as she is, and when she tells him in no uncertain terms that she will give her heart only to “a dream on a mean machine with hell in his eyes,” he is the one who changes, saving up his tutoring wages for a motorcycle and metamorphosing into the “devil in skintight leather” mystery man of Stephanie’s revved-up sexual fantasies.

True, it’s a shame that Michael’s moto-makeover involves obscuring most of his perfect head and face with a helmet and fogged-up goggles. And let’s face it, the biggest suspension of disbelief required by this film — even more so than the characters breaking randomly into song every few minutes — is assuming that Michael would be an unpopular geek at Rydell just because he favors Mr. Rogers cardigans over leather jackets and tutors Stephanie in English. (Yes, he even helps Stephanie with her homework. What a guy!) I mean, the man has a swoon-inducing British accent and a high-cheekboned countenance that makes him look like the sixth member of Duran Duran. Are we really supposed to believe Michael would not be swarmed by coeds on the very first day of school? 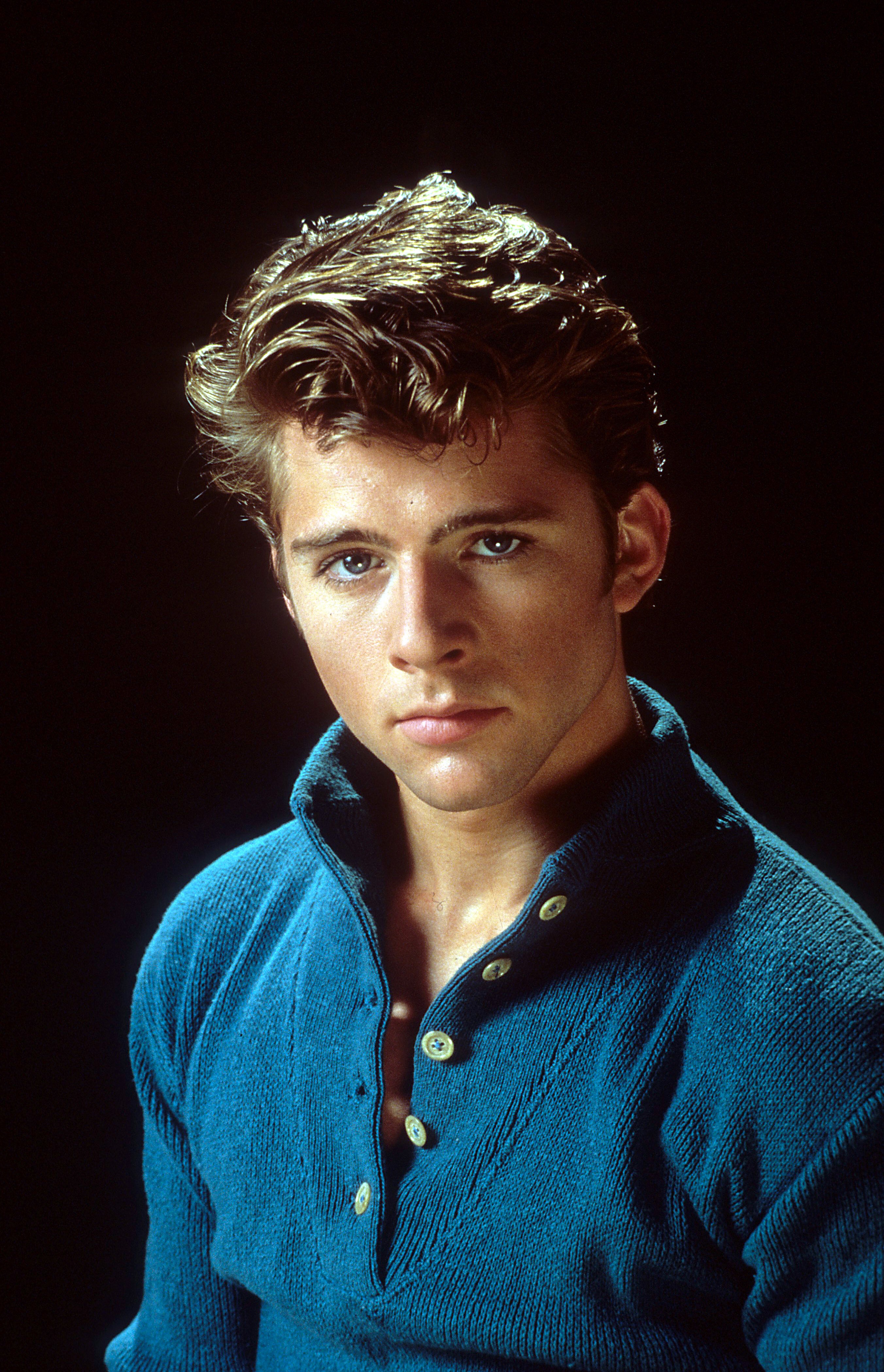 But anyway, my point is, Michael is a standup guy. He’s willing to compromise for love, he’s a brainiac with a bright future, and this second film’s healthier example of an opposite-attracts relationship is based on friendship and respect. As The Movie Boy accurately writes: “With charismatic breakthrough acting turns from Maxwell Caulfield and Michelle Pfeiffer that make it clear why Pfeiffer soon became an A-list Hollywood actress and not so obvious why Caulfield, despite still working steadily today, did not hit it bigger, the love story between Michael and Stephanie is as winning, if not more so, than the one between Danny and Sandy.” Damn straight. Sometimes nice guys don’t finish last.

And now, let’s compare the two Grease soundtracks. The first one shifted a whopping 28 million units worldwide, making it one of the best-selling albums of all time. Just this past weekend, the world-famous Hollywood Bowl hosted its annual “Grease Sing-A-Long” revue with Didi “Frenchy” Conn and Sha Na Na, and Fox’s Grease Live! production was a big TV hit in 2016. Meanwhile, the Grease 2 soundtrack stalled at No. 71 on the album chart and yielded no hits. (Lead single “Back to School Again,” despite being sung by actual legends and Rock and Roll Hall of Famers THE FOUR TOPS, barely cracked the Billboard Hot 100.)  These stats would have you believing that the music of the first Grease is superior. But you would be wrong. That is why I’m still waiting for the Bowl’s “Grease 2 Sing-A-Long” and for Fox to greenlight Grease 2 Live! (That has not happened yet, sadly, but a Grease 2-inspired musical, Cool Rider!, did run in London a few years ago. Give it all the Tonys!)

What makes the Grease 2 soundtrack so much damn fun is how totally oversexed it is. While Grease 1’s songs shyly, nudge-winkingly allude to sex (“Well, she was good — you know what I mean”), the hormonal overgrown teens of the sequel aren’t shy at all — thus foreshadowing the ‘60s sexual revolution right around the corner. (Grease 2 takes place in 1961.) There’s the Adrian Zmed vehicle “We’re Gonna Score Tonight,” for starters, with its elaborate and unsubtle bowling/sex metaphors, and “Let’s Do It for Our Country,” a horndog plea for Cold War coitus that seems even more timely in 2018.

And then there’s the film’s sexy centerpiece, “Reproduction,” which stars former ‘50s heartthrob Tab Hunter as a handsome biology teacher and is the best song about plant sex ever — it’s downright educational, even if we never really find out where the pollen goes. (“Make my stamen go berserk!” is a punny line at a RuPaul’s Drag Race level, which makes up for that.)

And is there anything sexier than Stephanie Zinone pining for a “Cool Rider” that can “burn her through and through” while dancing in painted-on black jeans? No. No, there is not. 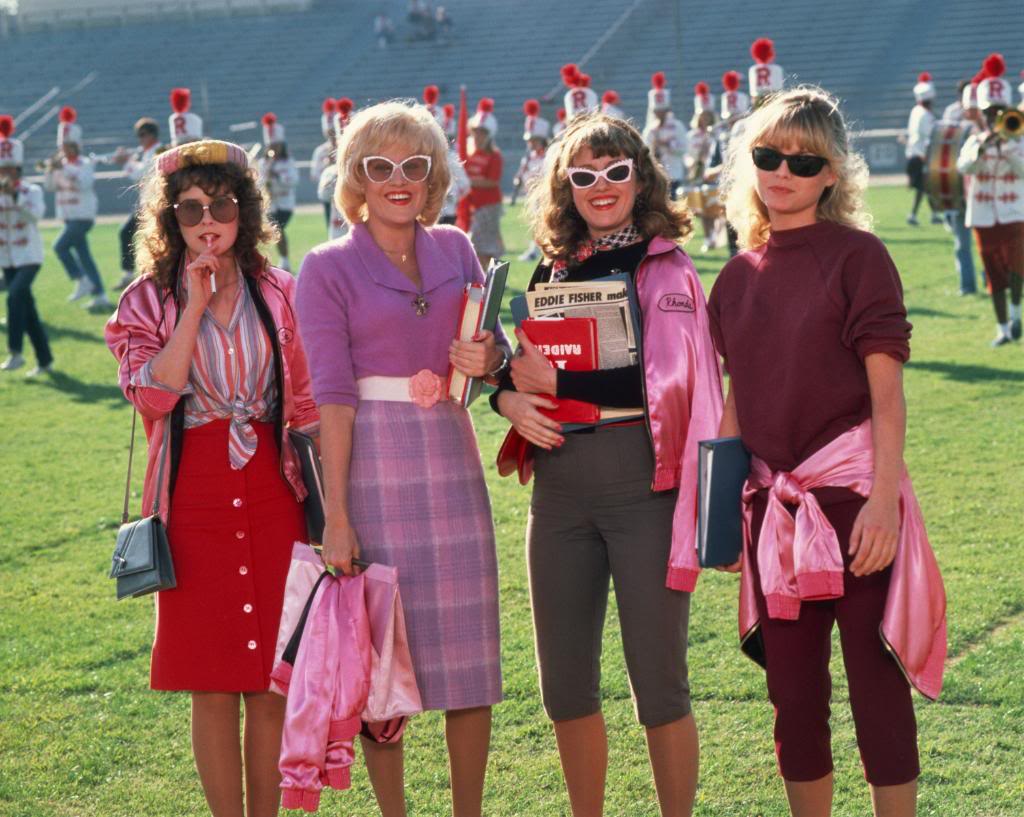 Sadly, Pfeiffer hasn’t expressed much pride in her first big starring role. (“I hated that film with a vengeance and could not believe how bad it was. At the time, was young and didn’t know better. … I hear it’s a cult movie now,” she once told Hollywood.com.) Caulfield has actually blamed Grease 2 for derailing his career. And Olivia Newton-John is also not a fan. However, Pfeiffer’s Ant-Man co-star, Paul Rudd, knows what’s up: In an amusing Grease 2 lyric-quoting interview with Entertainment Tonight about his experience with the woman formerly known as Stephanie Zinone, he said, “Don’t think I didn’t think about Grease 2 several times! We’re doing a scene, and I’m just playing, ‘Cool-cool-cool-cool rider’ over and over in my head.”

Go check out the underrated flick here, or go fall down a Grease 2 internet rabbit hole here, and you’ll have that song in your head, too, I guarantee. Because this movie was always C-O-O-L.