Pussy Riot’s Nadya Tolokonnikova: ‘Things Are Not That Different for Our 2 Countries’

“Things are not that different, surprisingly, for our countries,” muses Nadya Tolokonnikova, leader of notorious Russian feminist punk/art collective Pussy Riot. “It’s not the easiest time right now, and sometimes I find myself in political depression. It’s not always easy, but I know it’s not easy for our people in other countries as well. You [Americans] got your own s***.”

This comment, of course, leads to a conversation about the reportedly chummy relationship between President Trump and Russia’s president, Vladimir Putin, of which Tolokonnikova says: “I think it’s harmful for the world politics, this trend of authoritarian leaders and so-called strong hands, but I think in fact just a really insecure bunch of men who are trying to hide their insecurities with their machismo. So, I don’t really feel like it’s good it became a trend.” However, she adds on a more positive note, “But I see that people are really ready to resist. I was in the United States when Women’s March happened. … I loved the spirit of it, and I loved that people of even different views sometimes, or different political views, decided to join each other to protest against Trump. That’s something that we have to relearn, I guess, how to make our governments accountable for what they’re doing.”

Tolokonnikova is visiting Yahoo’s Los Angeles headquarters to promote Pussy Riot’s first-ever live U.S. concerts at L.A.’s Lodge Room and Bootleg Theater, followed by an onstage conversation with Chelsea Manning and Laurie Anderson at Houston’s Day for Night festival. These momentous events take place five years after Pussy Riot became an international cause célèbre, when Tolokonnikova and four other Pussy Riot members were charged with hooliganism and sentenced to jail for two years for staging a “sacrilegious” protest performance at Moscow’s Cathedral of Christ the Savior. Now, even after that horrific ordeal, Tolokonnikova’s spirit and sense of humor are very much intact, and she chucklingly admits that during her incident-free stateside concerts this month, she hasn’t felt the same rush of adrenaline that she gets when playing guerrilla events in her native land. “Because if you are an artist who has strong political beliefs in Russia, you cannot really expect that you will go to venue and you will play the whole show without being shut down!” 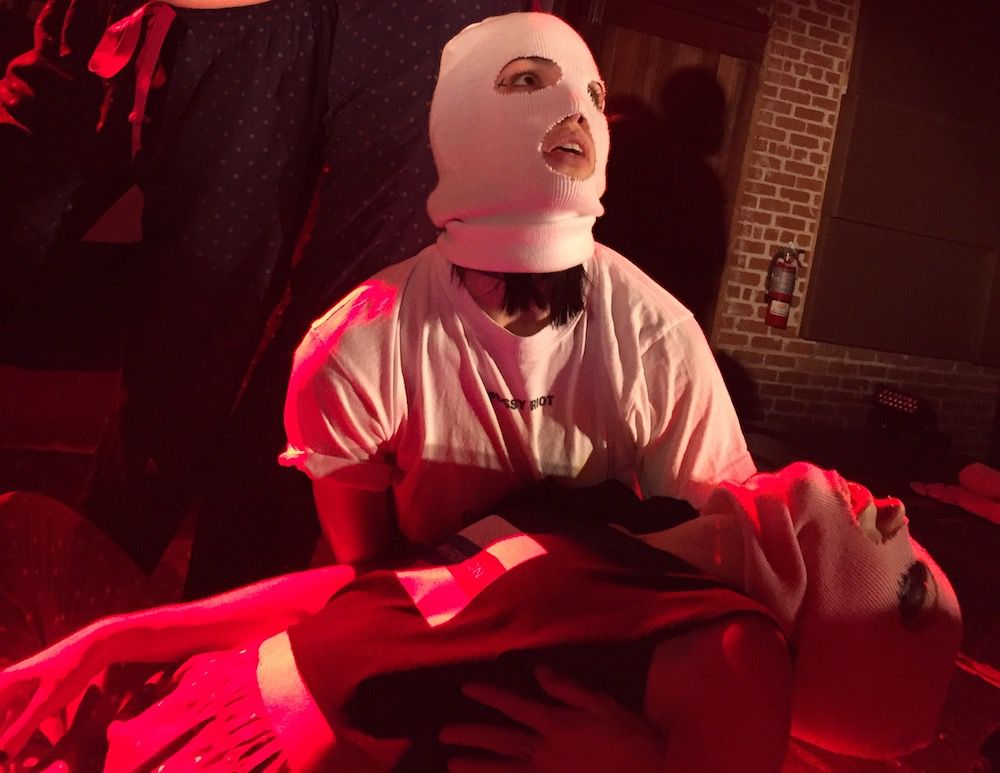 Surprisingly, Tolokonnikova still resides in Moscow. (“I feel like home is a big thing for me, and Russian culture and Russian language. Our art is tied with Russian politics. The reason why we started to do what we had started because we want to get rid of Putin, because we want to change our country, because we want to live our lives in a crazy, colorful, punk way and not being persecuted because of that. We still think it’s achievable. We still have hopes.”) However, she has spent a good deal of time recording music in America and therefore has a unique vantage point when it comes to U.S. politics and art. In May 2016, she even donned Trump drag for Pussy Riot’s prescient, Jonas Akerlund-directed “Make America Great Again” music video, a darkly humorous depiction of a Trump dictatorship; however, when the video came out before the presidential election, it suddenly seemed less amusing.

“I didn’t want to predict it [the election], I didn’t,” Tolokonnikova says of the controversial video, “but I felt like people are not treating elections here seriously enough. I’m not American, and I don’t live in America, so I may be wrong about it. But I just felt like Hillary Clinton supporters, people who are standing for progressive values, they weren’t concerned enough with this threat that were coming from far-right Republicans and from Donald Trump himself. I think a lot more things could be done and a lot more bridges could be built.”

It’s interesting, and unexpected, to hear a woman known for her extreme political views argue for bridge-building between the left and right. (“Punk is, for me, is to challenge status quo, including your own status quo, all the time, surprise every day and give people something that they don’t expect.”) But Tolokonnikova points out that “living in bubbles of our ideology” is “a disease of our time. It’s not just about Republicans. It’s about us, too. It’s about people of progressive ideology. We don’t want to talk with Trump supporters. I don’t necessarily want to talk to people who support Putin, but I have to, because otherwise we will never build this bridge, build this understanding. How can we act together? We need to somehow communicate and do things together.”

Tolokonnikova further explains that this mindset was even why Pussy Riot chose to stage their 2012 church performance. “If you take a look at the ’60s, you see Martin Luther King, you see Malcolm X. People did know how to use religion not to oppress themselves but makes themselves more free. And it seems like right now Christian rights, they grab the religion, and it’s really not easy for activists to use religion, which is basically a good thing. If you read the New Testament, that’s a really powerful thing,” she says. “That’s why we went to the church. We wanted to bring Christians on our side. We wanted to say, ‘No, no, no, real Christians, they shouldn’t vote for Putin, because he’s not an honest man. He’s killing people.’”

During her time in prison, Tolokonnikova learned about the importance of bridge-building and sharing information. Even though prison guards had forbidden other inmates to talk to her, in an attempt to isolate her and “turn my life into hell,” she managed to make friends, many of whom were initially pro-Putin. “Just in one month, you can totally change somebody’s worldview, not by preaching or by trying to change their mind actively, but just giving them a lot of literature, books, or magazines,” she recalls. “So after one month I spent in one correctional facility, I opened the room, and I saw my fellow prisoners in a circle. They were discussing Putin. They were discussing his recent reforms. They were discussing corruption in the government, in police stations. One month ago, they would all say to me, ‘No, no, no, we like Putin. We’re really up for his government!’  Without me saying anything, they were just reading magazines [and changing their minds]. … They were so brave, so you just learn how brave people are and how warm and how just incredible human spirits.”

Pussy Riot recently released the dystopian video for “Police State,” starring Chloe Sevigny, which was inspired by Tolokonnikova living more than half her life under Putin’s rule. (“The level of corruption is just incredible. They’re stealing everything. We are a really wealthy country with a lot of natural resources, but people are really poor because everything goes to not just the 1 percent, but a tiny, tiny, tiny, tiny particle of 1 percent. … We don’t want to take it anymore.”) But the collective’s next single and guerrilla-style music video, “Nasheed,” sounds like it might be a little more lighthearted. Tolokonnikova explains: “It means ‘Our World.’ Basically, it’s an homage to this infamous phrase, kind of something like your ‘MAGA.’ … We are suggesting in this song that we need to occupy the FSB building in the middle of Moscow and open a toy store.”

And, back to the subjects of MAGA and how Tolokonnikova has maintained an unbroken spirit despite everything she has endured, she keeps things in perspective by looking back at the rape scene that she had to film for the above-mentioned “Make America Great Again” music video. “I never had this [assault] experience in my [real] life, luckily, but even playing it, it was just disgusting. So, for the second half of the day after that, I was crying on the set. I have to be judged, but I have tears in my eyes. I can’t even imagine what people who went through rape, I don’t know how they keeping up their spirit. You were asking me how did I went through jail, but I think there are much worse things in life. And so, when I was in jail, I was thinking about I don’t want to be self-pity, because it’s not the worst situation. I’m still safe physically. I still have my mind. I can think, I can make art, and I can help other people. And through helping other people, I can help myself.”