April 5 marks the 25th anniversary of Nirvana frontman Kurt Cobain’s tragic suicide, so it is a somber time for Nirvana’s onetime manager, music industry veteran Danny Goldberg, who was known as the “Kurt Whisperer” from 1990 to 1994. During that brief whirlwind period, Cobain became the world’s biggest and most unlikely rock star as Nirvana made the leap from indie Sub Pop to major label Geffen, recorded and released Nevermind, followed up with the landmark album In Utero, and recorded their legendary MTV Unplugged session. During that time, Cobain’s personal life went through just as much upheaval, as he married and had a baby with Hole’s Courtney Love — and, along with Love. battled heroin addiction — before shooting himself at age 27.

Sitting with Yahoo Entertainment for a candid and lengthy chat about his time with Cobain, Goldberg — whose memoir, Serving the Servant: Remembering Kurt Cobain, just came out — sadly recalls the last time he saw Cobain in person, at an intervention staged about a week before the singer’s death.

“I was in New York, and Courtney called and asked if I would come and be part of an intervention. She was really worried about Kurt, said it was the worst she’d ever seen him and so forth,” Goldberg says. Janet Billig Rich, another manager at Gold Mountain Entertainment who worked closely with both Nirvana and Hole, “found some dude who had been part of interventions before, a 12-step person — the theory being that someone who had just been around that would a little gravitas to it. It’s so hard to know it’s going to work, and you just get advice from people, and it’s a lot of guesswork involved.”

When Goldberg, Billig, and “maybe half a dozen people” flew in from both New York and Los Angeles and descended upon Cobain and Love’s Seattle home, Cobain was upset about what he perceived as an ambush. “Kurt was really stoned, and we went to the house, and it was weird, and he was not happy, and feeling invaded by people lecturing him on how he should behave — and who would?”

As Goldberg reveals in his book, Cobain was especially upset that Billig flushed some of his drug stash down the toilet. But the people in Cobain’s home that day had the best intentions. “My message was just, ‘Whatever is bothering you, you can’t make a good decision the way you’re strung-out. Get clean, and then whatever you want to do, I’ll help you do whatever you want to do. But you can’t make any good decisions this way. It is no good future.’ Just the typical anti-drug, get-clean plea,” says Goldberg. 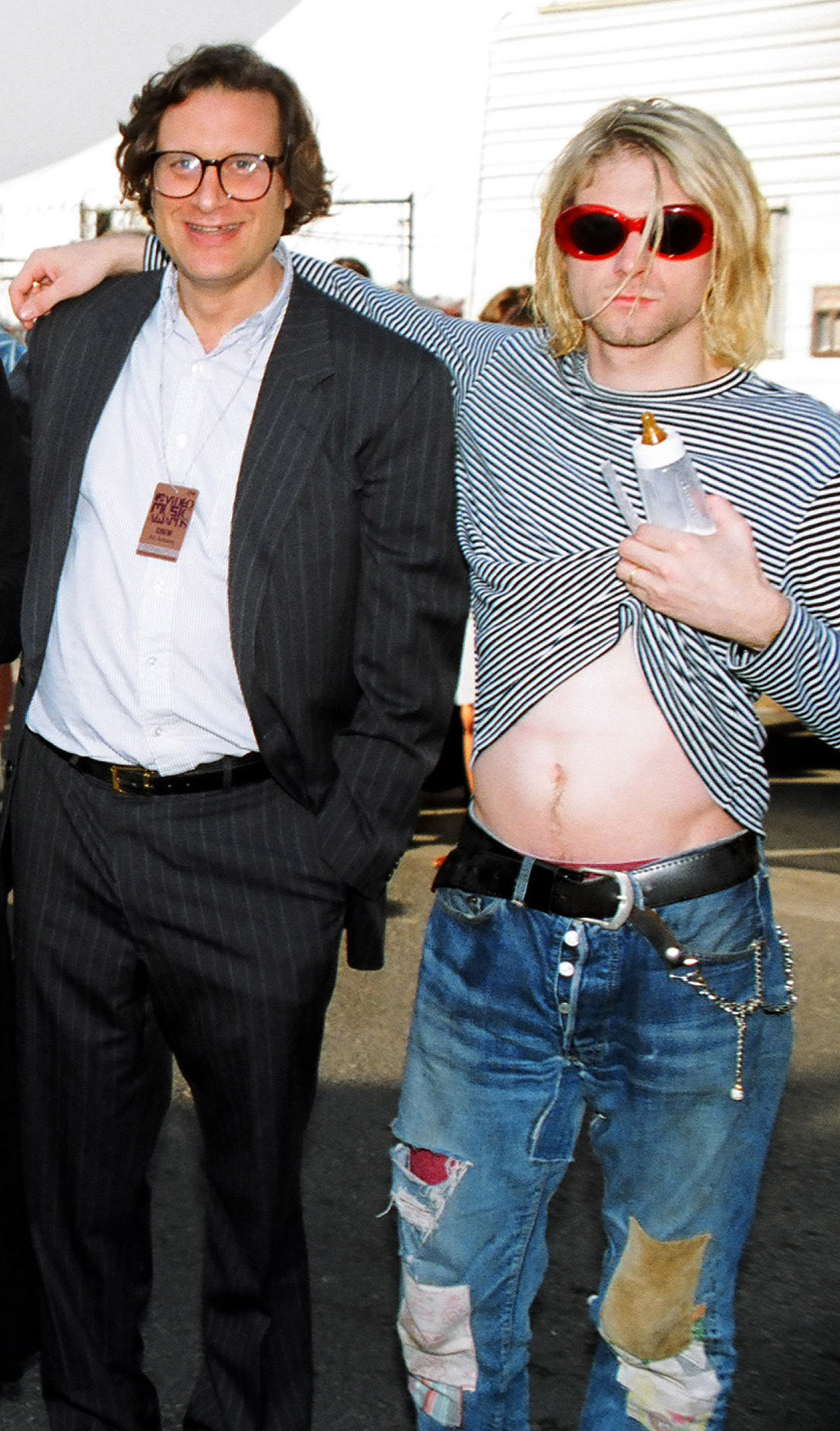 In Serving the Servant, Goldberg expresses some regret about how the situation was handled. “I was in a hurry to get home, and I let an impatience and brittleness get into my tone. That sounds like a subtle thing, but it’s the whole ball game when you’re communicating with somebody. It’s not always the words; it’s how you say them,” Goldberg explains. “I didn’t want to miss the plane to L.A.; I’d been away from my family in New York, and this was sort of an extra stop. Otherwise maybe, maybe if I’d stayed another hour, I would’ve thought of some intelligent thing to say, or got him to take a walk. You know, you just go over in your head: ‘Is there something I could’ve done?’”

Feeling bad about that had transpired during the ill-fated intervention, Goldberg phoned Cobain when he got home to try and make things right. “I just said, ‘Look, I’m so sorry if I came across as judgmental. You know I love you and I just want you to be happy, and I’m just trying to be helpful.’” Knowing that Cobain was immensely fond of Goldberg’s toddler daughter Katie (“Kurt loved her, and they used to play a lot; before Frances was born, it was almost like a practice kid for him”), he put Katie on the phone with Cobain, thinking her sweet precocious would cheer him up. “She told him that she was upset that Frances had pinched her the last time they were together, and could Kurt please talk to her about that? And he got back on — and he still sounded really just depressed and wiped-out. I just told him I loved him, and that was it.” It was the final time that Goldberg and Cobain spoke.

A quarter-century later, Cobain’s death still sparks a surprising amount of anger among both his fans and friends. Some people — including Everett True, a music journalist who covered Nirvana over the course of their career — were even angry over the eulogy Goldberg gave at Cobain’s private memorial, thinking it was too cheerful and positive. And while Goldberg insists that he was never mad at Cobain, he understands where that fury is coming from.

“I think when someone commits suicide, a lot of people take it as an act of great hostility to the survivors, especially the family members. That is a very common response, and there were certainly people that I spoke to, very, very close to Kurt — like [Nirvana bassist] Krist [Novoselic] and [Hole guitarist] Eric [Erlandson], for example — who just openly said, ‘How could he do that? What’s wrong with him? How could he do that to his daughter?’ And I respect those emotions. It doesn’t happen to be my emotions.

“I felt enormous grief, as I still do, but I just see it as a disease that no one can cure. If somebody died of cancer at 27, you wouldn’t be angry with them; you would just mourn them. And I think this was a mental illness that nobody knew how to cure. Nobody that any of us knew, and no one that he could find. It wasn’t like there weren’t efforts — the dozens of doctors, therapists, and so on, and maybe there was someone out there that could’ve helped him — but no one that we were ever able to find, or he was ever able to find.”

Suicide is an ongoing sad reality of the rock world, as evidenced at the recent deaths of the Prodigy’s Keith Flint, Linkin Park’s Chester Bennington, and Cobain’s ‘90s Seattle-scene peer, Chris Cornell of Soundgarden. Goldberg still doesn’t have any answers or closure. “I think it’s dangerous to try to pretend to understand things that really human beings don’t understand,” he says.

“Any time somebody kills themselves, I think people around them always wonder if there’s something they could’ve done. I don’t really believe there is, because certainly, I’ve read some, if you read what psychiatrists or philosophers, or priests, or rabbis, or yogis… people who’ve studied this stuff, nobody seems to have come up with any particular solution to it,” Goldberg muses. “I think there’s 50,000 Americans a year kill themselves. Three-quarters of them are male. Half of them are with guns. Hundreds of thousands of people a year. And then, people say, ‘Well, if somebody had a bad childhood, or if they were on drugs, or they’re prone to depression, they’re isolated,’ or one of the predictors… having relatives who killed themselves could be a predictor, and Kurt did have two uncles who killed themselves. But you could have 19 people with those same painful circumstances who don’t kill themselves, and one does, and why the one does and the other 19 don’t. … And what do you do about it with an adult who’s got all the legal rights of an adult, except beg them not to engage in self-destructive behavior, and to try to expose them to options for help?

“I’ll never get over it. Nobody who cared about him will. And no one who cared about less famous people who killed themselves will ever get over it. But it’s what happened, it’s part of the mystery of the human condition, and I love him anyway, I’m glad he was alive for those 27 years, I wish he hadn’t done it, but I’m glad I got to know him, and that the world got to know his music.”