James Durbin was the American Idol standout who begged America to “give metal a chance”; boldly belted Sammy Hagar’s Heavy Metal theme on Movie Night while Zakk Wylde played guitar; covered songs by Bon Jovi, Journey, and Muse; held his own headbanging alongside Judas Priest’s Rob Halford on the Season 10 finale; and collaborated with Motley Crue’s Mick Mars, Sweden’s Hardcore Superstar, and Sixx:A.M.’s DJ Ashba on his first post-Idol solo album. And now Durbin is joining forces with another veteran metal act, as it was officially announced Friday that he is the new lead singer for Quiet Riot.

Durbin teamed up last month with Quiet Riot guitarist Alex Grossi for a new collaboration called Maps to the Hollywood Scars, whose debut EP also featured playing by Guns N’ Roses keyboardist Dizzy Reed. “I have been a fan of James’s for a while, and after we got an impromptu chance to jam together in Las Vegas last fall, we kept in touch and the ideas just started flowing back and forth,” Grossi told Yahoo Music’s Reality Rocks at that time. And the next logical step in this partnership was for Durbin to join Grossi’s main band full-time.

Yahoo Music caught up with Durbin on the day of the Quiet Riot announcement to reminisce about his early Quiet Riot memories, his admiration for late original frontman Kevin DuBrow, his fondness for ‘80s metal, and gaining respect in the rock world after Idol.

YAHOO MUSIC: Is it true that Quiet Riot have been pursuing you for years? Why did it not happen earlier?

JAMES DURBIN: It was never the right timing, I suppose… I was in talks to join Quiet Riot last fall when Jizzy Pearl was leaving, but I had just signed on for a residency show in Las Vegas and unfortunately couldn’t make both gigs work at the same time. Fast-forward to last week, and I’m quickly learning the set and couldn’t be more excited to hit the stage… I believe everything happens for a reason, not just by chance. I’m very grateful for the opportunity.

So how did this all finally come together?

During my time in Vegas, I reconnected with an old acquaintance named Alex Grossi, the guitarist for Quiet Riot, and we started a songwriting project that quickly turned into an album titled Maps to the Hollywood Scars. We released our first five-song EP, Volume 1, just two weeks ago. I guess during that time, Alex had sent [drummer] Frankie Banali some of our demos, and that got the ball rolling internally. It all happened organically.

A couple interviews this week implied that the Quiet Riot singer after Jizzy Pearl but before you, Seann Nicols, hadn’t been getting along with the band — which was why they chose to replace Seann with you, even though he’d only been with Quiet Riot for a few months. Can you elaborate on what happened?

It’s not my place to say, as I’m only now joining Quiet Riot. But I know from experience that what happens offstage reflects the vibe onstage, and if the vibe isn’t right onstage then it’s not right at all.

I know you’re a big ’80s metal fan, but you’re a young guy, only 28 years old. How did you get into old-school metal?

I grew up around music and attached myself to music early on. It wasn’t until high school that I started singing in rock bands, writing my own music and discovering my vocal potential. My mentor Dale Ockerman turned me onto Led Zeppelin — and the rest is history. I remember waiting till my mom would leave the house and I’d blast the computer speakers listening to Iron Maiden, Quiet Riot, Judas Priest, Led Zeppelin, Dio, etc., trying to match vocals with their singers. I wouldn’t try to mimic them, but rather figure out how they did it. It’s something I still practice. 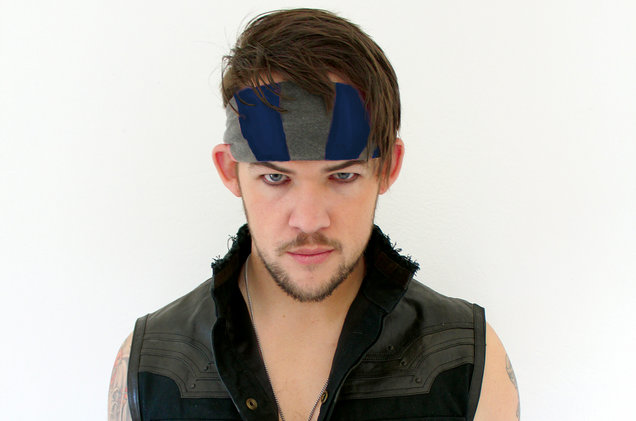 What is it about that era that you connect with?

I just love the fact that everyone let their freak-flag fly. When the guitars couldn’t get louder, the outfits did! Rock stars were larger than life, and that reflected in the music and the culture.

What are your early memories of listening to Quiet Riot?

The first time I really remember hearing Quiet Riot on a video game called Legends of Wrestling. The game’s theme song was “Bang Your Head (Metal Health).” I remember the game sucked! But I kept the disc to listen to the song — this was before YouTube. Then as I started developing my sound early on, I was compared vocally to Geoff Tate of Queensryche and Kevin DuBrow of Quiet Riot.

Do you recall your reaction when Kevin DuBrow died?

Honestly, I don’t remember. I was 18, doing what 18-year-olds do. But something I respect is that he never stopped rocking, no matter what the circumstances, from the bottom to the top and all the ups and downs along the way. He seemed truly content and happy on that stage, no matter how big or small, and he never phoned it in. That’s a drive and determination that I can look up to and honor when singing his music.

You’re the seventh lead singer for Quiet Riot. How will you live up to the band’s legacy but also bring something fresh to it?

I’m from a different generation, but have a lot of the same influences as Kevin, as I’ve been told — Steve Marriott of Humble Pie and Robert Plant of the almighty Led Zeppelin, to name a few. With my youth, I hope to bring a fresh new energy to Quiet Riot. I will perform these songs and entertain the fans in a way that pays tribute to Kevin DuBrow’s intensity and enthusiasm, only in my own way.

Most “rockers” who come out of American Idol have a lot of trouble being accepted in the rock world, but you’ve been embraced by the hard rock scene and the old guard. Why do you think you’ve been the exception?

The people that trash Idol and other [talent] shows only think one way. Some of the greatest songwriters, vocalists, and entertainers of our time have come from Idol. You can’t deny its power to find talent and potentially create superstars. I take my fair share of punishment and hate from the man-boys on the metal gossip sites, but they have nothing better to do, I guess. I’m blessed with loyal and supportive fans that have allowed me to maintain a career as an artist and working musician since my stint on Idol. My wife Heidi and I run this independently as our family business, behind the scenes — designing, fulfilling merch orders, etc. There’s a transparency there that is appreciated and respected by fans in this day and age.

Another former American Idol contestant, Adam Lambert, sings lead for Queen now, but he pursues a solo career simultaneously. Are you planning to keep recording as James Durbin, or will Quiet Riot be your only gig?

Quiet Riot is my main focus, but I’m still planning on releasing my own music, too. Alex and I will still release Maps to the Hollywood Scars’ Volume 2 in the spring via New Ocean Media. I’m currently working on an acoustic album to be released under our own Independent label, Wild Vine Records. I’ve also got a cover band called the Lost Boys that I play in with friends in my hometown, Santa Cruz. My plate is beginning to fill up, needless to say, but I will do my best keep this train a-rolling no matter how many cars are on the track. I’m just thankful and grateful to be able to keep on making music and entertaining my fans — past, present, and future. Now it’s time to bang your head and come on feel the noise.

What do you say when people claim “rock is dead”?

I can’t speak for anyone other than myself, and to me it’s alive and well!

Do you think this sort of music can make a mainstream comeback?

Music happens in cycles. So it’s definitely due for its imminent return.

What concerts do you have planned with Quiet Riot?

One will be opening for Cheap Trick, which will be a dream come true. And the Rainbow Bar & Grill’s 45th anniversary party [on April 23, in Hollywood] is a free event that Quiet Riot will be headlining. I just encourage people to come out in droves for an unforgettable night of rock ‘n’ roll, the way only the Sunset Strip can deliver.

So, will you wear striped pants onstage? Please say yes. I’ll wear mine to the Rainbow show!

The Day After Podcast with Jeffery Austin: Week of 5/18

The Day After Podcast with Jeffery Austin: Week of 5/11

The Day After Podcast with Jeffery Austin: Week of 5/4

The Day After Podcast with Jeffery Austin: Week of 4/27