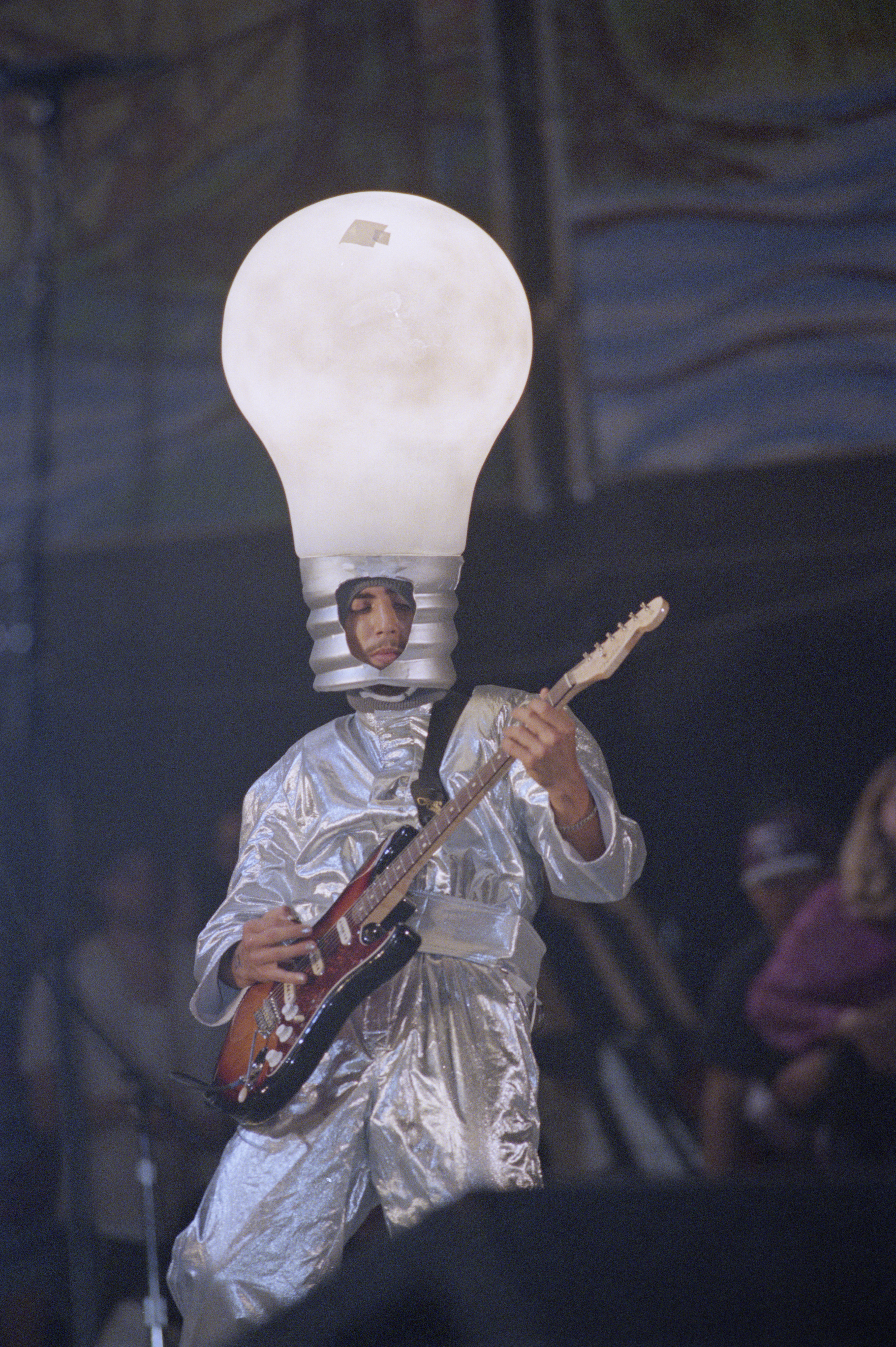 Twenty-four years ago, at the height of MTV’s alternative-nation domination, the organizers of Woodstock ’94 attempted to create a youthquaking event that would do for Generation X what the original Woodstock had done for the love children of the ’60s. And any of the ’90s kids who witnessed that event most likely remember two indelible images from the festival’s final day: Green Day’s muddy mosh pit, and the Red Hot Chili Peppers’ Residents-like light bulb heads.

Dave Navarro certainly remembers it. The Jane’s Addiction guitarist, who would go on to play on the Peppers’ 1995 album One Hot Minute, had recently replaced John Frusciante in the lineup, and this was this very first gig with the group. And he had to do it with a giant, vision-obscuring light bulb on his head.

“I think it’s no surprise that it was very uncomfortable in that,” Navarro says, laughing, calling in to Chili Peppers drummer Chad Smith’s SiriusXM radio show Volume West to discuss the notorious performance’s anniversary. “See, we were at a rehearsal, and [Chili Peppers frontman] Anthony [Kiedis] had this concept: ‘What if we had light bulbs on our heads?’ ‘Yeah, that’s cool. Like, we used to do the flame hats. This is much simpler. There’s no flames!’ And, it was totally Spinal Tap — like, he drew it on a napkin or on a piece of paper, and we handed it to these guys, and none of us saw the actual prop until we were 10 minutes away from going onstage, in front of a festival audience, cameras, satellite productions. And, we put these things on, and they each were about 60 pounds. And they didn’t stay on your head straight, you know? And then, in addition to that, I had to walk out and debut with these guys. I’d been in the band for about five minutes.”

“Dude, that wasn’t well thought out, was it?” Smith says, chuckling. “It was so Spinal Tap. We’re standing in the dark, and we’re each trying to get our [light bulbs] on, like, ‘How’s yours look?’ And, ‘Mine won’t light up!’ And, you know, we had these jumpsuits — we looked like baked potatoes with these big light bulbs. It wasn’t bad for me, because I sat there. I’m not moving around, you know? I’m just sitting. It wasn’t that bad. But, you guys…”

“If you watch the tape back, which I’ve seen many times since, it’s shots of all three of us looking back at Chad, like, ‘Oh my God, does this look OK? Is this working?’ And he’s just laughing,” Navarro recalls.

“I’m just laughing the whole time. It was a moment. It was a real moment,” says Smith.

“I look back on that moment as a highlight, just in the sense that, it was so outrageous and so funny. And they do look pretty cool in the pictures. I’m sure it was a neat thing. But like, in terms of just total ability to perform in those things, it was very difficult, and I think that there’s a reason why we only did one song in those,” says Navarro.

The Red Hot Chili Peppers also dressed up as Jimi Hendrix during their Woodstock ’94 set, as an homage to the first 1969 festival. And Navarro and Smith recall another amusing costume moment during Navarro’s mid-’90s tenure with the band that didn’t go quite as planned.

“There was one time when we did play on the David Letterman set, and David Letterman was world-renowned for having his set have arctic temperatures, freezing at all times — one, because he was more comfortable, and two, because it kept the audience awake,” says Navarro. “So, we thought to be funny, we would dress up in complete hooded, fur-lined jackets that were from Army surplus store, and glasses, like, mirrored cop glasses. And we would do our set like that, all four of us wearing them. … But, we didn’t realize at the time, that we looked exactly like the police sketch [of Ted Kaczynski], who was at large at the time! So, when people saw it at home and didn’t know that little reference…”

“They didn’t get the joke,” says Smith, laughing. “I think, Letterman, the only thing he did say was, ‘Oh, come on, it’s not that cold in here!’ Or something like that. That was the only saving grace. But still, if someone just turned the TV on and saw us, they’d be like, ‘Why is this band dressed up like the Unabomber?’”

Those ill-advised hoodies are presumably long gone, but the Peppers’ Woodstock ’94 famous light bulb getups are now displayed at the Hard Rock Hotel in Las Vegas. The band has no plans to wear them again (“At 51, there’s no way my spine could take that thing,” admits Navarro), but Navarro has fond memories of that crazy, muddy day at Winston Farm in Saugerties, N.Y.

“It was super-exciting. I mean, I owe a lot to those guys — to Chad and everybody else. That was one of the highlights of my musical career. You know, I was a massive Woodstock fanatic growing up,” Navarro gushes. “And then, to all of a sudden be on that stage with those guys was huge for me. I think that some of the best shows start out with a little bit of uncertainty and discomfort, which we certainly had both. … But, you know, it was fun, man. It was fun having that level of uncertainty. It gives you a little extra bit of adrenaline. I can use a little bit of extra boost of adrenaline.”

Audio of this conversation is available on demand via the SiriusXM app, on Volume channel 106.