Ah, the ’80s. It was a wacky and wonderful time for pop music, especially when it came to visuals. MTV’s programming schedule was packed with gender-bending, genre-crossing new-wavers starring in colorful videos shot in far-flung, exotic locales. But television in far-flung, exotic Europe was apparently even wilder — and sometimes a bit foul, or at least fowl. Take Germany, for example — a land where performances like the one above, by a young and naïve Depeche Mode, could actually happen.

Call it chicken a la Mode. In 1982, the then-burgeoning synthpoppers, whose 14th album Spirit just came out to critical acclaim, were somehow convinced by producers of the German variety show Bananas to mime along to “See You” in a prefab barn — while cuddling live poultry and awkwardly ignoring a random couple canoodling atop an onstage haystack. Nearly a quarter-century later, Mode mouthpiece Dave Gahan still remembers the infamous appearance with a chuckle and a shudder.

“Back in those days, we’d go where we were told to go and we’d end up on these TV shows. This was one in particular where some sort of farmyard scene was the set,” Gahan laughingly tells Yahoo Music. “And I remember we got to the point where we were like, ‘What are we doing? We show up to these things, we do what we’re told — you know, to get our music out there — but this is kind of the limit!’” 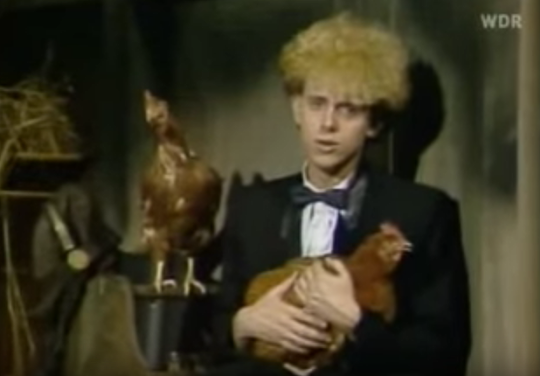 Gahan admits, “We were scared. It was horrific. That one definitely scarred me. Luckily, shortly after that, we did get to the point where we were like, ‘We’re not doing this anymore. It’s definitely not doing us any good.’”