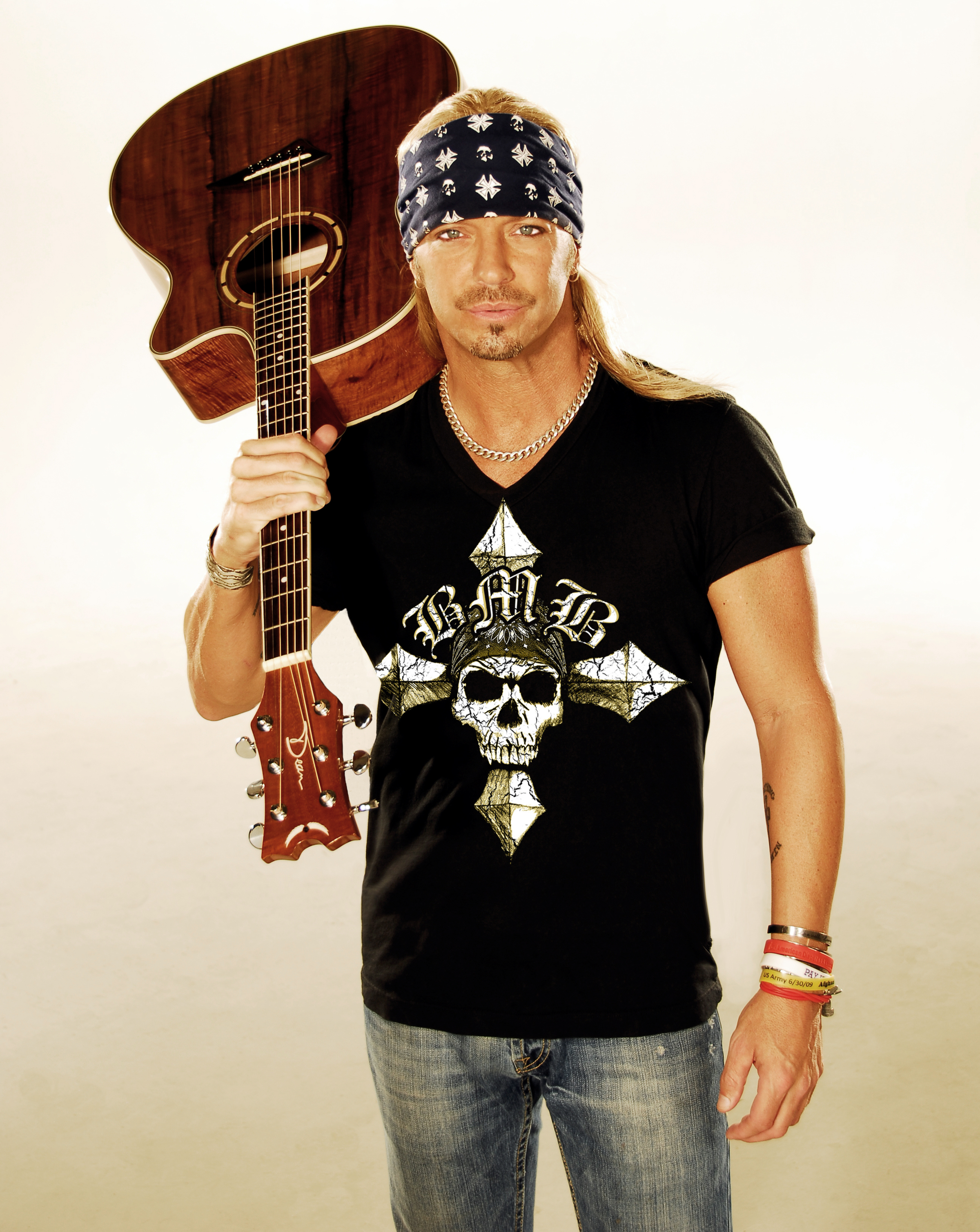 According to long-accepted rock ’n’ roll mythology, in the 1990s a band called Nirvana broke out with “Smells Like Teen Spirit,” MTV quickly replaced every Hollywood hair-metal act on its playlist with Seattle grunge acts, and the careers of bands like Mötley Crüe and Poison instantly evaporated like Aqua Net fumes. But Poison frontman Bret Michaels, whose post-’80s career has notably gone from strength to strength, scoffs at that concept, pointing out that Poison always peacefully coexisted with bands of different eras and genres.

“[Poison's early-’90s single] ‘Something to Believe In’ won the MTV Battle of the Bands going against Faith No More. We got the trophy. I keep it proudly in my house,” Michaels laughs. He also notes that the first Los Angeles radio play for Poison’s breakthrough hit “Talk Dirty to Me” came not from metal station KNAC but from alt-rock station KROQ, and that Poison, one of the first independent bands to cross the 3 million sales mark, once toured with the likes of Faith No More, Aerosmith, and even Alice in Chains. (Poison are currently on tour with Cheap Trick and Pop Evil, continuing to bridge audiences of various interests and ages.)

“I didn’t hate Nirvana. That was more of a media-constructed this-versus-that thing,” Michaels says. “Like, we didn’t know we [and grunge bands] were ‘supposed’ to dislike each other! That never actually happened. That was just a few disgruntled critics saying that.

“But me, as a musician, I never once thought about the critics,” Michaels stresses. “[Criticism] didn’t make me go, ‘Oh my God, if that person didn’t like my song, I better stop playing!’ That’s a mistake some artists make. Never let the pen embitter you; if you have, then you have failed. And if I could be quoted on one thing, it’s that I never fell for the hype, and I never fell for the criticism.”

Poison, the peroxided princes of the spandex-swaddled Sunset Strip, were obviously never critics’ darlings; despite writing some incredibly earwormy party anthems and Olympian power ballads, they were often unfairly dismissed as pretty-boyz-making-noise who embodied everything tacky and excessive about the ’80s L.A. metal scene. But Poison’s music has endured, and they’ve picked up some unexpected admirers along the way.

“I think the fan you’d be most surprised about was a good friend of mine, God rest his soul, Dave [Williams] from [nu-metal band] Drowning Pool,” Michaels reveals. “They were physically told by their label, ‘Be careful [what influences] you mention,’ and Dave told them, ‘F*** you! I did not grow up on early Black Sabbath. I grew up on Poison! I grew up on Mötley Crüe! I grew up on Guns N’ Roses!’” 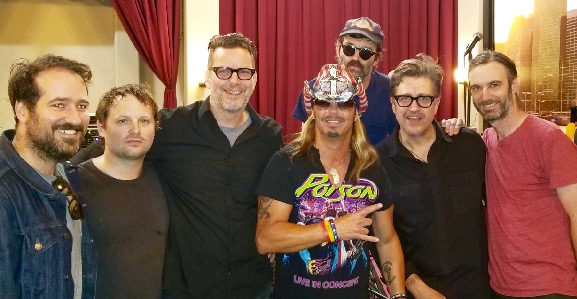 Another passionate Poison fan is Miley Cyrus (“one of the most talented voices ever,” Michaels gushes), whose first-ever concert was Poison in Nashville; she memorably covered Poison’s biggest smash, “Every Rose Has Its Thorn,” in 2010, and she also sang on Michaels’s solo song “Nothing to Lose.” And she’s just one of many celebrities with whom Michael has jammed. “Here I am one day, up onstage with Jimmy Buffett or with Dave Matthews,” he chuckles. “Then the next day I jump onstage with the Eels and play my harmonica.” (Yes, that actually happened. Photo evidence above!)

While the passing decades have generated new appreciation for Poison, admittedly some of the lyrics and imagery from their original decade — such as Poison’s unsettling lines from “I Want Action” like “Check out the schoolgirls” and “If I can’t have her, I’ll take her and make her,” their peers Mötley’s tendency to put in cages and objectify women in “Girls, Girls, Girls,” and particularly misogynist GNR lyrics like the ones in “It’s So Easy” and “Used to Love Her” — have not aged so well in the #MeToo era. Michaels does acknowledge this, thoughtfully.

“I’m being very honest. I’ve never had where someone came up and was offended. With ‘I Want Action,’ I think people take it in the context of the Sunset Strip and the party scene; it was tongue-in-cheek,” Michaels says. “And I’m not speaking for any other band [of the ’80s], but I can’t go back and change it. I can’t go back there and say I’d ‘fix’ it. If I wrote that stuff now, would things be maybe slightly different in that kind of party song? I don’t know, maybe. But you gotta go with the real phases of your life. You can’t be 23 and write [the same] song when you’re 43 or 53. You write it in the phase you’re living in. Would I write those lyrics now, in this age? I don’t think so. … But I want to say this, very carefully: If we’re going to compare apples to apples and you’re going up against some of this current hardcore rap that is extremely popular right now, has it really changed? Is it any different? I mean, the language used now is pretty straight-up hardcore.”

Michaels continues, “It was a great era of fun on the Strip [in the metal ’80s]. We were livin’ it. We were havin’ the time of our lives. Everything was a party.” He then adds more seriously, “But Poison, not once, not ever, forced anyone to do anything they didn’t want to do. I want be on record about that. Backstage parties were a party. No one was at gunpoint who came back there. … And let me make very clear: No means no. I want be on the record with that. We’ve never done that stuff, meaning with our band at parties; there’s no spiked drinks, none of that. I’ve got to be pretty strong about this, as a father of two daughters: No matter what goes on in an evening, how much teasing, when the answer is no, the answer means no. That’s it. There’s no more to it. And I’m saying [women] absolutely should stand up if something is done to them.”

Interestingly, Michaels says it’s those seemingly lightweight Poison party tunes that were the most challenging for him to pen during his crazy, carefree youth. “For me, music is therapeutic, so the songs that came to me the easiest came from the most devastating moments of my life,” he explains. (He wrote “Every Rose Has Its Thorn” on the road, in the middle of a laundromat, while going through a breakup with his girlfriend back home; “Something to Believe In” was inspired by the death of his best friend.) “The toughest songs to write were actually the party songs, like ‘Nothin’ But a Good Time,’ ‘Unskinny Bop,’ and ‘Talk Dirty to Me,’ because when you’re in the middle of a party, having a great time, you don’t really feel like sitting down and writing music. You’re just living in the moment.”

And now Michaels, the man credited 32 years ago with “vocalizin’ and socializin’” in the neon-font credits for Poison’s colorful and sometimes cartoonish debut album, Look What the Cat Dragged In, is still living in the moment, having endured much worse than a bit of post-grunge criticism (“being a diabetic, surviving a brain hemorrhage, an emergency appendectomy, heart surgery, all of it, and going right back out on the road”). And he’s still bringing nothin’ but a good time to the unskinny-boppin’ masses. “The music withstands the test of time. You’re never gonna make everyone love what you do,” he shrugs. “You just embrace the fans that do.”