Andrew W.K. Shares the Gory Story of His ‘I Get Wet’ Album Cover

It’s perhaps the best use of pig’s blood in pop culture aside from the prom scene in Carrie.

Sixteen years ago, international party ambassador Andrew W.K. appeared on the scene, a vision of pure white light/white heat as he lumbered about in his “Party Hard” music video looking like a rock ‘n’ roll version of the Incredible Hulk with all the green body paint bleached away — his steroidal muscles straining the seams of his trademark soiled white jeans, his lank mane of sweat-slicked hair and brawny Popeye arms whirling in all directions, his contorted face a road-map of bulging, throbbing veins through which pumped 100 percent, red-blooded rock ‘n’ roll.

But, speaking of red blood… it was Andrew Wilkes-Krier’s I Get Wet album art that caused the biggest sensation. And it’s still considered one of the most iconic, and controversial, rock photos of the past 20 years. (In the U.K. — where Andrew first took off thanks to an NME double-cover and the British music press declaring him the “savior of music” and “bigger than Jesus” — the Advertising Standards Authority called the image “distressing” and “suggestive of drug use and violence,” with the potential to “frighten children and vulnerable people.” Mercury Records refused to alter the artwork.) 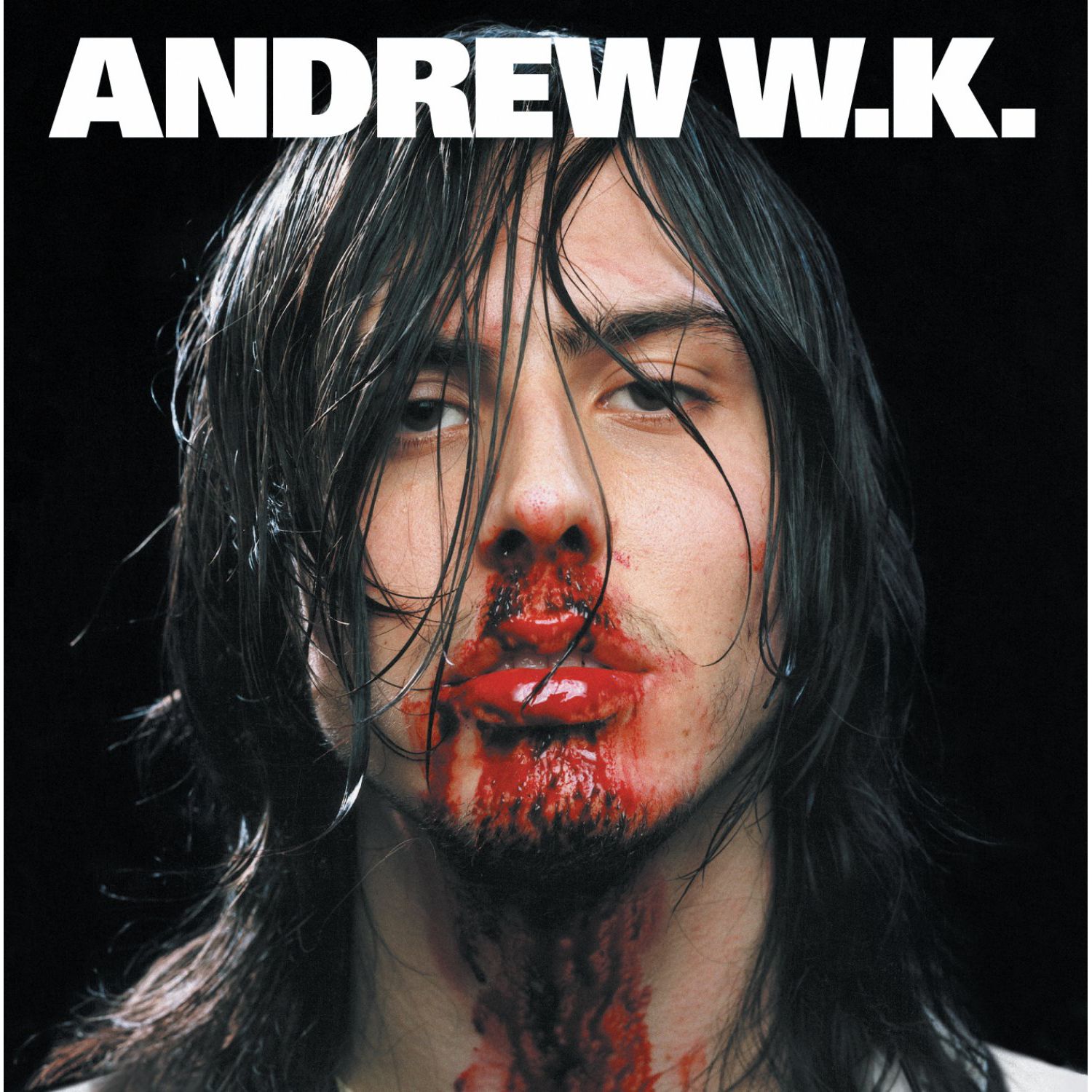 Many urban legends have surrounded the I Get Wet album art over the years. Did Andrew smash himself in the face with a brick? Was that real blood? Did his gushing nose glamorize or encourage cocaine use? Sitting with Yahoo Music for a Facebook Live chat to promote his upcoming “The Party Never Dies” tour, Andrew recalls the shoot with renowned art photographer Roe Ethridge (“I had never done a photo shoot of that caliber with anybody, and I was amazed that this guy was willing to work with me”) and sets the record straight.

“It was one of those moments where there is not a lot of preconception,” Andrew muses. “It was one of those things where I didn’t even anticipate that was going to be the shot, and then it was all meant to be. Sometimes destiny intervenes, for better and for worse. In this case, I think, hopefully for better. That’s now my logo. That’s my ‘golden arches.’ … The hardcore partiers, they know the bloody nose means ‘party time.’”

So what was the inspiration for the startling image?

“I had gotten [bloody noses] quite a bit, maybe like other people had, from over exuberant nose-picking — I’m not proud to say that — or from dry weather, or being hit in the face of basketballs, and things like that. It was not an uncommon occurrence in my younger years to get a bloody nose — which is actually one of the things I liked about this look, was I thought everyone from your grandmother to a little kid, has probably had a bloody nose. It doesn’t always have to be the result of some violent thing. It’s like a lobotomy kind of feeling. There’s something about the skull, and your nose, and the brain. It just seemed like this was meant to be my look.”

And was that really  the “Girls’ Own Juice” singer’s own blood?

“It was a combination of a little bit of my own blood,” Andrew reveals. “It was actually a lot harder to get a bloody nose on cue. … I tried first to get it by hitting myself, but it’s hard to hit yourself! You end up pulling back, though it still hurt. And I blew my nose as hard as I could. All the things that you’re not supposed to do — if you get a bloody nose, you’re supposed to tilt your head back, and don’t blow your nose, so I was tilting my head forward, and kind of head-banging, and blowing my nose, and jamming my fingers up there, trying to find a vein. And it did bleed. I got a bloody nose. But it wasn’t this gush that I had visualized.

“That’s where [I got] some other blood, of I guess a pig. I got some sort of, like, butcher’s juice that they would have on hand. There was a butcher shop nearby my apartment, where I lived, called Busy Bee, and they just had it; I guess it was the runoff. It didn’t really taste like much, but it did work. It congealed a little bit, and mixed with my blood of the synonymous animal that sacrificed itself.”

And now in our digital age, a decade and a half later, there’s actually an Andrew W.K. app that lets fans superimpose bloody noses on their photos — definitely a more hygienic and less scary way to get Andrew’s signature look. “And less painful,” notes Andrew.

I released my first ever smartphone app about partying…https://t.co/DZhZjr2UQr pic.twitter.com/xPM2FTiCCs

The I Get Wet photo shoot isn’t the only example of Andrew sustaining an injury in the name of rock ‘n’ roll. “It’s hard for me to hold back when that music kicks in,” he says of his ferocious live shows. “I have injured myself, usually by somehow hitting myself. I have broken my nose by kicking my own face by accident — and people thought it was part of the show, which I guess works in a way!”

Andrew throws his entire body into his stage act when he sings his amped-up anthems (imagine beer commercial jingles as performed by Twisted Sister after shotgunning a case of Red Bulls), so it is inevitable that someone — onstage or in the audience — will get hurt. But Andrew says it’s all in good fun.

“Certainly people have sustained injuries, but there’s this incredible, protective beacon of positivity in these crowds, that I think permeates the whole venue. It’s violent, but it’s cheerful violence. So people are running amok with smiles. I’ve seen people do incredible things. Someone dropped their keys once in the middle of a moshpit, and everyone stopped and found the person’s keys. It’s a real warmhearted, good-natured kind of aggression, which is the best kind. It’s just flailing, not to hurt anybody, but just for the joy of flailing. … I’ve actually gone onstage with a twisted ankle, and it was healed by the end [of the concert]. That is the healing power of positive partying.”

As for what partying means to Andrew, the positive-minded “Party Never Dies” performer — who displays all the steely conviction of a professional motivational speaker or charismatic cult leader, and has had side gigs writing serious advice columns for Vice and the Village Voice, advocating for mental health awareness, and lecturing about partying and My Little Pony — says:

“It’s celebrating existence. I think celebration is an active display of gratitude. Of course, we’re often taught that partying begins Friday night, and then by Sunday you’re supposed to wrap it up to get back to ‘real life.’ But I figure, if the ideal headspace is one that acknowledges every waking moment as a gift, then you would be celebrating every second that you get to exist — even the brutal seconds, even the painful seconds, even the moments that are not what you think of as a reward, but more as a trial or tribulation, those count too. … It might even be impossible to party at all times, but you gotta shoot for something, and why not shoot for the moon?

“Ideally, I would like to continue on [being a party ambassador], even when I’m in the dirt, or in ashes, however I go. The party spirit is perpetual, and it’s been going since before me as well. I’m just here contributing what I can to the legacy.”