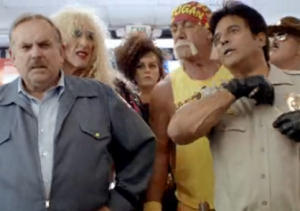 There were exactly three reasons to watch the Super Bowl this weekend: Bruno Mars’s explosive-as-a-grenade halftime show, Joe Namath’s seemingly Macklemore-inspired coat, and Radio Shack’s totally rad, ’80s-inspired commercial. (Please note, I did NOT include the Red Hot Chili Peppers on this list of must-sees…even they are from the ’80s.)

Radio Shack’s ad poked fun at its uncool, outdated image while somehow making being uncool and outdated seem like the coolest and hippest thing imaginable. “The ’80s called [on a landline, of course]. They want their store back,” said one spooked Radio Shack employee at the start of the spot.

And then the store got looted, to the soundtrack of Loverboy’s “Working For The Weekend,” by Dee Snider, Kid N Play, Erik Estrada, Mary Lou Retton, the California Raisins, Cliff Clavin from Cheers, the mechanical owl from Clash Of The Titans, ALF (who’s really having a moment right now), Q-Bert, Chucky from Child’s Play, Jason Voorhees from Friday The 13th, Hulk Hogan, the pre-MTV original Teen Wolf, and even Devo (who are enjoying the same moment as ALF).

And then they all took off in a DeLorean. Of course.