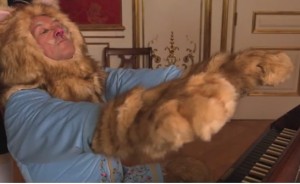 Fresh off his star turn playing “Locked Out Of Heaven” on Animal Planet’s Puppy Bowl half-time show, Keyboard Cat is now the star of another major televised event, the Academy Awards.

Totally stealing the thunder of everyone who was in that silly Ellen selfie, the ivory-tickling famous feline has been immortalized by two-time Oscar-winner Kevin Spacey in Jimmy Kimmel Live‘s epic production of Ameowadeus.

While the real Keyboard Cat, aka Bento, cites French composer Erik Satie, No Wave legend James Chance, the Velvet Underground’s John Cale, and shock-rockers GWAR as musical influences, his Casio stylings lend themselves well to Kevin’s spot-on portrayal as a classical-music kitty. I honestly have not witnessed such a fantastic pairing of a cat and a classical composition since Nora The Piano Cat’s first “catcerto” in 2009.

Let’s hope Ameowadeus scores an Oscar (or at least an Emmy or a Grammy) in 2015.

What to Expect From Keyboard Cat’s Puppy Bowl Halftime Show