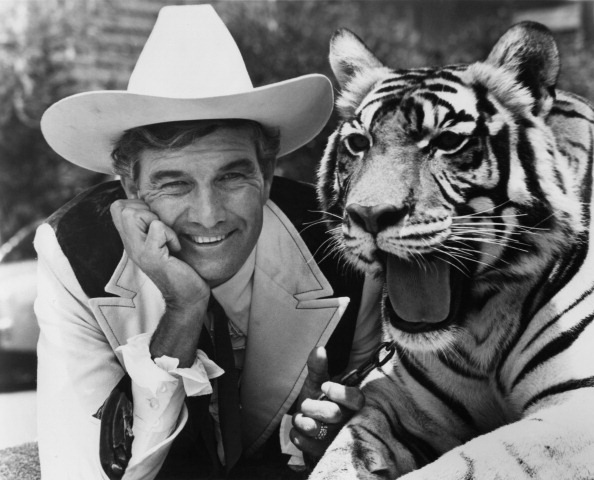 For nearly three decades, used-auto impresario Cal Worthington (who died today at age 92, R.I.P.) and his “dog Spot” ruled the L.A. airwaves with a series of low-budget, instant-classic, straight-to-UHF commercials. Of course, Spot was never an actual canine. The car cowboy’s trusty sidekick was portrayed from the ’60s through the ’90s by various zoo animals, all massive enough to match Cal’s outsized personality: a hippopotamus, a rhinoceros, a whale, a lion, an elephant, even a water buffalo.

But there was another, even more mythical creature that had a special spot in Cal’s asphalt menagerie: PUSSYCOW.

What was a pussycow, exactly? Some freakish, Island Of Dr. Moreau-like feline/bovine hybrid? And what the hell did that have to used with buying secondhand Chevys? My sister and I didn’t know, but we sure did like skipping around the house singing the “Pussycow” theme song at the top of our young lungs.

Our parents lyric-shamed us by informing us of our error. But years later we were exonerated when we discovered this Facebook group for the more than 69,000 people who also misheard the words; this punk band named after the jingle; this Spumco animated short; and multiple Worthington-death reaction tweets posted today by similarly confused fans, including one second-generation Hollywood star:

I mean this with most sincerity: RIP Cal Worthington http://t.co/LcCXEmylRX . Also, #pussycow

So rest in peace, Cal Worthington. And may the legacy of your mushmouthed diction live on in the four-legged form of my own “dog Spot,” Pussycow.