Come On Get Unhappy: Reuben Kincaid Has Died 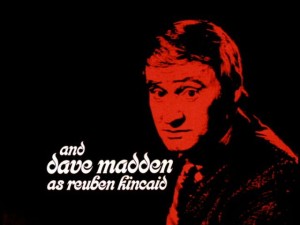 Everything I learned about band management and the music biz, I learned from Reuben Kincaid, the long-suffering Svengali of beloved ’70s sitcom band the Partridge Family.

Reuben never got to share in any of the Partridges’ recognition or rock ‘n’ roll glory. Keith was unfathomably handsome; Shirley was the comely WILF (Widow I’d Like To…); Tracy played impressively arrhythmic jazz triangle as if she’d been tutored by Philip Glass; Laurie could pick up radio waves on her orthodontia; Chris pulled off the even more perfect party trick of morphing into a totally different person in the middle of Season 2; and Danny already had a bright future ahead of him as a curb-vodka-swilling reality-TV hothead. But Reuben? Reuben didn’t even get to wear one of those snazzy burgundy velveteen suits. He had to sit on the sidelines in an itchy, camel-colored turtleneck.

But it was Reuben who made sure that his charges boarded their Mondrian-patterned tour bus and got to their gigs on time, made sure their fluffy Beethoven blouses were always dry-cleaned, and apparently taught the real-life Danny Bonaduce how to drive at age 10. He was the glue of The Partridge Family for four seasons, but now Reuben (or, more accurately, the actor who played him, Dave Madden) has sadly passed away at age 72, after a long illness.

I wish I could say that French Stewart, who reprised the Reuben role in The New Partridge Family, was capable of carrying on Dave Madden’s legacy. But that show got canceled in 2004 after one episode, so no.

To celebrate the man and the myth that was Reuben Kincaid, I present this rare clip in which he actually enjoyed a starring role, from the series’ “They Shoot Managers, Don’t They?” episode. Please note that as lovey-dovey as he may have seemed here, by the time this episode’s 30 minutes were up, Reuben had of course abandoned his temporary love interest to refocus on his true soulmates, the Partridges. Reuben was loyal to the very end, and clearly he was everything a band, fictional or otherwise, could hope for in a manager.