The Philip Seymour Hoffman Scene That Will Haunt Me Forever 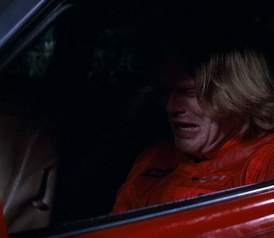 Today, Philip Seymour Hoffman died. It feels weird just to type that. He was truly one of the finest actors of our time, or of any time, and his death at age 46 is massive loss to to film community. It’s just a loss, period.

Many scenes could be culled from YouTube to demonstrate what an amazing actor Philip truly was. He did win an Oscar for Capote, after all. But I, along with many PSH fans, will always remember him for his squirm-inducing, can’t-look-away driveway scene from Boogie Nights. In a film full of uncomfortable moments (the “Sister Christian” scene; the “I’ll ask you if you’re my mom, and you say yes, okay?” coke bender with Rollergirl and Amber Waves; the scene when the future Dirk Diggler gets kicked out of his childhood home; that futile bathroom masturbation scene; “Feel Feel Feel Feel My Heat”), Philip’s Corvette meltdown may be Boogie Nights‘ most disturbing scene. But only because Philip made it all so real.

Anyone who’d ever made an unrequited pass at someone, who’d ever completely misread a crush’s supposed romantic signals, who’d ever wanted to crawl into a hole (or into the driver’s seat of a ’70s muscle car) to escape from the humiliation of public rejection, watched this scene in a darkened theater back in 1997 and felt Scotty’s pain. And those audience members realized that they were witnessing the rise of a true acting phenomenon. Anyone who didn’t realize that was the real idiot.

RIP, PSH. You will be missed. And you were not “uncool.”