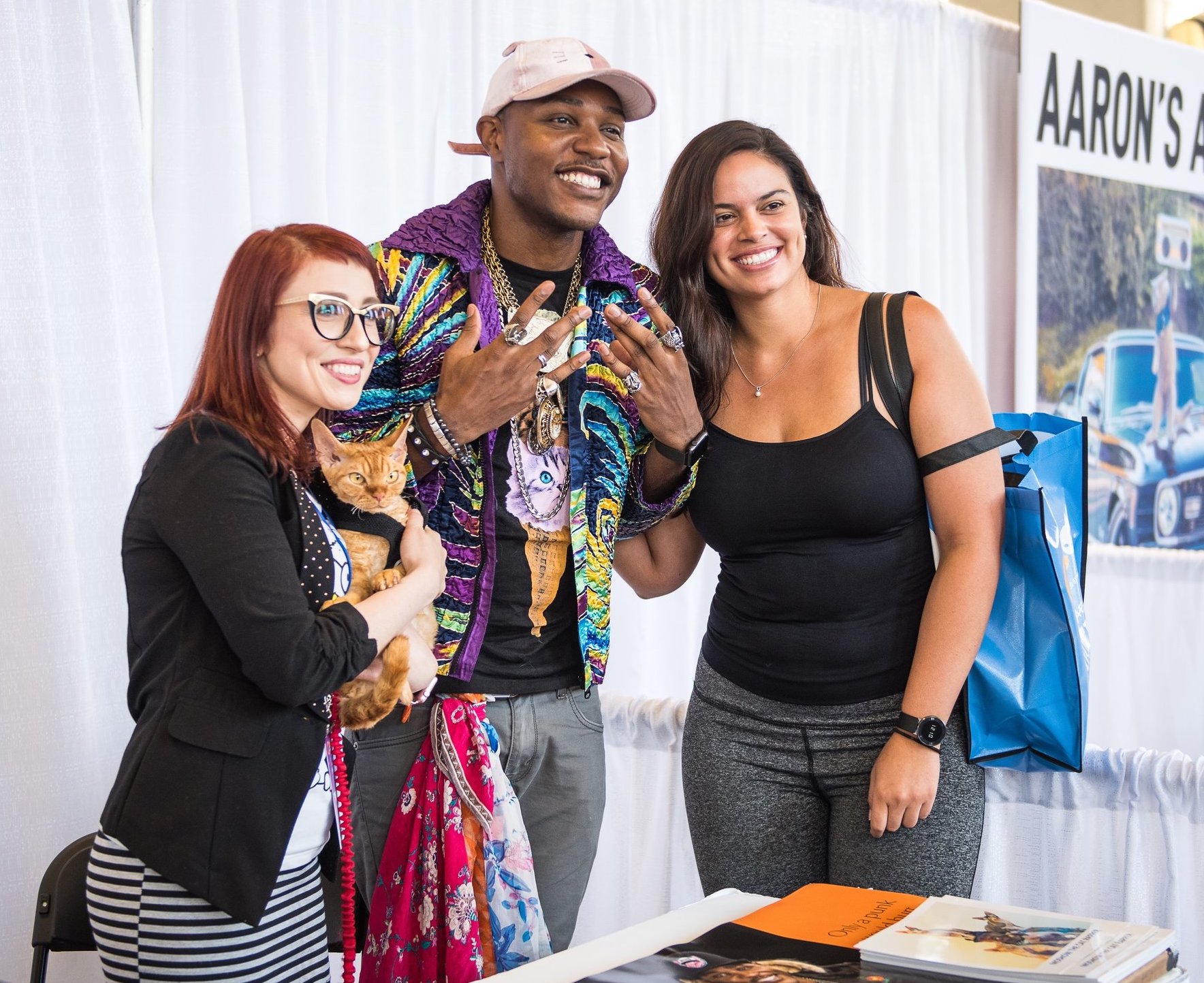 This year, International Cat Day (yes, it’s a real holiday) fell on a Wednesday, Aug. 8, so there was double cause for celebration. For the past five years, the self-described “internet’s premier cat rapper,” MoShow, as seen on Ellen, has been hashtagging #BeautifulCatLadyWednesdays every week as part of an earnest online campaign to erase the stigma against female feline fans.

“A lot of women would come up to me or write me and say how they were talking to a really attractive guy, and the moment the guy found out they had two or three cats, they automatically got moved into the ‘crazy cat lady’ vibe,” MoShow tells Yahoo Entertainment via phone from Portland, Ore. (where he lives with the five internet-famous kitties that make up his “Wu Cat Clan”).

“I never agreed with that. To me, it was always like, ‘Oh yeah, you got cats? Ooh, can I get closer?’ So, I had a problem with that [negative stereotype], and it would make me sad. So, every Wednesday, I dedicate that day to cat ladies. It’s my way of giving back and saying, ‘Hey, I appreciate you all. I don’t think you’re crazy. That guy is out there for you. Thank you for loving your cats so much. I see you, and I’m with you.’ It’s just my way of letting them know they’re all loved and appreciated and they’re beautiful.” 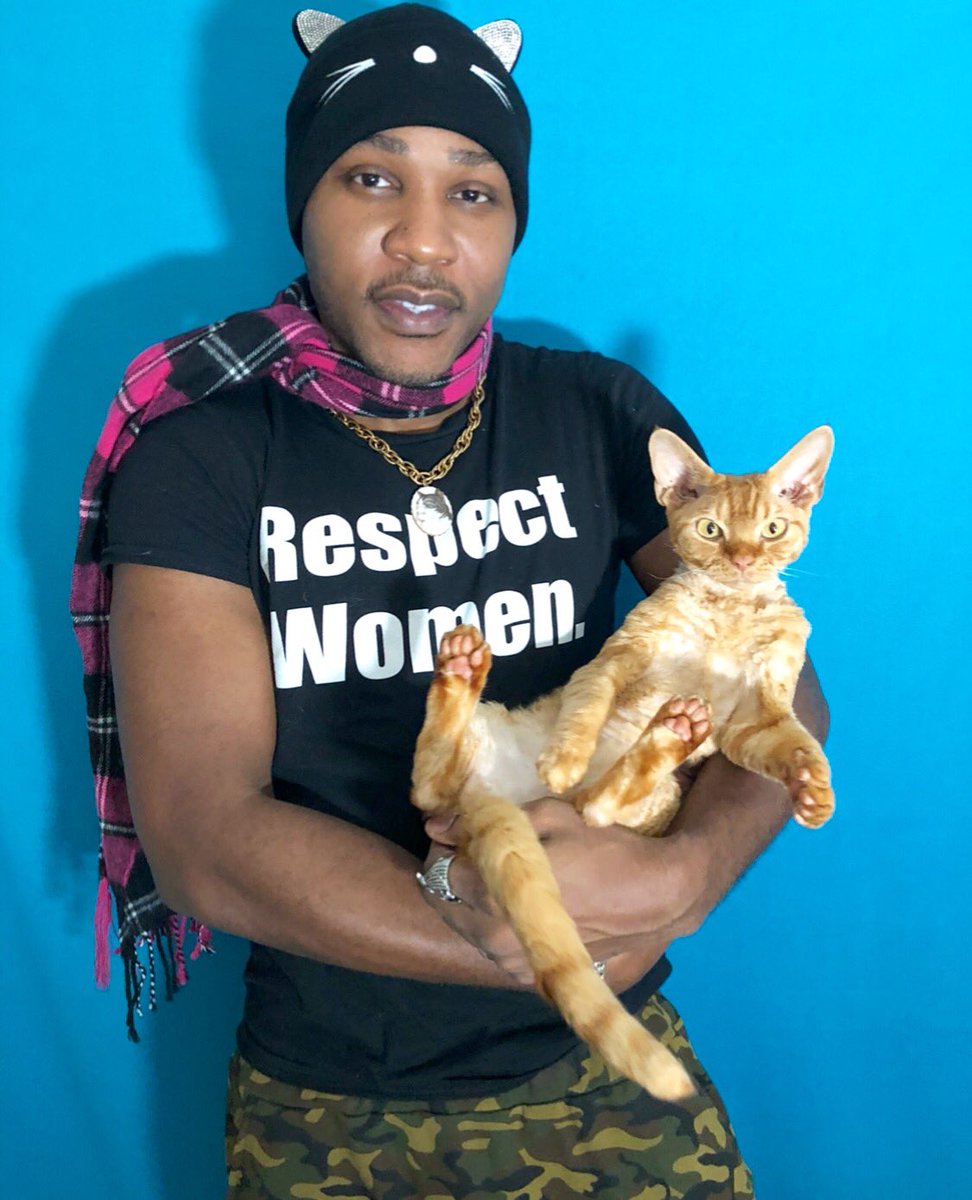 MoShow, whose real name is Dwayne Molock, estimates that cat ladies comprise “65 to 70 percent” of his fan base, and the audiences at his concerts range “from age 85 down to age 3,” although he often connects most with older women. “A cat lady could write me a long message saying something like how she was really sad and I inspired her day, or I have older women that’s in their 80s saying, ‘Hey, I’m in the hospital. I’m not doing very well. The only thing that’s been keeping me going is seeing your videos.’ He also recalls a 70-something cat lady who flagged him down in the supermarket and “broke down crying, telling me about how she had just lost one of her cats and she feels like the spirit of one of her cats is running through me. It’s really mind-blowing.”

It’s understandable that MoShow loves cat ladies: He’s actually been dating one since college. “I met a really cool, adorable young lady in my theater class, and she had a black cat named Queenie,” he recalls. “Queenie would watch me study downstairs in the basement, and as the months went on, she became closer and closer. The moment Queenie sat in my lap was when I got cat fever. And it just took over from there.”

Since then, MoShow has adopted five cats — Tali and her daughters Queen Sushi and Mega Mam, Black $avage (“the S is a dollar sign,” MoShow notes), and DJ Ravioli — who star in MoShow’s viral videos for fur-flying jams like “Cat Wine,” “Cat World,” and “Cat Emotions” and have lent their meows to his two Cat Love EPs. MoShow says Tali is the most recordable of the cats (“She’s the very talkative one, for sure”), but orange tabby Ravioli is probably the fan favorite thanks to a video of MoShow freestyling while he gives a surprisingly cooperative Ravioli a bath. That video has racked up 7.2 million views on Facebook, and a more recent clip of MoShow and Ravioli taking on Drake’s #InMyFeelingsChallenge is already at 14 million.

“Ravioli wants to record in the studio with me every day. He’s always rapping with me, taking baths. I can’t record without DJ Ravioli being in the studio. He won’t let me go by myself, so it’s just being around that energy and seeing that love and affection every day is what, I think, powers my main source,” says MoShow, although he stresses that he loves his cat-kids equally. “I never wanted to split them up and start making favorites or break them apart; I’m the cat rapper, and this is my gang, my entourage that I roll with.”

However, MoShow does feel a special connection to his three sphynx cats (Tali, Sushi, and Mega Mam), because they’re “the undercats of the cat world; some people don’t even consider them cats!” MoShow, who eventually put himself through college and graduated with a degree in computer science, always felt very “alienated” and “judged” at his privileged, gifted-students’ high school while growing up in the Baltimore projects, so he “identified with sphynx cats more. I felt like those were the most underappreciated cats, and I could relate to that. I feel like the undercat, the underground person that people thought wasn’t going to make it.”

MoShow began rapping when he was 16, but he didn’t really “make it” until he realized that cat-focused hip-hop was his true calling about six years ago. “The problem was when I was rapping before, I never wanted to rap about a life that I didn’t live. But I did love cats. I love a cat lady. I’m a positive guy. So, with all of those things being said and me not being a ‘gangster,’ I decided I wanted to actually live my truth and just rap about who I really am. That’s why I rapped about cats. I felt it was just me being my most authentic self.”

At first, MoShow says, “People called me crazy and laughed at me,” but now he’s amassed a devoted following, playing regular club gigs as well as special cat events (like last weekend’s CatCon in Los Angeles), and turning former doubters into hip-hop fans. “A lot of my cat family has told me that they are not fans of rap, but for some reason I’ve made them love rap music,” he says. “I take that as the highest compliment, coming from people in their 80s, you know? It’s cool to see that I’ve shown them a different side, that I’m getting them to listen to some new things.”

MoShow doesn’t perform concerts with his cats, because he thinks the noise and chaos would stress them out, but they do seem incredibly relaxed in his videos, whether he’s dressing them up (“They love wearing clothes!”), walking Sushi on a leash, or bathing Ravioli. And that’s because the cats seem to love MoShow as much as MoShow loves cat ladies.

Sorry for the last post, ive been spending some alone time with my cat Queen Sushi, shes in one of her MOODS right meow. Retweet this if we just put a smile on your face. Which was the goal we were aiming for pic.twitter.com/m7E4KNXgqN

“They’re very obsessed with me. I’m obsessed with them,” MoShow laughs. “It’s just a full trust thing, to be honest with you. They jump on me, and then we take a selfie. They look in the camera, and they just sit there. We’re shooting a music video, and they’re on my shoulder, and they just stay there. We have a real connection.”

Along with spreading the love for misunderstood cat ladies, MoShow spearheads other cat-related campaigns, including discouraging declawing and encouraging the adoption of stigmatized black cats like his own beloved Black $avage. He also regularly visits animal shelters and takes pictures with cats to help find them homes, as shown in his “Adopt a Cat” video with the Oregon Humane Society. Which brings up the question: Will he ever adopt more cats to add to his entourage? “I can’t drop any secrets, but I’m pretty sure me and you both know I’m not done yet,” he answers with a chuckle. “I will say that I already have names picked out.”

MoShow is clearly a sensitive guy, so when asked who his dream musical collaborator would be, perhaps his pick isn’t such a surprise. “If I ever got a chance to work with someone, I’d like to work with James Taylor. He’s my favorite,” MoShow gushes. So, perhaps a remake of “You’ve Got a Friend” with MoShow, Taylor, and Ravioli will take place someday. The beautiful cat ladies out there would surely love that.