What to Expect From Keyboard Cat’s Puppy Bowl Halftime Show 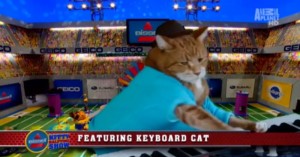 Bruno Mars and the Red Hot Chili Peppers are set to play this Sunday’s Super Bowl halftime show, and while they’re sure to deliver a phenomenal performance, fans who don’t want to get locked out of kitty heaven ought to switch over to Animal Planet, where Internet-famous feline Keyboard Cat is playing the 10th annual Puppy Bowl.

Backstage this past weekend at Los Angeles’s Internet Cat Video Film Festival, the cat of the hour himself spoke to Yahoo Music (via his interpreter/owner, Charlie Schmidt) about just what to expect when the fur flies this Sunday afternoon.

“Keyboard Cat’s going to perform live, a Bruno Mars song, ‘Locked Out of Heaven.’ He’s going to wear a little Bruno hat, and he’s just gotten his licks totally down. In the foreground, it’s just Keyboard Cat wearing his cool blue shirt and his Bruno Mars hat and doing his thing, just hitting the ivories hard. He really knows and feels this music! And then in the background there will be a cheerleader sort of thing with real penguins, and then another cat’s going to parachute into the arena.”

Whoa. And if penguin cheerleaders and a parachuting cat aren’t enough to persuade you to touch that dial, the Puppy Bowl halftime show will also feature a pyramid of 30 live kittens and via-satellite participation from another one of the Interweb’s most beloved cats, Lil’ Bub.

“On the other halftime show with Bruno Mars — or the other Bruno Mars — they added Red Hot Chili Peppers just last week, because they were feeling the heat when we announced that Keyboard Cat was going to be on,” Charlie bragged.

Keyboard Cat, whose real name is Bento, already has five albums on iTunes and cites French composer Erik Satie, No Wave legend James Chance, the Velvet Underground’s John Cale, and shock-rockers Gwar as musical influences. (Ironically, there was a grass-roots online campaign to get Gwar to play the Super Bowl. Perhaps they can back up Bento at the Puppy Bowl instead?) But Bento’s biggest influence is probably the original Keyboard Cat, aka Fatso, who died in 1987, two whole decades before his vintage video — shot by Charlie in ’84 — hit YouTube and racked up almost 35 million views.

And perhaps Fatso’s legacy is a larger one to live up to than Bruno’s. How does Bento deal with all that pressure? “It’s pressure on all of us, really. It’s pressure on him, on me…it’s pressure on the public to respond, you know?” mused Charlie. “But fortunately, people love him, because he makes them happy.”

Puppy Bowl X airs on Animal Planet this Sunday opposite Super Bowl XLVIII, then will re-air five more times. So expect Keyboard Cat 2.0 to rack up millions of additional views this weekend.