“Weird Al” Yankovic has been nominated for 14 Grammy Awards, and he’s won three times — which, ironically, is more than can be said for many of the artists that he has parodied over the years. He’s likely to win a fourth trophy this Sunday, for Best Comedy Album (even if he is going up against humor heavyweights like Jim Gaffigan, Louis C.K., Patton Oswalt, and Sarah Silverman), as he’s just had of the biggest year of his career yet, with his Mandatory Fun becoming the first comedy record to ever debut at No. 1 on the Billboard chart. 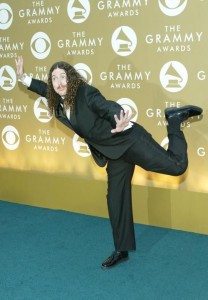 Yahoo Music was thrilled to have a little pre-Grammy celebration with Al this week, as he invited us into his home to check out his private Grammy collection. Many questions were asked and answered: What did he wear to the ceremony, and whom did he thank, when he won his first Grammy back in 1985? Will he really wear his lucky Hawaiian-print underwear to the Grammys this week? Why are Grammy statuettes from 2003 so much bigger than the ones handed out in 1989? Will an awkward moment ensue if he runs into Lady Gaga at this year’s awards? How did he master the Michael Jackson choreography for the video for his Grammy-winning “Eat It”? And how long did it take for him to squeeze into the fat suit he wore in the Grammy-winning “Fat” video?

It’s mandatory that you watch this interview. It’s a lot of fun. And for more fun, you can see Al on tour starting May 12; go to weirdal.com/tour for all the dates.