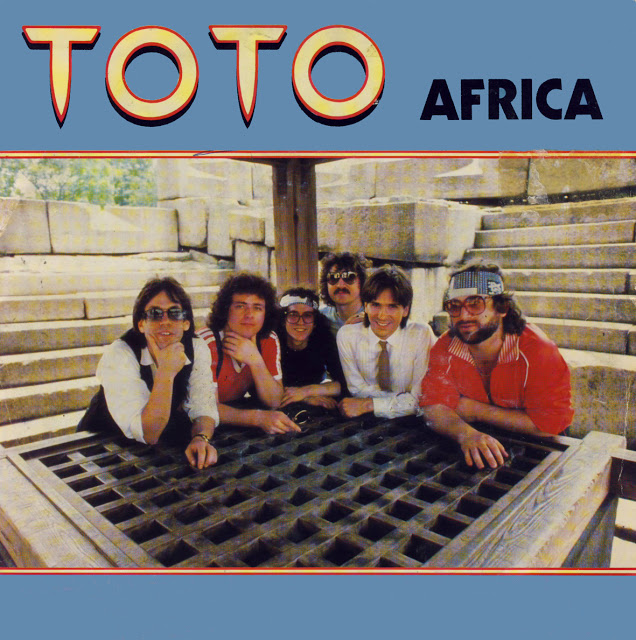 “I think it was kind of sinking in just how big it was becoming. Maybe it was just my imagination, but I thought maybe on [Weezer leader] Rivers Cuomo’s face, there was an expression like, ‘Oh s***, I might have to play this the rest of my life.’”

Toto keyboardist Steve Porcaro is talking about that time this past June when he dropped in on Weezer’s Jimmy Kimmel performance of Toto’s beloved 1982 smash “Africa.” Cuomo and company had recorded the song on a dare — they were responding to a 15-year-old fan’s tireless internet crusade to get Weezer to cover the song, after she heard it on Stranger Things — but their version turned into a true phenomenon, surprisingly becoming the alt-rock band’s first Hot 100 hit in eight years. (Toto just returned the favor by covering Weezer’s “Hash Pipe,” which is being rush-released by Republic Records this Friday, Aug. 10.)

However, it almost sounds like Porcaro could be talking about himself. He took a 27-year-break from Toto but rejoined in 2010 — just as “Africa” was starting to take on a new life in the digital age. (Here are FORTY-ONE cover versions and 17 internet memes, if you feel like going down an “Africa” rabbit hole). As sure as Kilimanjaro rises like Olympus above the Serengeti, Porcaro will playing the song for the rest of his life. And he didn’t even like “Africa” as first.

Porcaro explains that it was Toto vocalist David Paich’s ambitious but somewhat cringeworthy lyrics that had him and his bandmate Steve Lukather thinking “maybe it should be on Dave’s solo album or something. … We liked [the song], but the lyrics and stuff, we were going, ‘Dave, Serengeti? What the f*** are you talking about?’ We all gave him s*** about it. We all were like, ‘What the hell? What is this?’

“It was David really trying to make a concerted attempt at good lyrics, at actually telling a story, actually having a narrative and not just rhyming ‘heart’ with right there from the start,’ or whatever,” Porcaro elaborates. “Sometimes, to be honest with you, our lyrics were written a day before the vocal had to be done. There was no real poet in the band, but we tried. I have to say, ‘Africa’ was an attempt by Dave to up his game.”

Porcaro laughingly admits that Paich’s ode to a continent he’d never actually visited probably wouldn’t fly into today’s politically correct age, but says even back in ’82, “Believe me, there were a lot of people that were kind of bugged that a bunch of white guys from the [San Fernando] Valley had a big hit song called ‘Africa.’ But it all comes from a missionary fantasizing about getting back there. Or something.”

An amused Porcaro also agrees that the Steve Barron-directed “Africa” music video, with its generic safari and tribal imagery, hasn’t aged so well. “First of all, you’ve gotta consider any of the videos we made, any of those ones in those first years there were just, they’re all f***ing horrible,” he chuckles. “This is long before CGI, and we always had these great ideas and fantasies of stuff to do, but on video and with the budgets we had, it just was horrible. It was a lot of insensitivity, especially as maybe as far as the ‘Africa’ video goes. But the song was about a fantasy.”

Thirty-six years later, however, the world has nothing but love for “Africa.” It’s gonna take a lot to drag fans away from this song. These are not some long-forgotten words or ancient melodies. That dated ‘80s music video? It actually has 357 million views on YouTube. “Africa” has been sampled Nas, Xzibit, Ja Rule, Wiz Khalifa, Jason Derulo, and JoJo, and, despite its tricky, polysyllabic wordiness — particularly that baffling “Serengeti” line — it’s been covered by not just Weezer but by what seems like a hundred men or more, including CeeLo Green, Howie Day, Eric Benet, Relient K, Avant, St. Lucia, Quietdrive, and Chris De Burgh. (Porcaro’s favorite viral cover is the “pizza guys,” aka Utah’s part-time pizzeria performers/full-time attorneys Mike Massé and Jeff Hall, whose acoustic rendition has been viewed on YouTube almost 11 million times.)

“From day one, this song was a strange bird. And then, over the years, there’s always been these versions creeping in. Choirs doing it. A duo from a bar somewhere, absolutely killing it. It’s never stopped. And it seems to have finally reached the climax with this Weezer thing,” Porcaro marvels.

The use of “Africa” in pop culture is even more entertaining and unexpected. Hop online and you’ll find an “Africa” bot randomly tweeting the song’s lyrics and www.ibless.therains.downin.africa, a site that broadcasts the “Africa” music video on a constant loop. And along with the Stranger Things teen-bedroom makeout scene that inspired the above-mentioned Weezer’s fan’s Twitter marketing campaign, Jimmy Fallon and Justin Timberlake belted it in a hilarious summer camp skit; the song was covered by fruity cartoon band the Member Berries on South Park; it was Joe and Bonnie Swanson’s love theme (and lap dance theme) on Family Guy; none other than Betty White warbled it on Community; and the ‘80s-themed Cartoon Network series Moonbeam City brilliantly spoofed it as “Aquatica.”

Dax Shepard and Kristen Bell even shot an entire “Africa” music video during their recent African vacation. “I took my daughters out to the movies just a couple weeks ago, and there [Sheppard and Bell] were, at the same movie theater. I was too shy to say anything,” Porcaro laughs. “My daughter went up to them and said something, and they came up and said hi to me. They were real sweet.”

Porcaro is thrilled by all of these parodies and homages — “You’re talking about a bunch of Valley dudes who grew up on TV; we just love that stuff,” he gushes — but his favorite pop-culture tribute is a Scrubs scene with Zac Braff singing the song in the bathtub. “The episode opened up on [a close-up of] his iPod, and that just completely cracked me up. It’s well known what a lover of music Zach is; he picked a lot of the music on that show. I was waiting for some punchline to dis the band or whatever, but it wasn’t that at all. It wasn’t a dig.”

And that’s the key point here: The internet’s love for “Africa” is whole-hearted and wholly unironic, much like the way younger music fans have embraced and celebrated Journey’s “Don’t Stop Believin’” thanks to placements of that song on The Sopranos, American Idol, and Glee. While Toto sold millions of records and won six Grammys (including Album of the Year for Toto IV) back in their heyday, and always had the respect of their peers for their musicianship, they were never considered hip until relatively recently. Instead, they were often dismissed by journalists and snobs as corporate rock. “All that stuff that they’re calling ‘West Coast music’ now, or ‘yacht rock,’ all that slicked-out, polished-to-s***-so-that-there’s-nothing-resembling-anything-authentic, critics hated all that stuff,” Porcaro recalls.

“Believe me, we were all very comfortable in our own skins; it wasn’t like we’d been going through life carrying some grudge because we weren’t vindicated,” Porcaro stresses. “But some groups like Weezer, I’m sure there was a time when they wouldn’t have given us the time of day. There’s this is kind of respect now, you know? [People realize] we weren’t just some corporate rock guys, that we started off as a garage band. We’re just feeling supported and rooted for.”

Porcaro isn’t frightened of this thing that “Africa” has become; he says he’s “surprised and delighted as anybody” by its continued popularity. (“The song has just grown on me over the years, what can I say?”) But he doesn’t have much of a theory as to why it’s so popular, except that “the singalong chorus just pays off for everybody.” And he admits that he has “mixed feelings” about the recent craze for yacht rock and soft rock in general.

That is why, when Toto decided to cover a Weezer song, they went with a rather straightforward version of 2001’s stomping, hard-charging “Hash Pipe,” rather than a softer, gentler number like “Island in the Sun,” which might have been a more obvious choice for a band so closely associated with the “yacht rock” scene. Porcaro, who produced Toto’s “Hash Pipe” single, reveals that he actually at first had an idea to cover Weezer’s “Beverly Hills” as a “very stereotypical Toto kind of thing, with some great harmonies, a real ‘Africa’-esque kind of thing,” but explains that he “wanted to show that Toto really started off as a garage band, playing hard rock. If you listen deep to the Toto catalog, starting with ‘Hold the Line,’ we’ve always had a hard rock element in our music.”

Toto’s official “Hash Pipe” single drops this week, but they also have new original material in the pipeline that they hope will connect with their new, younger audience. (“I know that’s usually the time for a concert bathroom break with legacy bands like us,” Porcaro laughs, “but we’re truly excited about our new music. We think in some ways we’re doing our best stuff, believe it or not.”) A Toto boxed set out later this year will feature nine new tracks, five of them unreleased tunes recorded back in the day with Porcaro’s brothers and bandmates, Jeff and Mike Porcaro, who respectively passed away in 1992 and 2015.

So, how does Steve think Jeff (who co-wrote “Africa” with Paich) and Mike would react to all this “Africa” love in 2018? “They’d love it,” he says happily. “They’d absolutely love it.”