The Winning, Wild, and WTF Moments of Eurovision 2016 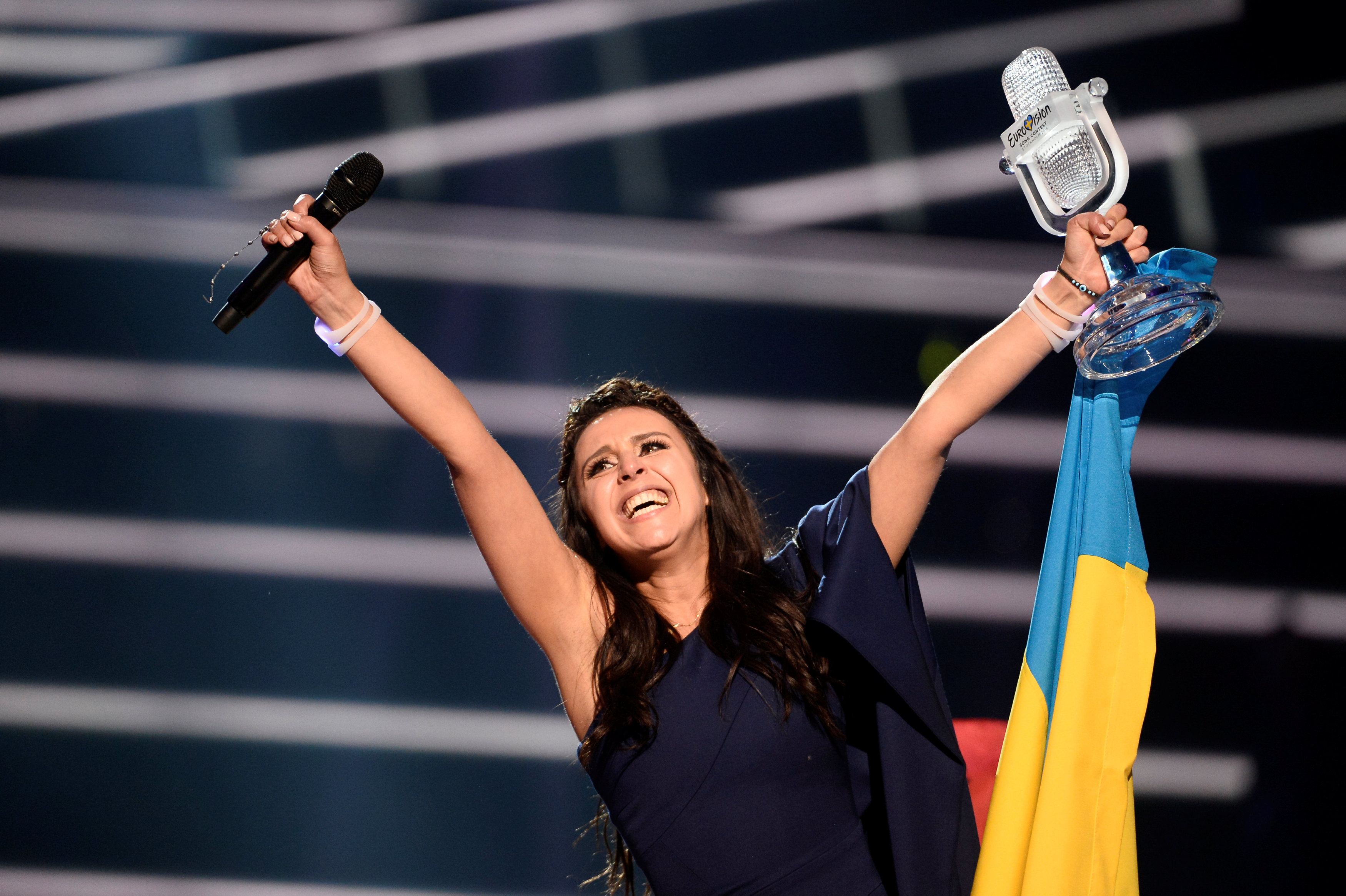 Long before American Idol — before Star Search, even — there was the Eurovision Song Contest. The United Nations of talent competitions, held every year since 1956, Eurovision features singers from across Europe competing over five days, with each country submitting an original song to be performed on live television. It’s one of the most-watched broadcasts in the entire world, with an average annual audience of 200 million viewers in 45 countries.

Or make that 47 countries! Yes, it took 60 years, but for the first time ever, the Eurovision Grand Final aired live in both China and (on the Logo network) in the U.S. this Saturday. America’s sweetheart, Justin Timberlake, even made an appearance. (Important side note: For some odd reason, JT’s performance of “Can’t Stop the Feeling”/”Rock Your Body” did not air on Logo. But thanks to the Interweb, we can all still see it. Justin can’t be stopped, not even by silly broadcast restrictions!)

Eurovision, which took place in Stockholm, Sweden, this year, is perhaps the only televised talent competition more over-the-top than Logo’s premier show, RuPaul’s Drag Race. It is seemingly untouched by time or taste, with contestants wearing Spandex-’n’-sequins outfits and executing variety-show dance moves that wouldn’t have been out of place during the famously career-launching 1974 Eurovision number by Sweden’s own ABBA. An actual drag queen, Austria’s “Bearded Lady” Conchita Wurst, even won Eurovision in 2014. So Eurovision and Logo were a perfect fit, Timberlake omission not withstanding.

Twenty-six countries competed at the Eurovision 2016 Grand Final, with Ukraine’s Jamala prevailing with her operatic, self-penned “1944″ — a political power ballad about ethnic cleansing and the deportation of the Crimean Tatars in the ’40s by Russia’s Joseph Stalin. The song was inspired by the harrowing real-life tale of Jamala’s great-grandmother, and also served as a critique of Russia’s annexation of Crimea in 2014. “1944″ was certainly an unchacteristically serious moment for the usually campy Eurovision, but Jamala belted the song with pain and passion that swayed voters worldwide. (To add to the politically charged climate of this year’s Eurovision, Ukraine won over Russia’s “You Are the Only One,” which had been the odds-on favorite to win, but lost out after a last-minute reveal of the public votes.)

However, as emotional as “1944″ was, it didn’t get my vote. (Side note: Americans were actually unable to vote in Eurovision. Logo needs to fix that next year!) Below, ranked, are my personal top 10 performances of Eurovision 2016 — along with how the official, international votes panned out.

Yes, I know Australia is not part of the continent that puts the “Euro” in Eurovision. So? An exception should of course be made for this dynamite performer. (To clarify, Australia started participating in Eurovision last year, somewhat controversially.) The Season 5 X Factor Australia champ channeled circa-2008 Lady Gaga with her sculptural bubble-gown, blunt bangs, and booming vocals. All that was missing was the disco-stick, really. As for “Sound of Silence,” it clearly had nothing in common with that Simon & Garfunkel song (it’s basically the loudest song about “silence,” ever), but on Saturday, it sounded like an instant Eurovision classic.

The Least Cheesy Performance Award goes to this hard-charging hipster band. This basically seemed like the Gallagher brothers’ long-lost Georgian cousins playing a long-lost outtake from Kasabian’s first album at Glastonbury. (It’s no wonder, then, that this Anglophilic song received the allotted 12 points from England’s professional jury.) Kudos to the trippy, psychedelic production, too, which almost made it seem like the scruffy indie rockers were competing at Eurovision 1969. The colors, the colors!

This asymmetrically emo-haired former child star, onetime X Factor Bulgaria judge, and Eurovision 2009/2011 veteran delivered a vivacious, adorable performance that came across like a Robyn-fronted Spice Girls starring in an off-off-off-Broadway musical production of TRON. What’s not to love?

The Best Production Award goes to this seemingly Sprockets-inspired number. Lazarev (one half of the popular, double-exclamation-pointed Russian pop duo Smash!!, and a former member of a children’s group featuring members of t.A.T.u.) began by dramatically casting shapes like a visitor at a Children’s Museum shadowbox display, then he bravely climbed inside what looked like wall-sized versions of Asteroids and Q-Bert video-game consoles. This performance was a smash (!!), indeed.

The Sanrio- and Kpop-obsessed winner of The Voice Germany Season 5 hit the stage looking like Gwen Stefani’s Harajuku Girls threw up all over her. And her cutesy performance made it seem like she’s watched Avril Lavigne’s “Hello Kitty” music video a few too many times. Despite all the awkward cultural appropriation, I thought she pulled off her performance of this Halsey-lite track nicely, but voters didn’t agree: Jamie came in dead last.

Not the similarly titled Moby tune, “Made of Stars” is instead an empowerment-anthem power ballad, accompanied Saturday by pyro-laden production that made it seem like Star was singing his coronation song on the Israeli Idol finale. (Star actually competed on Israel’s version of Idol, Kokhav Nolad, in 2009, so this makes total sense. Pretty much every Eurovision singer this year seemed to be an Idol, Voice, X Factor, or Got Talent veteran.) The openly gay Star lived up to his surname as he served what Logo commentator Michelle Collins called “Adam Lambert realness” – a triumph after he reportedly experienced homophobic bullying by Russian border police officers last month while on tour promoting “Made of Stars.”

A 10th place contestant on Croatia’s Got Talent and the winner of the first season of The Voice Croatia, Miss Kraljic — the biggest pop star in her native land — gave me the instant impression that talent shows in Europe are much, much cooler than what we Yanks get on Fox and NBC. The ethereal worldbeat diva appeared in a Homogenic-era Bjork kimono that Drag Race’s own Kim Chi would probably love to borrow for Logo’s Season 8 Drag Race finale. And before the chorus, she’d already undergone a dramatic costume change, serving Madonna-at-the-1991-Oscars realness in an Old Hollywood column gown. Her vocals admittedly wavered on the massive song, but what Nina lacked in perfect pitch she made up for with impeccable show-woman-ship and fashion flair.

Celine Dion, who won Eurovision 1988 (representing Switzerland), publicly endorsed this Israeli-French singer-songwriter — and that’s gotta count for something, right? A veteran of both Israel’s Kokhav Nolad and The Voice France, Amir didn’t put on the flashiest or splashiest performance, but “J’ai cherché,” which he co-wrote, was one of this year’s catchiest contenders.

The X Factor Poland rocker runner-up claimed his “style icon is Marilyn Manson.” Logo commentator Carson Kressley added, “Maybe with a little Kenny G thrown in.” I thought Michal looked a bit like Weird Al emceeing the Ringing Bros.’ circus, personally. But he belted his ballad with all the earnestness of Michael Bolton in his ponytailed prime. And that tuxedo jacket was working for Michal. Clearly the color of this guy’s life is red.

Such eleganza! Why do I feel like if there were ever a RuPaul’s Drag Race Armenia, every queen would lip-sync for her life to “LoveWave”? Incidentally, Iveta is a veteran of both The Voice Germany and the coolest-titled talent show ever, Hay Superstar. When will Logo start broadcasting Hay Superstar Stateside, too?

They didn’t have the best song in this year’s competition by a longshot. But Minus One (a former cover band fronted by The Voice France contestant Francois Micheletto) deserve a semi-honorable mention for putting several of its members in faux-iron onstage cages, like something straight out of a vintage Scorpions music video. Are we sure these guys weren’t representing Germany?