The Best ‘Portlandia’ Musician Cameos Ever 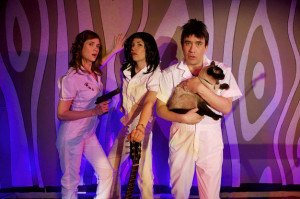 IFC’s sleeper-hit sketch comedy show Portlandia, helmed by punk musician-turned SNL cast member-turned-Seth Meyers bandleader Fred Armisen and Sleater-Kinney/Wild Flag guitarist Carrie Brownstein, returns for a fourth season this Thursday. And with Season 4 will surely come a slew of guest appearances by various hipster actors and comedians. But we here at Yahoo Music are especially looking forward to all the cameos by Fred and Carrie’s musical friends (like confirmed future guest k.d. lang), since a typical Portlandia cast listing often reads like a who’s-who of indie rock.

The dream of the ’90s is clearly alive in Portland, judging by the many past Portlandia appearances by that decade’s grunge-rock elite. But all sorts of cool musicians have graced the show. To celebrate Portlandia‘s long-awaited return, I’mranking the best musician cameos in the series’ history. (Note: This is an article best read by the bedside glow of an artisanal lightbulb.)

11. No Doubt – On the “Nina’s Birthday” episode, Nina received a hella good present from her biker boyfriend, Lance: a private hot-air balloon ride with the recently reunited No Doubt. While Gwen Stefani refused to dish about how she and her own significant other, Bush’s Gavin Rossdale, celebrate her birthday, I’m kind of dreaming that question will be answered in Portlandia Season 4…when the reunited Bush hopefully make a cameo in a “Lance’s Birthday” sequel skit. Make it happen, IFC.

10. Isaac Brock – The Modest Mouse singer was neither modest nor mousy when he landed in the middle of a heated rock ‘n’ roll debate with the Krautrock-loving, literally too-cool-for-school parents at Portland’s exclusive Shooting Star pre-school. However well-intentioned, Isaac’s attempt to donate his old Temple Of The Dog and Back To The Future albums to the school’s library was not appreciated. I totally would have taken that Talk Talk record off his hands, though…

9. Steve Jones – In Portlandia‘s most surreal and ambitious skit yet, the Sex Pistols’ fearsome axe-slinger brought just the right amount of punk-rock menace to his role of the nasty bouncer of “Brunch Village.” I’ve been scared to eat eggs Benedict ever since.

8. Johnny Marr – Johnny is usually a pretty easy-going guy. (He survived being in a band with Morrissey for years, after all — and with that Temple Of The Dog-loving Isaac in Modest Mouse!) But he nearly lost his cool when he had to contend with Portland’s two most inept bicycle valets. The only thing that would’ve made this skit better? If Johnny had busted out some “Please, Please, Please, Let Me Get What I Want” when he finally spotted his red two-wheeler sitting atop that bicycle scrap heap.

7. Jack White – It was a Jack White Christmas for the vaguely holiday-themed “Winter In Portlandia” episode, when the White Stripes/Raconteurs/Dead Weather mastermind magically showed up one snowy silent night to book time in an analog-obsessed character’s long-vacant, vintage-gear-packed studio. I’m still hoping Jack actually recorded his next Third Man Records 7-inch there.

5. Dirty Projectors and J. Mascis – Quiet was definitely the new loud, and the new awesome, when Featherwash (a Fred-fronted Dirty Projectors) and Bless The Barn (featuring usually-much-louder Dinosaur Jr. figurehead J. Mascis) went very, very unplugged for Portland’s “Battle Of The Gentle Bands.” But unfortunately, both bands were out-soft-rocked by the super-mellow sounds of Franny Wisp. Try to be gentler next time, guys.

Johnny Marr on How the Smiths Helped ‘Wipe Out Jock Culture’

No Doubt’s Tony Kanal and AFI’s Davey Havok on Supergroup Dreamcar: ‘An Opportunity to Press the Reset Button’