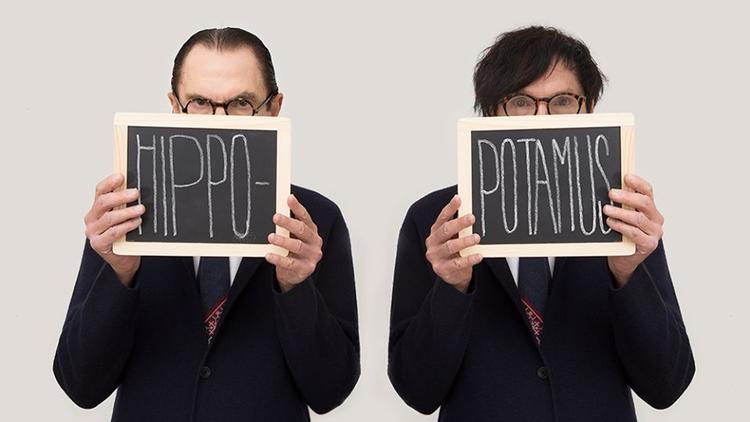 When music aficionados think of legendary Los Angeles bands, the Beach Boys, the Doors, Love, or maybe even Guns N’ Roses come to mind. One act that usually goes unmentioned is Sparks — despite that fact that the group’s Mael brothers, Russell and Ron, grew up in the seaside L.A. suburb of Pacific Palisades; got their start on the Sunset Strip in the early ‘70s; scored their biggest commercial hit, “Cool Places,” with Hollywood pop-rock princess Jane Wiedlin of the Go-Go’s; and even recorded an ode to the ultimate SoCal attraction, Disneyland. But Sparks, with their absurdist lyrics, theatrical stage style, and dabblings in everything from art-pop to synth-pop to chamber-pop, always seemed just too weird to hail from the land of fun and sun.

As the brothers chat about their 25th studio album (and first album under their own name in eight years), Hippopotamus, we confess that for years we thought Sparks hailed from eccentric England, or from Germany, or Sextown USA. Or maybe even from outer space. “We’ve had French, too,” chuckles younger brother and Sparks singer Russell (an interesting observation, considering that one new Hippopotamus track is a tribute to Edith Piaf, and that the Maels are collaborating with French filmmaker Leos Carax on the upcoming movie musical Annette). With whimsical new songs titles like “So Tell Me Mrs. Lincoln Aside from That How Was the Play?,” “Life With the Macbeths,” “What the Hell Is It This Time?,” and “I Wish You Were Fun,” it’s clear that Sparks are still weird after all these years — and are definitely still fun.

Self-declared Anglophiles, Ron and Russell take being mistaken for Brits as a major compliment. “When we first started out, we were trying to pretend like we were a British band, and so then we finally moved to England after a couple of albums, just because there was no acceptance for us in our hometown, and there was this massive acceptance just for the first album we released there,” Ron says. (Sparks’s first big breakthrough came in 1974, when their madcap single “This Town Ain’t Big Enough for Both of Us” went to No. 2 on the U.K. charts.) “And then when we came back to play in Los Angeles, they would list us on the marquees as ‘From England’! You know, we didn’t ever want to correct anybody about that, because we were living our dreams and pretending that we were a British band.”

Sparks didn’t exactly receive a heroes’ welcome whenever they returned to Los Angeles, where hairy, jammy artists like Little Feat and Johnny Winter ruled at rock clubs like the Whisky A Go Go. Sparks amassed a devoted cult following, but Ron recalls, “There would be this kind of audience divided right down the middle, half throwing things at us and then half not. … We feel that musically we were on that same level [as those other bands], but we always felt that the flash angle and what you’re doing onstage matters as much as what you’re doing musically — that it doesn’t detract from your musical credibility to be doing something interesting and even theatrical onstage. Those early times were difficult. And that was why we moved to England.”

Sparks rode the glam wave in early-‘70s England, even though, as “two guys from Los Angeles,” they “never really felt that we were 100 percent part of that scene, either,” admits Russell. However, their Anglophilia really worked to their benefit in the new wave ‘80s, shortly after they reinvented themselves as a synth duo with the help of legendary producer Giorgio Moroder. MTV, radio, and roller-rink DJ booths at the time were dominated by U.K. import acts — and nervy Angst in My Pants cuts like “I Predict” and “Eaten by the Monster of Love” (the latter appearing in the cult teen flick Valley Girl) fit right in.

“That’s the other odd thing — that everyone that is aware of Sparks has their period when they jumped into being aware of the band,” says Russell. While the original MTV generation discovered Sparks around 1982, other fans have their own favorite Sparks eras. “Like, in Germany, we’ve had hits that people don’t know about in other countries, like a song called ‘When Do I Get to Sing “My Way”’ was really popular — but specifically there. And then we’ve had things in France that have worked just in France: ‘When I’m With You’ was a really huge hit there. So people jump aboard finding out about Sparks in different times. And it’s always really curious to us. … We always manage to get a new, younger audience coming aboard later on, and they’re just as excited and passionate about Sparks as people getting on board 30 years ago. It’s a really odd thing for us.”

However, when asked to name their own favorite Sparks era, the Maels would rather focus on Hippopotamus than glorify their past. “I mean, there’s different times that have been just special for us,” Russell begins. “The period with Giorgio Moroder with the No. 1 in Heaven album was really special because it was sort of the three of us, Giorgio and Ron and I, not knowing what was going to be the end result of it. And I think that kind of naiveté when you go into something and not knowing what you’re going come up with was really special. And it was one of those albums that kind of set this blueprint for working a duo, and working with electronics, and working with more danceable stuff. But we’ve had other periods throughout our career, also, that are just of special for what they represented at that particular time. So there’s not one period that we kind of look back on and say, ‘Ah! If we only [could do] that again.’ To be honest, we’re really just excited about the new album, Hippopotamus, and going at it with a naïve approach just like we did way back when.”

“We try to be as dispassionate as we can as far as judging what we’ve done, just to make sure that we’re not going through the motions,” adds Ron. “I mean, if we had felt that it was something that was just putting something out in order to be able to tour or that sort of thing, you know, we wouldn’t do it. And we were excited when we started writing the songs for this album because we realized that, at least for us, they felt very, very inspired. … We try to keep things very colorful, but also at the same time not write down to a young audience.” “We have to make it something that is the encapsulation of everything that we do, and is hopefully as good as something we’ve done in the past,” explains Russell, “so that someone that’s coming completely fresh to Sparks, and they hear Hippopotamus, will go, ‘Wow, who’s this new band called Sparks?’ And, ‘I really like this!’”

Sparks say their 2015 supergroup with Franz Ferdinand, FFS, “reinvigorated us to work once again doing three- and four-minute pop songs” on Hippopotamus, and over the years they’ve collaborated with everyone from Moroder, Wiedlin, and Jimmy Somerville to Faith No More. One artist they have yet to work with is the patron saint of Anglophiles, Morrissey — although that could happen one day. The iconic ex-Smiths singer has publicly declared Sparks’s 1974 masterpiece Kimono My House as one of his all-time favorite albums (it was Moz who first talked Sparks into playing that album in its entirety at the Meltdown Festival he curated 12 years ago); Sparks released the track “Lighten Up Morrissey” in 2008; and the legends came in contact again a couple months ago, albeit in a very bizarre manner.

“We have a studio in my place, and I was working, and I went outside for a brief second, and leaning against my door is an album,” Russell recalls with a chuckle. “A Morrissey LP, inscribed by Morrissey, saying, ‘Russell, you must re-record this one demo that we had done. You absolutely must do it.’ It still had the Amoeba Records pricetag on the album as well. But he chose not to stick around and give me the record; he just set it gently against the front door.” Russell wasn’t creeped out by what some might have perceived as a stalker move. “No, I took it as a nice thing. If Morrissey is [reading] this, it’s meant in the best way. But he should have said hello, but he didn’t.” Audio of this conversation is available on demand via SiriusXM. Lori Majewski is the co-host of Sirius’s “Feedback” morning show on the Volume channel. This article originally ran on Yahoo Music.