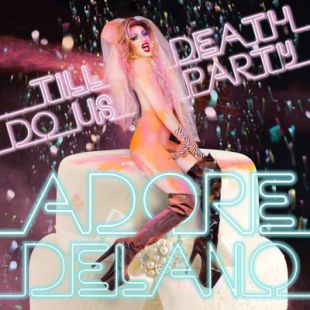 It’s been two decades since a drag queen really broke through to the pop-music mainstream: That was RuPaul, with the 1993 smash single “Supermodel (You Better Work).” But now Ru’s torch is being passed, in a way, to Adore Delano, a top three finalist on the most recent season of the hit talent show RuPaul’s Drag Race.

The best-selling album by any Drag Race contestant, Adore’s full-length debut Till Death Do Us Party recently hit No. 59 on the Billboard albums chart, and even went top 10 on Billboard’s Dance/Electronic Albums chart and iTunes’ pop chart. But of course, Adore honed her skills on an even more popular talent show, American Idol, back in Season 7— as Danny Noriega — so of course she knows how to do more than just lip-synch for her life.

Adore recently visited Yahoo Music for a sickening acoustic performance (something few other singing RuPaul’s Drag Race alums, other than Courtney Act and Jinkx Monsoon, could ever pull off), followed by one of the funniest, fiercest interviews in Reality Rocks history. So come on, all you punk-rock mermaids and polish-removers! Shanté, stay, and party along.