No Doubt’s Tony Kanal and AFI’s Davey Havok on Supergroup Dreamcar: ‘An Opportunity to Press the Reset Button’

No Doubt’s Tony Kanal, Tom Dumont, and Adrian Young did a such an excellent job keeping Dreamcar — their new electro/pop/rock supergroup with AFI frontman Davey Havok — a secret, they’re not even sure if their old friend and bandmate Gwen Stefani has listened to their entire debut album, out May 12.

“I don’t know if she’s heard it yet, but I think she’s going to really like the record,” Kanal says with a smile. “I think it’s totally up her alley.”

Kanal and Havok are sitting with Yahoo Music in an office above the Roxy, the 500-capacity Sunset Strip club where they’re about to play their fourth-ever public show. It’s also Kanal’s first Roxy gig since 1991, when No Doubt was still a fledgling Orange County ska/pop-punk band. Fans of both AFI and No Doubt are already lined up on the sidewalk outside, hours before the Roxy’s doors open, and Kanal seems as excited as they are.

“It’s been a little while since Tom, Adrian, and myself have done intimate venues like this,” the peroxide-haired bassist reflects. “It’s been 26 years since we’ve been on that [Roxy] stage — which is awesome that we’re back here and playing it. Adrian was saying earlier that when we were playing these first live shows leading up to [Dreamcar’s album release], the Roxy was where he envisioned us.”

While the future of No Doubt remains unclear — its reunion album, Push and Shove, came out in 2012 after an 11-year hiatus, and Stefani has since busied herself with solo music, motherhood, The Voice, and a new high-profile romance with Voice co-star Blake Shelton — Kanal, who dated Stefani from 1987 to 1994 and inspired much of her lyrics for No Doubt’s breakthrough album Tragic Kingdom, stresses that Dreamcar isn’t a replacement for his iconic old group.

Related: Tony Kanal Gets Nostalgic in Video Marking 30th Anniversary in No Doubt

“No, definitely not,” he states. “Of course we would never say that. No Doubt is a very specific thing that’s comprised of Tom and Adrian and myself and Gwen, and it will always be that way. This is obviously a brand-new project, a brand-new band for us.

“Tom, Adrian and myself wanted to keep playing music,” Kanal explains. “We love playing together. We wanted to continue to do so, and it wasn’t about going and finding a singer. I think that wouldn’t have done justice to what we want to create. It had to be the right person, had to kind of come onto our radar — and Davey was that person.” 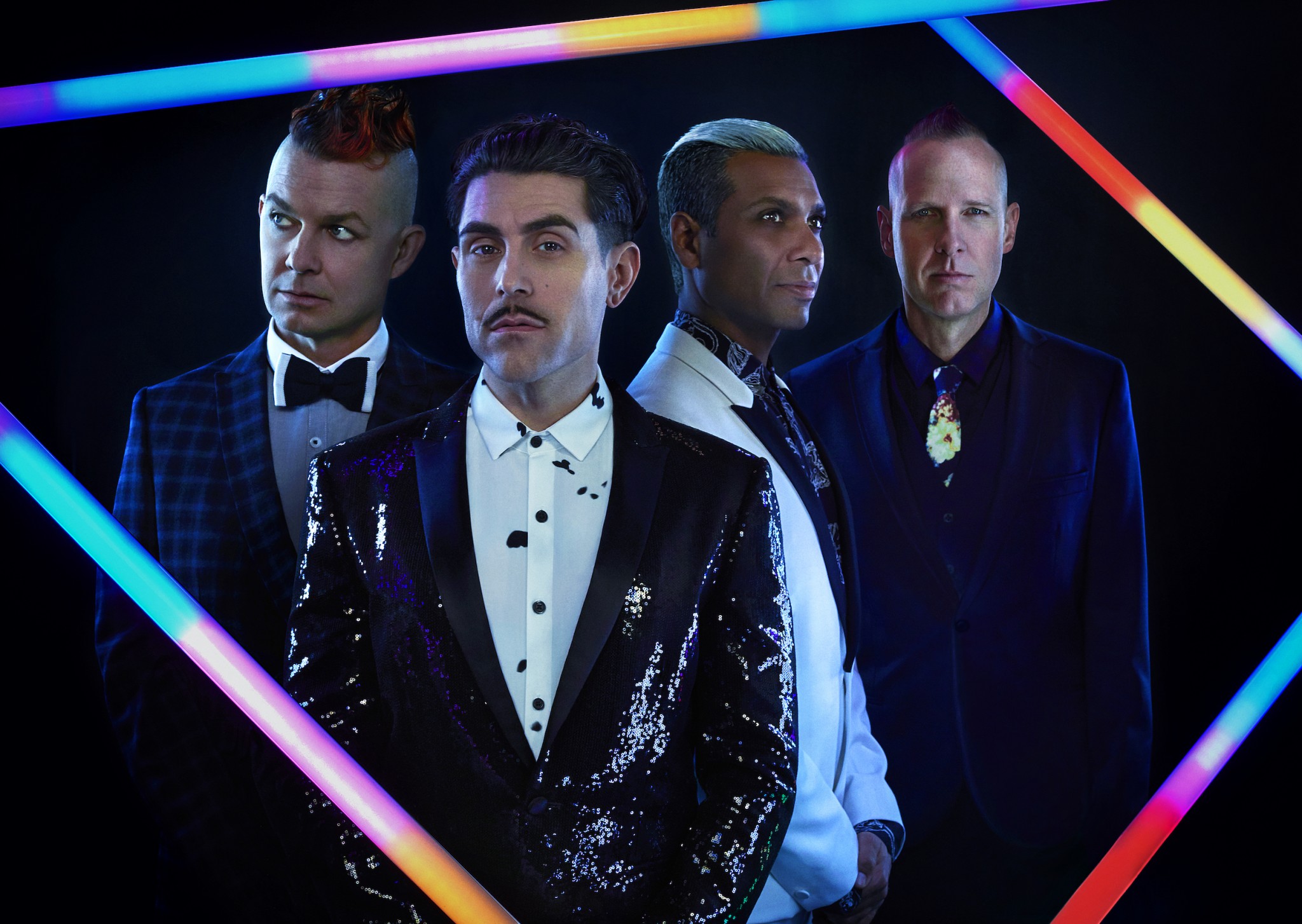 While the No Doubt guys had been musically dormant for a minute, the same could not be said for Havok, who was recording his recently released 10th full-length effort with AFI, The Blood Album, while simultaneously “working in secrecy for two years” with Dreamcar, and he’ll be touring with both Dreamcar and AFI throughout 2017. The tireless rock star’s other side-projects (with AFI’s Jade Puget) include the hardcore band XTRMST, whose debut album came out in 2014, and the electronic duo Blaqk Audio, whose third album dropped last year.

Related: AFI on Their Discography, Being Proudly Polarizing, and Why ‘Female Fans Have the Best Taste in Music’

“The one thing that people may not know about Davey is that he is extremely prolific, and he is constantly working on art… Davey’s doing so much all the time, but when he’s with you, he’s 1,000 percent committed,” Kanal gushes while Havok blushes. “He’s there in the moment. There’s nothing else that’s happening except for what’s in front of him. And it’s just this amazing, powerful force, creative force to be in the room with, to be working with, to be writing with.”

“It’s fun,” shrugs Havok modestly. “I mean, I’m so lucky to have that opportunity, to be able to express myself in different artistic formats, musically speaking — and actually beyond music — and have people care about what I do. So I’m very privileged, and since I have the opportunity, I try to take it if I can. I mean, I might be dead soon.”

Death jokes aside, Havok leads a healthy lifestyle that should afford him a long career. It was in fact a shared practice of veganism that first bonded Havok with Kanal, and eventually Kanal, Dumont, and Young “asked him on a date” to the Los Angeles vegan eatery Crossroads Kitchen. The rest was history, and the actual table where the four musicians had their first meeting about forming Dreamcar was later featured in the colorful video for their first single, “Kill for Candy.”

What makes the Dreamcar project so surprising — besides the band’s ability to keep such a superstar collaboration under wraps for so long in an era of social-media oversharing and lurking paparazzi — is that it in fact sounds almost nothing like either No Doubt or AFI. While those acts that got their start in the alt-rock ’90s, Dreamcar are pure big-’80s New Romanticism — all jangle-funk ragged-tiger guitars, slapped bass, hyperspeed synths, cheeky Blitz Kid posturing, Ant-rapping, Bow Wow Wow beats, and even a couple saxophone solos that wouldn’t be out of place on an INXS or Spandau Ballet album. Dreamcar basically sounds like a great lost Duran Duran album. However, Havok and Kanal insist that they didn’t set out to make new wave sound new all over again when they recorded their self-titled debut.

“There were no direct influences for us when we were writing,” Havok says. “It wasn’t our intention to look back. We weren’t sitting down and listening to [Adam & the Ants’] Kings of the Wild Frontier or [ABC’s] The Lexicon of Love or [Talk Talk’s] The Party’s Over. It just naturally came out of us. And as it continued to organically happen, it really fed upon itself and recreated the record that you hear.

“And it’s very natural for all of us to go in that direction as — I believe I speak for all of us — to at least some extent we were raised on that music,” Havok continues, citing My Life With the Thrill Kill Kult, the Virgin Prunes, King of “Love and Pride” fame, and Duran Duran as his own ’80s influences.

Kanal adds: “Obviously the Cure [was an influence]. Obviously Depeche Mode. For me, Prince, not in that same world, but was the biggest for me, and the most influential for me in so many weird, different ways. There’s so many different things, but like Davey said, those points of reference only came later. They were never discussed in the moment or in the creative process. This was just us being free to create with no expectations, with nobody else knowing that we were even working on music. And that’s a beautiful place to be. You don’t get that opportunity often to press the reset button, get in a studio, and just be free and creative. I think that’s such a special thing to happen.”

Just as it remains to be seen if No Doubt will record more music in the future, Kanal isn’t yet sure if Dreamcar will be a long-term project . But for now, he and Havok are enjoying the Dreamcar ride.

Related: Gwen Stefani: ‘I’m in a Real Spiritual Phase in My Life’

“I think if there’s one thing that the history of No Doubt has afforded us, it’s our opportunity to go and do different creative things, and I think we would be remiss not to explore different avenues. This is a really great place for us to be, and I think we’ve earned it. We’ve been together as a band for 30 years, so you don’t want to do the same thing over and over,” asserts Kanal. “For us, it was very much about trying something new, and I’m so glad we did, because I’m so proud of this Dreamcar record. I always say this: I don’t listen to stuff I’ve worked on when I’m driving in the car. And this is one of the rare exceptions. I’ll get in the car, and I’ll listen to our record, because I really, really love the way it turned out.”