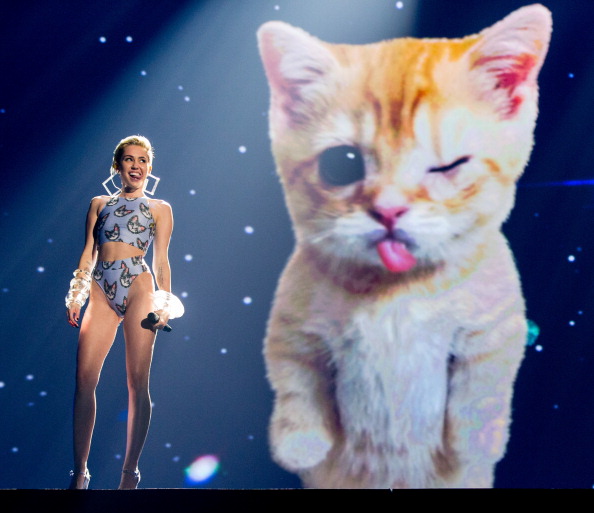 When it comes to the American Music Awards, let’s face it: It’s all about the performances. And this year’s AMAs were no exception. But will anyone be talking about any of the performances at this Sunday’s AMAs that weren’t Miley Cyrus dueting with a crying, creepy robot-cat? Probably not…but here are the top five performances from this year’s cat-tastic telecast:

1. Miley Cyrus - The only duet that received more attention at this year’s American Music Awards than Lady Gaga and R. Kelly’s (more about them in a bit) was Miley, in a kitty-printed bikini, singing “Wrecking Ball”…with a lip-synching, weeping, animatronic space-cat. If there’s anything bigger on the Internets than Miley Cyrus, it’s cats — so, basically, the Web exploded during this performance. The tweets, memes, and GIFs came fast, furious, and furry. And that extremely GIFable cat literally got Miley’s tongue at the very end of the song. Meow!

2. Lady Gaga & R. Kelly - If there was ever a strong case to be made for R. Kelly shooting about 50 more chapters of “Trapped in the Closet” starring Gaga, it would be their wonderfully wackadoodle performance at the 2013 AMAs. Their recent SNL performance of ARTPOP‘s best track, “Do What U Want,” was just a basic disco twerkout, but their AMAs duet had a whole (seemingly JFK/Marilyn, Clinton/Lewinsky-inspired) plot about President Kelly and his torrid affair with a leotarded secretary. It was all very awesome, further proof that Gaga can do whatever she wants.

3. Ariana Grande - How refreshing! An AMAs performer who didn’t have to rely on a backing track, yards of exposed skin, or any gimmicky staging to make an impression. This mega-talented Favorite New Artist-winner simply sang — and kept it classy — and she managed to upstage most of the night’s pop tarts in the process.

4. Justin Timberlake - Yep, this is what true talent looks like, people. Those impressionable One Direction boys (whose “Story Of MY Life” AMAs performance was unexpectedly impressive, actually) should check out this tour de force by the ex-boy band heartthrob with “The Tennessee Kids,” and dream that they can have a career like JT’s in 10 years.

5. Macklemore & Ryan Lewis - The energy in the room elevated so high the ceiling couldn’t hold it, when these AMAs favorites hit the stage for “Can’t Hold Us.” Macklemore can always be counted on for a rousing performance, and he definitely didn’t disappoint Sunday.

Miley Cyrus & Wayne Coyne Come In Like A Wrecking Ball At L.A. Show