Miley Cyrus & Wayne Coyne Come In Like A Wrecking Ball At L.A. Show 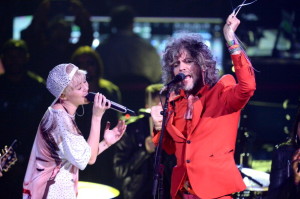 When Miley Cyrus kissed Katy Perry (and liked it) at her Staples Center show this past Saturday, the Interweb basically exploded. But in my opinion, much more exciting than that of locking-of-lips was that evening’s totally bizarre surprise appearance by the Flaming Lips.

Yes, that’s right. Miley Cyrus and Wayne Coyne. Together. On the same stage. That happened. And it was kind of awesome.

Midway through the show, the Lips’ Wayne Coyne and Steven Drozd joined Miley on her acoustic satellite stage — Wayne wearing a Santa-red suit, trailing a Mylar helium balloon that spelled out “F*** YEAH” in puffy silver letters, and seeming so loopy that Miley actually asked him if he was drunk. (He probably was.) Miley explained to the somewhat bewildered audience, “These guys have inspired me to always be myself,” admitting she was “so f***ing scared” to perform with her heroes.

While Miley and Wayne’s duet of the title track off the Lips’ landmark 2002 album Yoshimi Battles The Pink Robots was far from perfect — Wayne sheepishly admitted he’d “f***ed up” his own lyrics, despite Miley’s attempts to help him through the number — that was quite all right, as Miley merely suggested that they perform the entire five-minute song all over again. “It’s really an honor to sing with you tonight,” Wayne told Miley, who bowed reverently in turn.

This wasn’t the first time that Miley and Wayne had expressed their unlikely affection for each other. Wayne sang Miley’s praises in a December 2013 Rolling Stone interview, and last month, Miley tweeted birthday wishes to Wayne, calling him one of my favorite artists OF alllllll time.”

10 Years Later, the Flaming Lips’ ‘Christmas on Mars’ Is Still the Weirdest Holiday Movie Ever

Wayne Coyne on the Flaming Lips Playing ‘90210’s’ Peach Pit, Working With Miley Cyrus, and Writing One of the Greatest Funeral Songs of All Time