Michael Bublé’s seventh musical special, simply titled bublé!, airs on NBC March 20, and it’s being billed as the crooner’s most intimate and personal TV production yet. Inspired by the old-time television specials of Bublé’s idols (Frank Sinatra, Dean Martin, Bobby Darrin), it offers a rare glimpse into his childhood spent listening to the Great American Songbook with his grandfather, with archival home-movie footage included alongside his lovely performances with a 36-piece orchestra. bublé!  also opens with a brief look at his current family life, as he leaves home for the studio and tell his wife, singer-actress Luisana Lopilato, and their three young children, “I love you guys.”

The mood of bublé! is joyful, but three years ago, the singer and his family went through an unthinkably dark period when oldest child Noah, then age 3, was diagnosed with a rare form of liver cancer called hepatoblastoma. Contrary to a widely recirculated erroneous report in Britain’s Daily Mail, Bublé clarifies to Yahoo Entertainment that he did not decide to permanently retire from music at that time, but he did take an open-ended hiatus to focus on what mattered most: his son’s cancer battle. Thankfully, Noah recovered and is now doing well, and Bublé, who returned to music and recently released his 10th studio album, Love, is frank when asked how the entire traumatic experience made him rethink his life, career, and work/life balance.

“There was no balance,” says Bublé. “People have asked me, ‘What made you come back?’ And this is just the truth: My son was cured. It’s as simple as that. And I didn’t know what was going to happen. Obviously, it’s still scary, and it was even more scary, but I had never fallen out of love with music; I just thought, ‘How could I do this with a broken heart?’ It wasn’t like there was some kind of conscious decision. I didn’t have a choice. But when they told us he was OK — I don’t know how to understate how much the perspective of myself and my life changed in every way. When you go through something that hard and that terrible, if you can get through it, then everything seems quite easy. Now I find joy in the smallest places. Because my kids are healthy, that allows me to really be grateful about everything, the small things. Life is short, you know? And that’s it. That’s how I choose to live my life now. Everything is different.”

While Bublé jokes, “If you asked my kids their favorite songs, I don’t think it would be one of my songs; I think it would be ‘Despacito,’” he and Lopilato have imparted their love of music to them, just as Bublé’s grandfather did for him. (“I have a new house and I built a stage for them, and they’ve got a microphone and guitar. They do piano lessons and they love music. They have a natural affinity for it,” Bublé says proudly.) And surely thousands of families will draw inspiration from his family’s brave story.

Below, Bublé gets candid talking about the support he has received from his fans and the media, and why one song that he chose to perform on bublé! now means so much to him.

Yahoo Entertainment: Is there any song in your repertoire — an original of yours, or a standard that that you cover — that has taken on new meaning for you in light of what your family has been through in recent years?
Michael Bublé: Yes. It’s not a song I do in concert, but I do it [on the bublé! TV special]: “A Song for You” [by Donny Hathaway]. I think the greatest power in music is that we’re allowed to interpret it. I talk about this a lot, and I talk about it at my shows, because I promised myself I would: When this happened to us, my wife and I were able to step aside from our work to go and take care of our family. And we were surrounded by so many families going through incredibly difficult things, and those families couldn’t afford to do that. And the only reason that I could afford to actually step away from work was because of the [fans]. There’s no way for me truly to express my deepest gratitude towards them. And I don’t know how else to say it; it’s overwhelming to me. I think it’ll be emotional for me for the rest of my life, to stand up in front of all of those strangers in the dark. 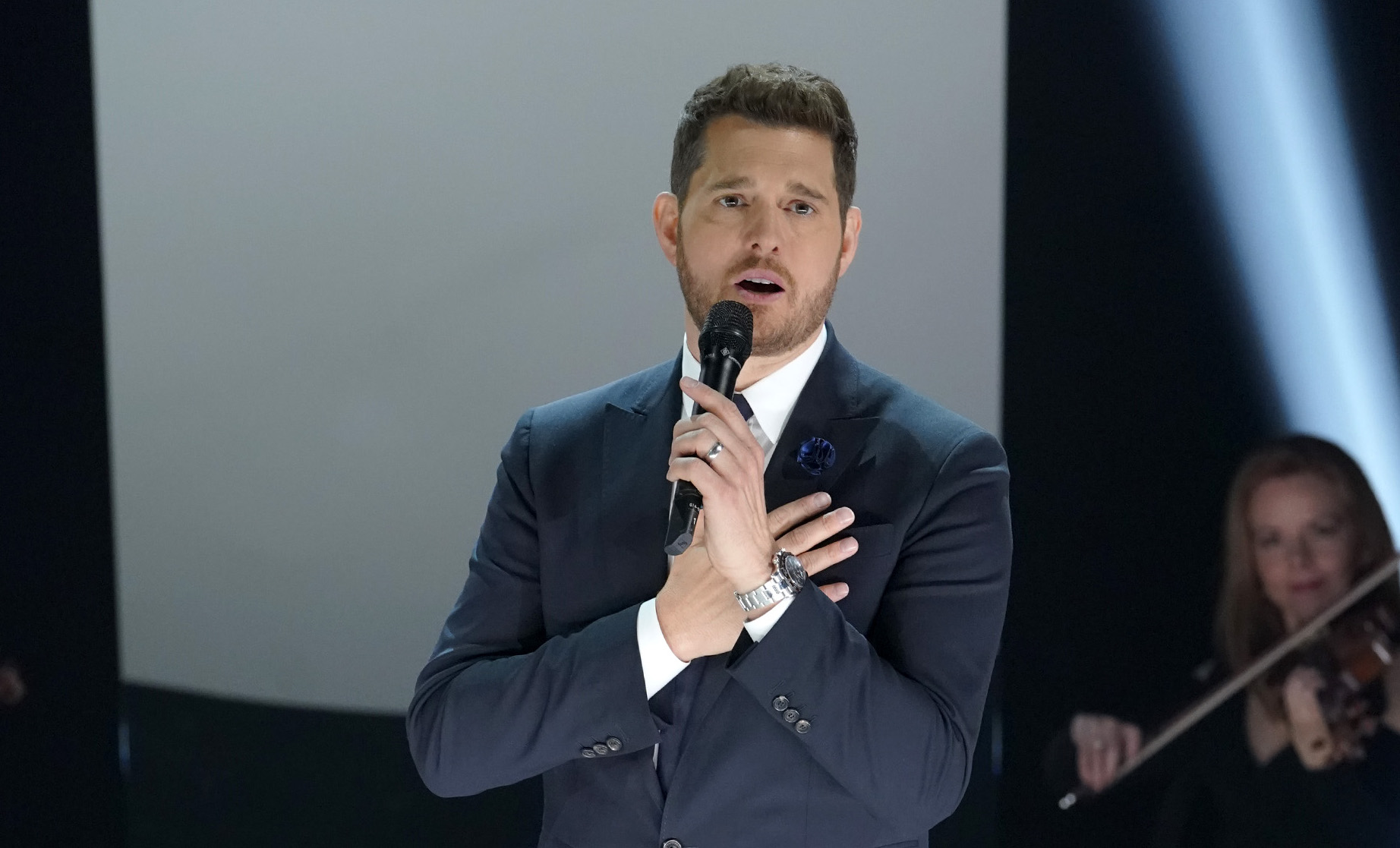 So that song, “A Song for You,” is really for your fans now. They have truly been there for you.
Well, they’re not “fans.” I keep saying this over and over again: I don’t think “fan” is a very nice word. There’s a negative connotation. I think it’s short for “fanatical,” and those people that are sitting out there are surely not fanatical. They’re my family. They’re my equals. They’re my saviors, in many ways. Their prayers got us through nights that were impossible. And so the fact that I get to go out and show them my gratitude and my love means a lot to me.

There are a lot of people out there who have been through what your family went through. Do you have any stories of how any of them have reached out to you, or bonded with you, thanked you?
Every single day. There’s no one story. Every single day that I go to the store, every single day that I show up at a new arena, there are people that share touching stories. Honestly, I took the kids to Disney yesterday and we were on the submarine ride. And a woman was sitting next to us, and she was a grandma. She was with her daughter and her granddaughter, and she looked at me and she put her hand on my knee and she said, “I just am so happy for you. You don’t know how much I prayed for you. I prayed for you every day.” And I just looked at her and said, “I love you. You’ll never know how much that means to me — how much it meant to us.”

That’s amazing.
Well, these are just real people, you know? We all go through hard times, and I just think that sort of gave me a real faith in humanity. It’s not just about what we were going through. It was about what we could see happening in the world, you know? There’s a lot of issues. A lot of sadness. A lot of suffering. A lot of negative stuff. And I think for me, coming back to [music], I felt like there was a lot of power that a human being has, and that with my music, maybe I could bring some kind of peace to people — a sort of inspiration, or help somebody get through a tough moment, even if it’s as small as helping somebody just get away for a couple hours. I think that is important. And so I felt like that was kind of something that I could do, to do my part.

Didn’t the doctor who saved your son’s life attend one of your recent concerts? That must have been a very special moment.
Oh, I was so excited that he was there. It meant a lot to me. And it was obviously really emotional for me. It was a magical show, and what’s funny is he told me yesterday there were so many people there, and it was packed. He was going to call Uber [after the concert], but for whatever reason, Uber didn’t recognize the arena. They weren’t coming to get him. He was like, “S***, I’m gonna get frickin’ stuck here!” And he told me that all of a sudden, these people stopped and said, “Are you the doctor of Noah?” And he said, “Yeah.” And they said, “Listen, what are you doing?” He said, “I’m waiting for the Uber.” And they said, “No, no, no. The least we can do is drive you!” And they put him in the car and took him back to the hotel.

Aww, that completely illustrates what you were saying earlier about your fans being more than just fans! I can tell you’re getting emotional talking about this.

It’s tough for me, you know? It’s weird. I used to be so stoic. I had so much control. I don’t think I’d ever lost control of my emotions. And now I have no control. I have none! And it’s funny, because people say, “Well, that’s not a bad thing.” But it’s a little scary when you’ve had that control all your life and then all of a sudden, you don’t. It’s a weird, unnerving kind of thing.

How do you channel that new vulnerability into your art, into your music, your performances?
I promised myself, if I had ever got the chance to do this again, that I would just be real. That’s the truth. Over and over again, I said, “Michael, just be real. Just be yourself. And it’s not your business what people think of you. Just be kind. Just be yourself.” And it sounds weird, because sometimes it’s hard to be yourself — especially if you’re worried about what other people think of you, or what critics think, or the internet thinks, or whatever. … The Internet, you know, it’s f***ed.

You’re not very active on social media.
No, I don’t have social media. I mean, I guess I do, but [other people] run it for me. … I guess ignorance is bliss in some ways. One of those kind of epiphanies that I had the day we found out about Noah was that [social media] didn’t feel good to me. It didn’t feel right. What I wanted to do, really, was just get rid of things that were ego-driven and self-indulgent. I really did. And it got very simple for me after that.

The actual media, though — the press —has rallied around you and your family.
You know, can I be honest? Part of this f***ing faith in humanity that I have … it didn’t just come from people and the public. It came from people like you. Because I saw so much tact and control. I didn’t expect to see it. I didn’t expect that so many journalists would be so human. And that, almost as much as anything, gave me this sense of wellness. There was a line that even the worst [people on the internet] didn’t cross. … It meant a lot to us, to my wife and I. The media was so great to us.

Let’s end the interview on a lighter note. You have this special on NBC, your seventh, and you’re good friends with Blake Shelton and have appeared as an adviser on NBC’s The Voice with him. Would you ever consider being a full-time coach on The Voice?
Well, people ask me about that a lot, and they’ve asked me about doing movies and stuff. I’ve had those opportunities, but the truth is, I get to go out internationally and sing in front of 45 or 50 countries. I get to show up to their backyards and be tangible. I get to dance and sing and laugh and cry with them. And I just feel that I don’t want to give that up for being in one place for that long.

The Cure at 40: How Robert Smith Became an Enduring, Unlikely Rock Star