Meet the Scene-Stealing Drag Queens of ‘A Star Is Born’ 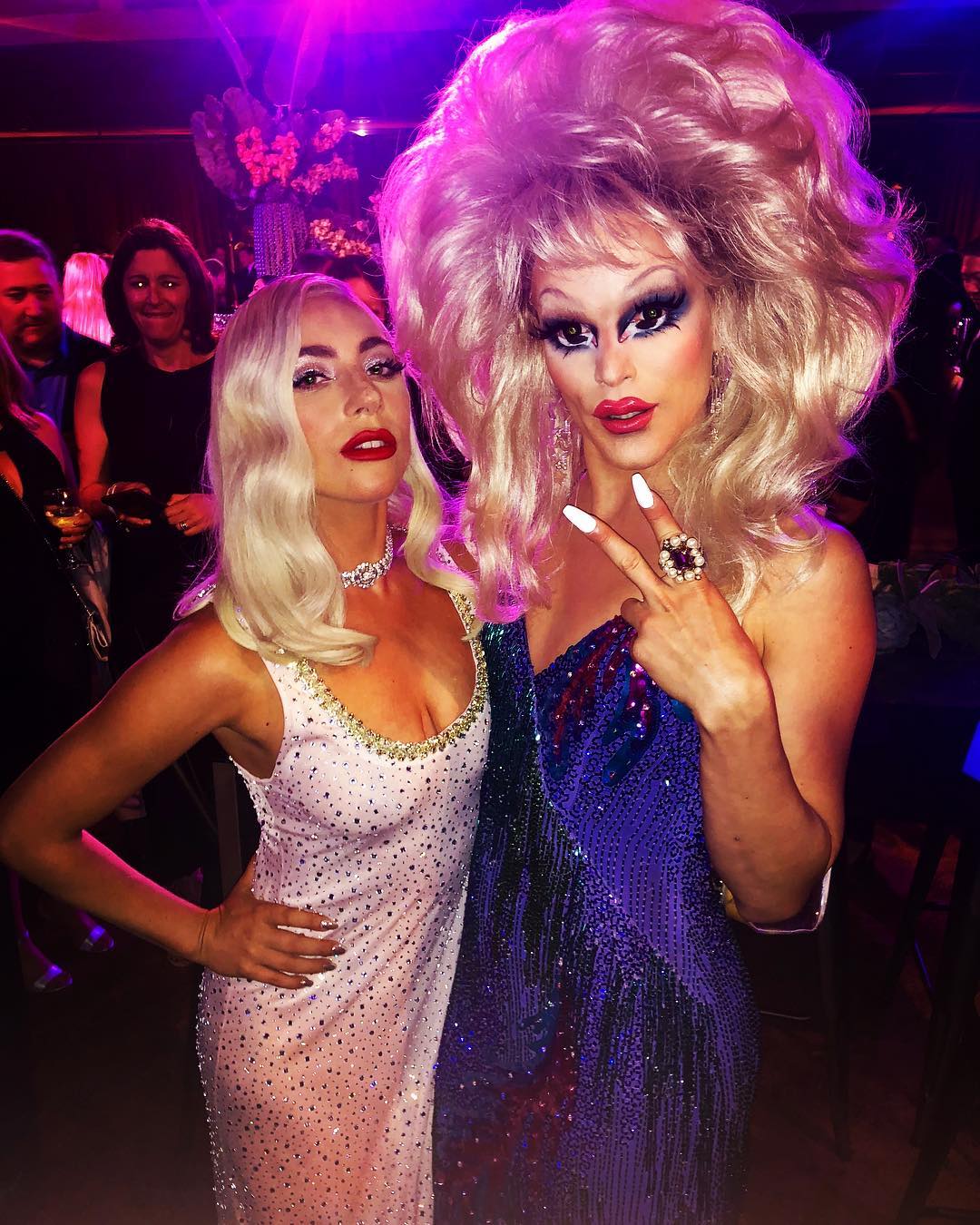 Lady Gaga and Willam at the ‘A Star Is Born’ premiere in Los Angeles (Photo: Instagram)

Bradley Cooper and Lady Gaga may be generating early Oscar buzz for A Star Is Born — but two hilarious drag queens, Shangela Laquifa Wadley (real name: D.J. Pierce) and Willam (Willam Belli), stand out so much in the movie’s meet-cute drag bar scene that they nearly upstage the lead actors.

Longtime viewers of the Emmy-winning RuPaul’s Drag Race may recognize ex-contestants (and regularly working actors) Shangela and Willam, but appearing in one of the most hyped and critically praised major motion pictures of 2018 is taking these queens’ careers to an entirely new, mainstream level. And it turns out that Gaga, who was a guest judge on Drag Race last year, campaigned to have the fateful meeting of the film’s characters, unknown singer-songwriter Ally and aging rock star Jackson Maine, take place in the New York drag club where Ally moonlights as a torch singer.

“Gaga f***ing loves drag queens,” Willam tells Yahoo Entertainment, recalling meeting Gaga in her early West Hollywood clubbing days. “I remember literally getting boys down [off the stage] so she could perform — ‘Get the go-go boys down, so Gaga can get up!’ — and thinking, ‘Oh my God, she’s actually really good. She’s not what we normally get in here.’” Adds Shangela: “I mean this in the most highest regard and respect way… she’s kind of like a drag queen with us. She’s an entertainer. She understands that world.”

Gaga even handpicked Shangela for the film. “And what a lovely hand it is!” jokes Shangela. And first, however, Shangela — who had appeared in Gaga’s 2013 “Applause” lyric video alongside several Drag Race alumni — assumed she was all wrong for the A Star Is Born part. “Originally, one of the drag queen roles that was out there was for a drag queen Marilyn Monroe impersonator. Honey, I don’t care how much time I stay out of the sun, I ain’t looking like Marilyn Monroe! … So I didn’t go in for the audition,” Shangela laughs.

However, Gaga was persistent. “A little time passed, and I got an email from Bobby Campbell, who is Lady Gaga’s manager. He was like, ‘LG — that’s Lady Gaga — has heard that you didn’t come in for the audition, and she really wants you to come in for this audition. She thinks this would be a good role for you, and you should go in.’ Now, if LG asks you to go somewhere, I was like, ‘Honey, where is my blond wig and my white dress?’ I went, I put my little beauty mark Marilyn mole on, and I went in there and I sang, ‘I Want to Be Loved by You’ for the audition. Afterward, they told me I didn’t get the role, but the casting told me they liked the audition so much that they wanted to offer me a different role that actually had dialogue and the character was more developed.” Shangela was eventually hired to play Ally’s play drag mother and the bar’s owner/emcee.

Willam also almost didn’t make the cut. “Regular Hollywood story: My manager told me I had an audition. I said I was out of town. I flew home early to do it. Went from the airport, got in drag to the audition, and I didn’t get that part,” she says. “And then, there was another part they released, and I didn’t get that part, and then they called back and said, ‘Hey, we have a part for you.’ And I said, ‘Cool, can I see a script?’ They said, ‘Absolutely not. Just know her name’s Emerald, and she has lines.’ And I was like, ‘Cool.’ And then, once I got there, all the magic happened.”

The magic happened because Cooper, who also directed A Star Is Born and actually called Willam “gold” during a recent press conference, encouraged the two hilarious queens to showcase their comedic chops (as previously seen during various Drag Race mini- and maxi-challenges) on the movie’s set. “He let us be ourselves, and there was definitely some improv and a lot of my jokes that he ended up using. It’s a huge compliment,” says Willam. “My favorite moment was when I did a rehearsal for one of the scenes and I could hear them laughing from video village. Gaga came over after and she’s like, ‘That was great. Bradley likes these two jokes, I would just flip them around and try it that way.’ And that’s what ended up being in the movie. It was the best set I’ve ever been on in my life — and I’ve been [acting] since I was 16 years old.”

Shangela was also thrilled that Cooper gave her the freedom to improvise. “He was like, ‘I know what I want, but I want you to give me also what you’re going to bring. And if I need to pull you back, I will.’ I thought that was really awesome of him as a director to not be like, ‘You have to stick to these lines. You get to also expand if you want.’”

Willam was pleased with how Cooper got most of the details of the drag world right, too: “Other than some things in the dressing room! We were like, ‘OK, we would never use that.’ Me and Shangela were looking at this one boo-boo little wig, and we’re like, ‘Gurl, who’s going to wear that? Why is that even in the dressing room?’ And they had these nice real-girl makeup products that were gorgeous Almay colors, and we’re like, ‘Where are we going to use this?’” she laughs. “But other than that, yes, it was 100 percent accurate. It really honestly felt like a drag dressing room, because it was cluttered. There was girls’ s*** everywhere. If you put drag queens in a drag dressing room, they’re just going to keep putting on makeup, and that’s all I did.”

Willam also appreciated that the incorporation of drag in the film didn’t seem like a novelty, some ploy for cheap laughs: “I actually feel like I was part of the cast; I wasn’t just like some drag queen they brought on for a joke” — and that it didn’t seem out of place with the rest of the plot. “This is a huge visibility thing for drag, but it’s not like the drag is pushed down anyone’s throat and it’s like, ‘You need to accept it!’ It’s just part of the character’s life, and drag is cool now, so who wouldn’t want to be involved with it?”

Willam even says the drag subplot humanized Cooper’s character and made the movie’s love story more believable. (In one romantic and adorable scene, Gaga’s Ally even puts false eyelashes and skinny Edith Piaf eyebrows on Jackson.)  “It’s great, because honestly, I think the fact that he’s in a drag bar, if you put that kind of character on paper and said, ‘Would this character be cool with drag queens and stuff?’ you might just think, ‘Eh, probably not.’ You know, grizzled old rocker,” Willam explains. “But the fact that this man in the movie, Jackson Maine, is cool and empathetic and interested, and doesn’t just go, ‘I don’t know what the f*** that is’ about the drag queens, really informs the Ally character about him. This is a good man, and he’s worth talking to. He’s cool with her friends, who are these different people who aren’t the mainstream performers of society. I think him actually being cool with us kind of really ingratiates Ally to him and makes him human. Sure, they show him drinking and taking a handful of Vicodin and stuff, but this is something like, ‘Oh, cool. He’s willing to keep an open mind.’”

Shangela says the drag bar setting was also key to Ally’s believable story arc as a struggling, insecure singer-songwriter. “I also wanted to make sure that the character relationship between myself and Lady Gaga, the character of Ally, felt authentic and real. … Ally works in the drag bar and she’s a straight girl, but she comes to our show because she doesn’t feel always that she fits in on the outside world, but here, this is her home.”

Landing this plum role is vindication of sorts for Shangela, who, many angry fans feel, was totally robbed of the RuPaul’s Drag Race All-Stars 3 title earlier this year, and Willam, who was mysteriously kicked off Season 4. (Willam tells Yahoo Entertainment it’s highly unlikely she’ll ever compete on a future All-Stars season, despite being a fan favorite. Last year, she protested that former Drag Race makeup artist Mathu Andersen’s name had been omitted from the Emmys ballot — ironically, for the “Oh My Gaga!” episode starring Lady Gaga herself — and, she says, burned another bridge with the show as a result.)

Obviously, Shangela and Willam have gone on to bigger things. And while both queens have long résumés that include book deals, albums, talk shows, sold-out comedy revues, viral parody videos, podcasts, and roles on shows like Nip/Tuck, CSI, Glee, and Bones, they consider A Star Is Born to be a career highlight.

“If I die tomorrow I could die happy, because this feels like possibly the biggest thing I’ll ever do in my career, and I’m fine with that,” says Willam. “I get to be in a movie with Gaga. Everything after this is f***ing icing and gravy. I’m cool.”

“I feel incredibly grateful,” says Shangela. “This is something I’ve always dreamed of in my life. I came in the door of [RuPaul’s Drag Race] Season 2 with a dream and hardly any makeup on, and now to be here in this moment in this film, and to just be living the dream that I’ve always had — which was just to work as an entertainer no matter how — I did that.”

@itsshangela is one of the few people i know who works harder than me. Congrats on the gig, girl. We been sitting on this pic and a @starisbornmovie hoping we didn’t end up on the cutting room floor for 18 months now since we filmed. #jacksontitties

The queens even got to attend the film’s star-studded Los Angeles premiere in their most gagworthy eleganza. “I was so thankful to be there and to be able to walk the red carpet and see Gaga in all her fabulous Alexander McQueen-ness,” Shangela gushes. “I got to take [my mom] to the after-party, where Gaga actually showed up as well. I got to introduce my mom to Lady Gaga. I was like, ‘Lady Gaga, do you mind saying hi to my mom?’ … And she gave her a big old hug. She was like, ‘You must be so proud of him. I’m so proud of him.’ Now my mama tells everybody, ‘Lady Gaga loves my son! Lady Gaga loves him!’” 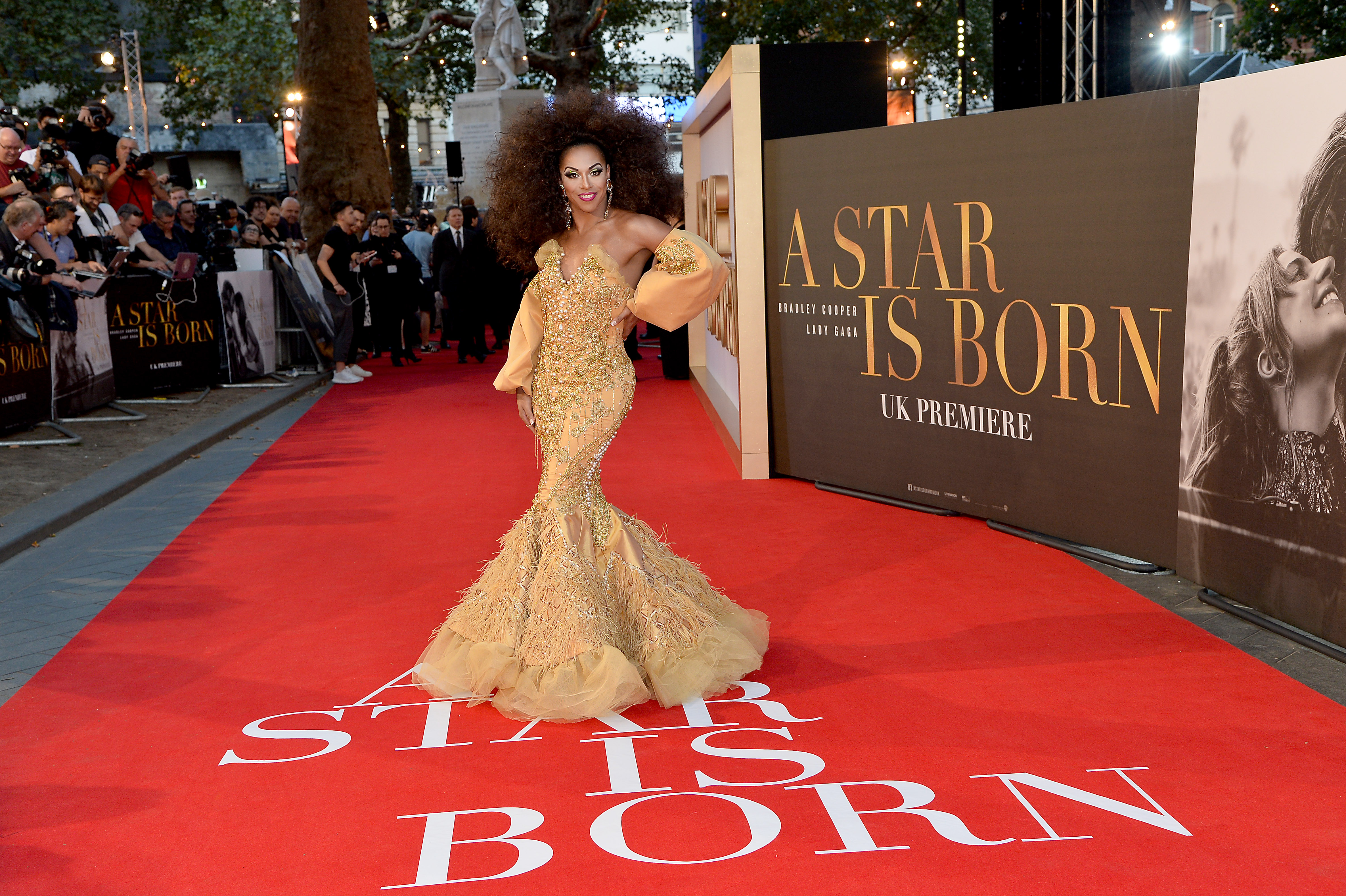 Shangela at the premiere of A Star Is Born (Photo: Jeff Spicer/Getty Images for Warner Bros)

“The best night of my life before this was this moment at Burning Man, the first time I went there. And the best night of my life has now been replaced with this [premiere] night,” says Willam. “I was like, ‘Bitch, I’m wearing Bob Mackie, old-school, and I am jacking up my hair to heaven.’” As for what Willam might wear if she gets invited to the Oscars next year, she chuckles, “I’m just taking it one day at a time. Actually, one night at a time. I’m not usually up during the day. I’m a drag queen!”