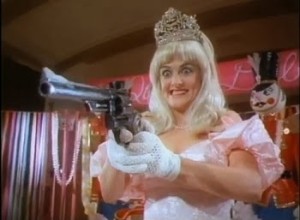 This week, I was cruising through the Valley listening to the always endlessly, randomly entertaining Jack FM, when “The Homecoming Queen’s Got A Gun” came on. The 1984 novelty song, by early-MTV comedienne Julie Brown (not to be confused with the Club MTV Lycra queen Downtown Julie Brown, who was always chirping “wubba wubba wubba!” and was not nearly as awesome), was Julie’s finest work this side of the Earth Girls Are Easy classic “I’m A Blonde” — so I delightedly cranked up my croaky Scion stereo, pretended I was listening to Dr. Demento’s radio show back in the day, and prepared myself for some nostalgic laffs.

Er, yeah. I guess in light of the real-life shooting sprees (Columbine, Newtown, Gabrielle Giffords) that’ve taken place in the three decades since Julie released this kitschy hit, lyrics like “Debi’s smiling and waving her gun/Picking off cheerleaders one by one/Buffy’s pompom just blew to bits/Mitzie’s head just did the splits,” “An hour later the cops arrived/By then the entire glee club had died,” and “Debi’s really having a blast/She’s wasting half of the class” just aren’t as chuckleworthy as they were back when Julie wrote them as a parody of ’50s/’60s teen-tragedy epics like “Leader Of The Pack” and “Last Kiss.” I guess the ’50s and ’60s — and the ’80s — were simply more innocent eras. Sigh.

I really do wonder how the musical based on this song went over with L.A. audiences last year. But more importantly…I STILL wonder who Johnny was.

#NoMakeupSunday: When KISS Bared Their faces on MTV, 35 Years Ago