Jagger, Richards Talk ‘Some Girls’ 40th Anniversary: ‘Punk Rock Was a Kick Up Our Ass’ 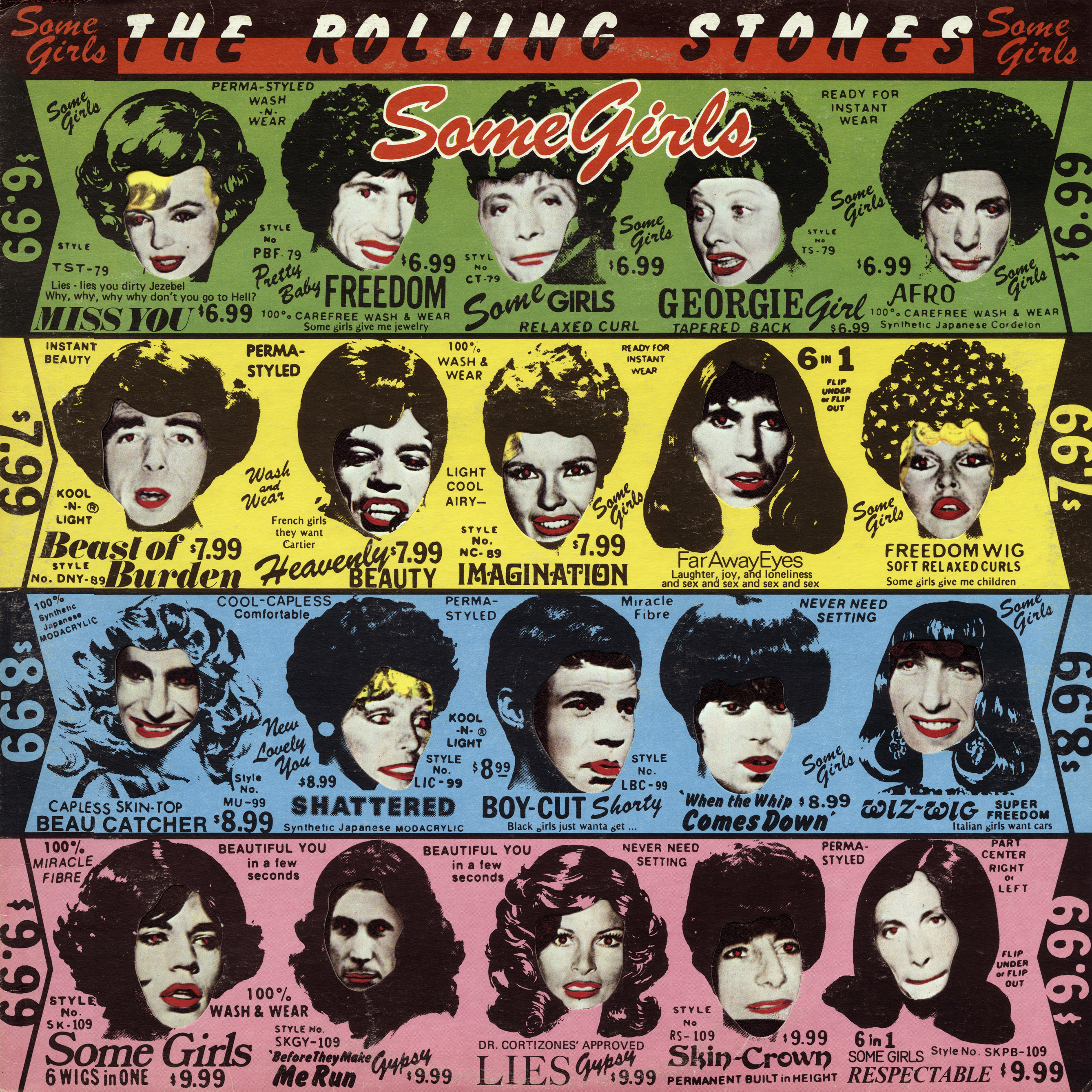 Vinyl record sleeve of “Some Girls” by the Rolling Stones in 1978. (Photo: Apic/Getty Images)

>Few Rolling Stones albums have held up as well as their genre-hopping, expectations-flouting masterwork Some Girls. (Seriously, is there anything as deliciously and decadently sleazy-sounding as Mick totally going off at the end of “Shattered,” or Keef slurring his way through his bloozy rebel anthem “Before They Make Me Run”?) The attitudinal album — which came out an incredible 40 years ago, on June 9, 1978 — still sounds as gritty and urban and sexy as ever, but it’s also a fascinating document of a turbulent and transitional musical era, when punk and disco were taking over and threatening to render all classic rock bands of the 1960s obsolete. So the Stones, of course, reacted to such changing times by unleashing one of their hookiest, cockiest, and downright Stonesiest albums ever.

“Without a doubt, the punks certainly made us sort of look around and say, ‘Oh, my God, we’ve been around for 10 years already!’” Stones guitarist Keith Richards told Yahoo Entertainment at the time of the album’s 2011 deluxe reissue. “The energy of the punk thing affected Some Girls in many ways. The only trouble with the punks is none of them could really play! I loved the attitude, y’know, but where’s the music? And that was their letdown. But otherwise, it was a matter of attitude more than anything else. It was about energy, and it was a kick up our ass.”

“I think it was pretty conscious of living in the day,” Richards’s Glimmer Twins counterpart, frontman Mick Jagger, mused. “This was a very interesting time in music in New York, where I was living a lot at the time. You had sort of a return to very basic rock music — you know, the Sex Pistols and all that — but you also had the beginning of hip-hop, the beginning of rap, and you had lots and lots of kinds of dance music, very different kinds of dance music. The early dance music was quite innovative in lots of ways. So you had a lot of genres, and these were cross-pollinating everything. I think in some ways this album reflects some of that time, and I think that’s what makes it an interesting album.”

“And the disco thing, I don’t know, that was just what was going on in clubs, and you sort of picked up a beat. And we just decided to do a disco song [the polarizing 'Miss You'],’” Richards added. “At the time, it wasn’t necessarily ‘disco music’ to us; it was just another rhythm-and-blues beat. No doubt hanging around in bars and clubs a lot had something to do with it.”

Rock purists at the time were horrified that the Stones had supposedly sold out and “gone disco” — a laughable nonscandal now, considering how many current rock acts (Muse, Beck, Franz Ferdinand, the Killers, and pretty much any band that’s ever released a remix) draw from dance music now. Recalling the backlash, Richards remarked in his dry and delectable drawl: “Purists of any kind really piss me off. Of course, there are some who are gonna think this or that. But that’s their privilege; it’s cool with me. Not everyone’s gonna get it the first time.”

“Yeah, I mean, now it’s ridiculous to even think about,” Jagger marveled. “It’s a bit like Bob Dylan going electric, isn’t it? It’s ridiculous to even think that people made a fuss about it. Now you look back and think, ‘How stupid was that?’ There were a lot of people that were very narrow-minded about it. To me, I wasn’t brought up on rock music so much as blues and soul music, and a lot of that music was dance music. It was specifically made to dance to. You know, I like dancing, so as far as I’m concerned, all sorts of fast songs for me were all made to dance to. So obviously, I’d be very interested in making dance music. And that particular groove was the groove of the moment. You don’t really play the grooves of yesteryear when you make records; you play the grooves of now. And that sort of beat was the thing that was going around at the time. For some people, it was a very big hit, but not everyone liked it.”

Interestingly, however, many of the unreleased tracks on 2011′s Some Girls boxed set traffic not in disco or punk but in the sort of bluesy, boozy country-stomp of the famous Some Girls cut “Faraway Eyes.” There’s the bar-band rocker “Claudine” (“That one should have been on the original album; it’s a damn good song,” said Richards), the twangy ballad “No Spare Parts,” and covers of country classics like Hank Williams’s “You Win Again,” Freddy Cannon’s “Tallahassee Lassie,” and the Waylon Jennings/Conway Twitty standard “We Had It All” (the latter features “Before They Make Me Run”-worthy lead vocals by Richards.) Quipped Jagger of the album’s blurred genre lines: “We were doing diametrically opposed kinds of music at the time: dance music on one hand, country on the other. We were like the jack-of-all-trades here!”

No Some Girls retrospective would be complete, obviously, without a look at the album’s infamous artwork. The original die-cut cover, created by Peter Corriston, featured a parody of a vintage wig advertisement, depicting the bewigged Stones in drag alongside Hubert Kretzschmar illustrations of iconic female celebrities like Farrah Fawcett, Marilyn Monroe, Lucille Ball, Raquel Welch, and Judy Garland. But early album pressings soon became collectors’ items due to threatened legal action from these famous women and/or their estates.

“On the original album, there were old-fashioned film stars, but because we were stupid and never got permission from them, we got stopped a lot from using them,” Jagger explained. Other versions of the controversial cover art were then created — one with hand-drawn generic women, another with ’70s celebrities such as Carly Simon, Linda Ronstadt, Britt Ekland, and even President Jimmy Carter in drag (the latter of which, of course, never saw a commercial release). But the version most fans have in their record collections is probably the one with all faces removed and a “Pardon Our Appearance — Cover Under Reconstruction” banner slashed across it (“as if the cover were a Manhattan department store doing renovations,” according to liner notes author Anthony DeCurtis).

These days, Richards feels nostalgic for the bygone era when the covers for albums like Some Girls and the Stones’ functional-zippered Sticky Fingers were big-deal affairs. “The meaning of an album cover, it has a thousand uses apart from holding a record. You can roll joints on it; you can do all kinds of s*** on it. And it was a good size to look at. A CD is kinda a little small. Miniature. And with downloads, you don’t get a cover at all.” So, what will Stones fans roll their joints on now? “Tough s***, I don’t know,” Richards shrugged.

Regardless of the look or size of its packaging in 2018, Some Girls holds up, and the band is understandably still very proud of it. “It’s one of my favorite Stones albums, I think, because it’s so listenable as an album, and it gets to the heart of the matter straightaway, and there’s no mucking about, and it’s succinct,” said Jagger. “It doesn’t sprawl, it’s to the point, it’s got a lot of style, and it’s got this energy. I think it’s all around a really good album. I think it’s underrated. I don’t know where it comes in the ratings, to be honest. In my ratings, it comes very high — just don’t ask me what number.”