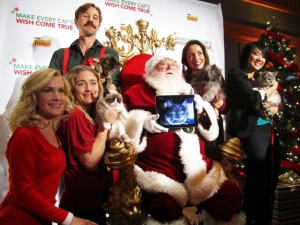 Move over, Traveling Wilburys. See you later, Velvet Revolver. The ultimate supergroup has arrived — the Traveling Catburys, if you will — and they’ve just released what is basically the “Do They Know It’s Christmas?” or “We Are the World” of feline pop: a holiday charity single called “It’s Hard to Be a Cat at Christmas.”

The allstar kitty video — which brings together Interweb celebrity pets Nala Cat, Oskar the Blind Cat, Hamilton the Hipster Cat, Colonel Meow, and the ultimate four-legged diva, Grumpy Cat — made its world premiere Tuesday afternoon at the legendary Studio A in the Capitol Records Tower in Hollywood, at a press conference led by actress Angela Kinsey, aka the crazy cat lady of “The Office.” All five cats were in attendance (well, Hamilton, being the mustachioed hipster that he is, participated via Skype), and they behaved better than most two-legged rock stars, blithely tolerating a barrage of paparazzi and selfie-shooting fans during the bizarre hour-long event.

“Traditional pop bands better watch out! This Internet cat supergroup is about to take over the charts. I look forward to their world tour,” Angela declared.

“It’s Hard to Be a Cat at Christmas” was commissioned by Friskies (who recently hired Grumpy as its official spokescat) to help less famous kitties in need across the country. For every video view at http://www.friskies.com/holiday, Friskies will donate a can of wet food to one of five different cat charities selected by Grumpy (Cat Welfare Association), Nala (Kitten Rescue), Oskar (Purrfect Pals), Hamilton, (Humane Society Silicon Valley), and the good Colonel (Seattle Persian and Himalayan Rescue). Friskies has pledged to give away up to 500,000 cans, the company’s largest one-time donation to date.

After the press conference in Capitol’s upstairs suite, Yahoo Music caught up with the star of the show, Grumpy Cat, to discuss her rock ‘n’ roll lifestyle (with Grumpy’s hard-working manager Ben Lashes, former frontman for the indie Seattle band the Lashes, hovering nearby). Does Grumpy listen to angry metal or depressing Goth music? Is she really a diva? What’s on her tour rider? Does she get along with her new bandmates? Check out the exclusive scoop, straight from the cat’s (or cat owner’s) mouth.