Nick Fradiani just won Season 14 of American Idol, and Big Machine’s Scott Borchetta is about to put him to work. But somehow Nick still found time, the day after this week’s big Season 14 finale, to swing by Yahoo Music and draw something for our wall of fame, in the last installment of our Idol Illustrated series. 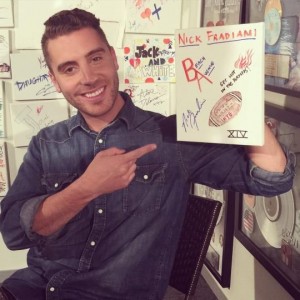 Nick also talked frankly about his bonds with Borchetta, Idol runner-up Clark Beckham, his band (America’s Got Talent alums Beach Avenue), and the former girlfriend, Yanni G, who encouraged him to try out for Idol; about what’s next for his bandmates, now that he’s a solo Idol; about being a reluctant heartthrob; and about all the times that people amusingly confused him and Clark. Yes, that really happened!

See Nick unveil his drawing here, and check out other Season 14 contestants’ original artwork in our Idol Illustrated series.