Twenty-one years ago, when Hanson released one of the earwormiest singles of the ’90s, the Jackson 5-reminiscent “MMMBop,” the song was summarily dismissed by many music snobs as a novelty hit, mere boy-band fluff. However, a new orchestral version of the perennial pop classic on String Theory — the brotherly trio’s career-retrospective double-album featuring gorgeous symphonic arrangements by Beck’s father, Oscar-winning composer/conductor David Campbell — not only puts the focus on Hanson’s impeccable popcraft and musicianship in general, but on “MMMBop’s” surprisingly dark and downright existential lyrics, which come into sharp relief when backed by Campbell’s lush strings.

“You have so many relationships in this life/Only one or two will last/You go through all the pain and strife/Then you turn your back and they’re gone so fast,” the Hansons bittersweetly harmonize. “So hold on the ones who really care/In the end they’ll be the only ones there/And when you get old and start losing your hair/Can you tell me who will still care?”

Sure, they’re all married fathers in their mid-30s now, but Isaac, Taylor, and Zac Hanson were only 16, 14, and 11, respectively, at the time of “MMMBop’s” release — and they were even younger when they wrote it. (Hanson have been a band for more than 25 years, and they actually made three local records before they ever landed a major-label deal.) Why on earth were they worried about losing their loved ones — and their hair! — when they were barely preteens?

“We had already experienced some trauma,” Zac, age 33, tells Yahoo Entertainment, referring to the many childhood sacrifices he and his older brothers made when they decided to chase their professional dreams. “We were seeing that we were outcasts.”

“We were traumatized. … We knew we were weird, and we knew we were making choices that were about the long tail,” adds 37-year-old Isaac — noting that “Weird,” another early composition that eventually appeared on Hanson’s breakthrough album, Middle of Nowhere, was also inspired by the brothers’ boyhood showbiz struggles.

“We were already having to make these decisions that were based on a love of music, a love of this craft, but also seeing that to do something you love, to pursue this thing, you have to give up other things,” says Zac, who was 8 years old when Hanson started gigging around the group’s native Tulsa, Okla. “You have to give up the crowd of friends for the future, of what could be, with not a lot of guarantees. It could just as easily have become a failure as it could be a lifestyle.”

“It’s the getting up every day, and trying, and realizing that you’re not necessarily going to get applause at the end of it. … We got turned down by pretty much every label there was,” says Taylor, 35, recalling Hanson’s demoralizing early gigs. “But the show that ultimately got us with an A&R person, that heard it and said, ‘Yeah, I want to sign it,’ that was a show that I would never hope anyone saw. It was terrible! There was like four people, watching paint dry.”

“All you have to say is: We opened for a girl singing karaoke,” Zac quips.

“Karaoke to Garth Brooks! It was on the flatbed of a truck, at a little festival,” Taylor chuckles. “The crummy show turns out to be the one where just the right person that understands gets on board and helps you take the next leap.” 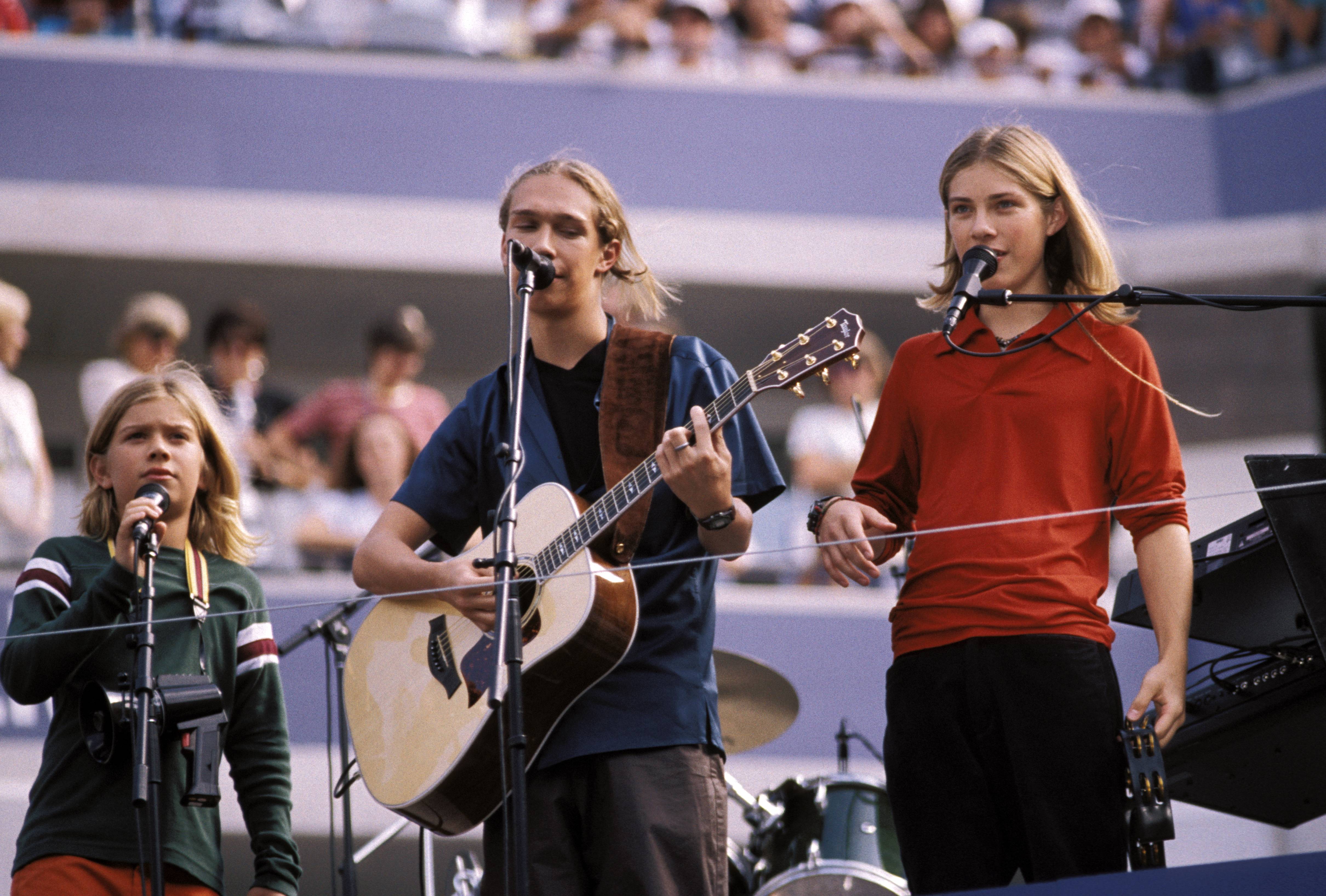 The struggles weren’t over for Hanson once they got that big break and signed to Mercury/PolyGram Records. Middle of Nowhere did go on to sell 10 million copies worldwide, and “MMMBop” went to No. 1 in 27 countries, earned a Grammy nomination for Record of the Year, and topped critics’ polls in the Village Voice, Rolling Stone, and Spin — but many other rockist critics were less kind. Then, shifts in the record business caused Hanson’s excellent follow-up album, This Time Around, to get lost in the shuffle, after the trio was transferred to Island Def Jam following the merging of PolyGram and Universal in 1999.

“We all watched the music industry start to crumble, with label mergers happening, and we were right at the heart of it. We were one of the bands that had been successful, so we were held onto as opposed to dropped,” Taylor explains, to which Isaac adds: “But we wish we would’ve been dropped, man! Holy crap.”

By the time Hanson released their third album, 2004’s Underneath, they’d gone independent — one of the first massive mainstream bands to do so — setting up shop with their own Tulsa-based 3CG Records. At the end of that album’s tour, Hanson played Carnegie Hall “as a statement to that whole project,” says Taylor, and the critical tides continued to turn. “We then began to set different [goals] throughout the career, because we need to keep reminding our audience, and ourselves, what this band’s about. So, we’ve continued to try to put ourselves out there and try new things.” The 23 tracks (several new or previously unreleased) on String Theory comprise Hanson’s sixth 3CG Records album, their most ambitious and joyfully noisy to date.

“There’s a funny thing when you start to analyze our career and our music,” Zac muses. “String Theory is this story about sort of aspiration, and fortitude, and fighting, and coming out the other side with your life’s conclusion. But when you look at our songs, what’s ‘MMMBop’ about? What’s ‘Where’s the Love’ about? What’s ‘I Will Come to You’ about, and ‘Weird,’ and — work all the way through the Hanson catalog — even songs like ‘Get the Girl Back’? They’re really all about ‘What am I gonna do? What am I gonna do?’ That’s the story in so many of our songs.”

Despite their career ups and downs, Hanson managed to avoid the scandals, meltdowns, and general pitfalls suffered by many other child stars because, as Zac puts it, “We had the opposite of ‘stage parents.’ They weren’t trying to make us realize some dream they had. It was our dream.” Ruminating about other artists who weren’t so lucky, from Michael Jackson to Justin Bieber, who did go off the rails, Taylor adds:  “I would argue, in most of those cases, it’s a really challenging situation internally that happens on a huge scale. Meaning those relationships, with the family, were toxic — way before there was success. There’s plenty of [notorious child star] names we all know where you’re like, ‘Not super-surprised about that one.’”

This explains why Isaac, Taylor, and Zac have been so supportive of their much-younger brother, 24-year-old Mac Hanson, the sixth of the total seven Hanson siblings — who is finally pursuing his own music career, on his own terms, with his rock ‘n’ soul band Joshua & the Holy Rollers. “Benevolent big brother” Isaac even produced the Holy Rollers’ debut single, “Hey Hey.”

“For a long time, we’ve all known [Mac] was super-musical and very creative,” says Zac. “I think he finally reached a point where, through the combination of it being too compelling to avoid it anymore, and his no longer afraid to be ‘the other Hanson brother,’ he finally went, ‘S*** I’m just gonna do this!’ It shouldn’t be surprising that he’s musical, considering we all have the same genes.”

On the subject of family — and genes — Isaac, Taylor, and Zac incredibly have a dozen children between them, with Taylor and his wife of 16 years currently expecting their sixth child. It’s quite likely that at least one member of this new Hanson generation will decide to pursue music as well, and Taylor in particular is to prepared to help his kids down that bumpy road, with which he is all too familiar.

“I for sure know my oldest son and my third boy, they’re musically gifted, very interested in music. I know there’s musicality across the spectrum,” Taylor says. “If you’re going to be a musician, you’re going to have to do music because that’s who you are. So the question is, whether you’re able to survive the music business side while being who you are. It’s really almost like accepting a disease you have. Nature is really strong. Nurture is there, but you show up with the package: This is who you are. And so if it’s in you, it’s more a matter of: What do you need to do to be sane?”

Looking back on their own atypical childhoods, however, Hanson wouldn’t change a thing. “There’s one thought, really. The whole thing is giving you a total takeaway, which is essentially is it’s worth trying,” Taylor asserts. “It’s worth reaching. It’s worth the fight, the struggle, the challenge. At the end of it, even though you’ve been through highs and lows and ups and downs, that little kernel that you started with — which is a song, just a simple song — it’s still worth going through all of that crazy in order keep doing it.”