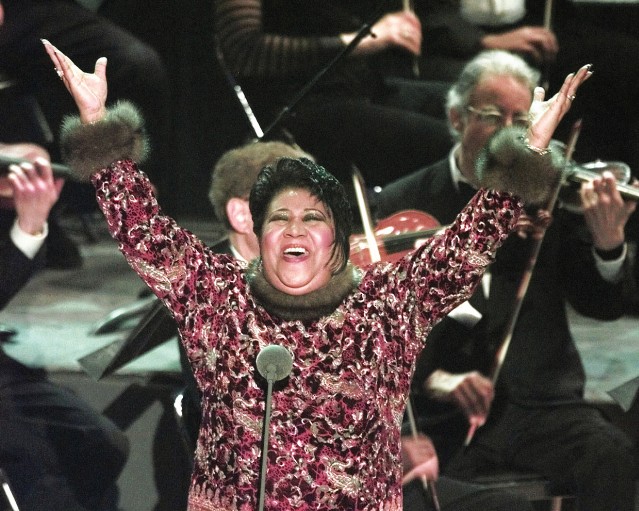 The 1998 Grammys were the most action-packed ceremony in the show’s soon-to-be-60-year history. Aretha Franklin pinch-hit for Luciano Pavarotti at the last minute on a performance of aria “Nessun Dorma,” often ranked among the greatest in award-show history. (Photo: Stereogum)

Queen of Soul Aretha Franklin, who died Thursday at age 76, delivered countless stunning television performances over her more than 60-year career, but one of them came later in life: her Grammy Awards rendition of “Nessun Dorma” in 1998. And it almost never happened. Luciano Pavarotti was supposed to sing the aria, but when he canceled at the last minute, Franklin stepped in, stepped up, and saved the day.

“Pavarotti had come in, rehearsed with us the day before, and I had no reason to believe he wouldn’t be in the show,” Ehrlich tells Yahoo Entertainment. “So, we were well into the show. Not that at that point I had realized that he wasn’t there. But my assistant Ron Basile came running up to me — I live underneath the stage during these shows, because that’s where I can see and talk to both the artists and the presenters — and he ran up to me with a torn off little piece of paper with a phone number on it and said, ‘Would you please call Mr. Pavarotti? He wants to talk to you.’ Which of course seems strange to me, because he should have been in the building.

Ehrlich, rushing to fill a “four-and-a-half-minute hole with a 65-piece orchestra, 30 singers,” considered asking Steve Wonder, who was on the show that year, to step in. He also thought that Sting, who had been slated to present Pavarotti’s performance that night, could serve as a replacement. “And then, I remembered that two nights before, Aretha had sung ‘Nessun Dorma’ for Pavarotti at MusiCares.”

Franklin, who had famously performed “Think” in 1980’s The Blues Brothers musical comedy, was set to appear on the Grammy telecast to promote that movie’s sequel, Blues Brothers 2000 — and she was already at New York’s Radio City Music Hall, where the 1998 Grammys took place. Ehrlich went into crisis-control mode.

“I ran up two flights of stairs. I grabbed [Pavarotti producer] Phil Ramone, who had produced MusiCares’ [Person of the Year gala] that year. I ran up to this cramped little broom closet of a dressing room. We knocked on the door, walked in. And she’s sitting there. Frankly, sitting there eating fried chicken, which did not surprise me, because I had often shared food with her. And I just said to her, ‘Look, we have a problem. How would you like to sing twice tonight?’ And she sat there and one of those ‘Aretha looks’ that I would get from time to time, like, ‘What are you saying to me?’ And then she said, ‘Yeah, I can do that.’”

Still, some adjustments had to be made. “She said, ‘But Ken, what about the key? Three keys. I think he sings it three keys different from me.’ So we scrambled, and we got Pavarotti’s conductor, who was there and had learned at the same time that Pavarotti wasn’t coming. And we found a boom box — we always recorded rehearsals and things, but this was in the days of cassettes, you know — we put it on the counter in the dressing room. And she spent the next 45 minutes working with Pavarotti’s conductor. We tested the key and she said, ‘I can do it. It won’t be easy, but I want to do this.’”

Later, when Franklin saw the set with the massive orchestra ready to go, she told Ehrlich, “This is gonna be fun.” Says Ehrlich, “And it was. It was amazing.”

Ehrlich actually made a rare departure from his home base underneath the Grammy stage to watch the moment firsthand. “I stood at the side of the stage; I wanted to see the audience reaction when she finished,” he explains. “And honestly, there was a stunned silence for a minute — and then all of a sudden, the applause erupted.”

Recalling the performance itself, Ehrlich marvels, “You can almost see it in her [when you watch video of the performance] — she gains confidence during this number. I didn’t realize that until I watched it a few times. She’s not tentative, because Aretha’s never tentative about anything, but as she sings the song, she just gets more and more confident in that. At the end, she ‘Aretha-fies’ the ending, and it’s like, ‘I now own this.’”

Ehrlich and Franklin didn’t reconnect the night, but they spoke on the phone the next morning, both now realizing the significance of what had transpired.

“It was an incredible moment where you realized that you have affected someone’s life and that in the end it really means something to them,” he says. “You know, with all of the things that she has accomplished in her life, for her to say to me, ‘This is one of the highlights of my life; I’ll never forget last night,’ it was really something. As close as we had been, because we had done a number of shows together before, that was a bonding experience that we were to share the rest of our lives.”