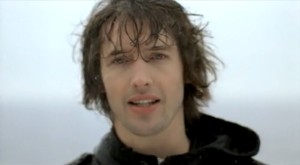 James Blunt became Britain’s Most Hated a long time ago, after the U.K. and most of the rest of the Western world decided that “You’re Beautiful” was the most insipid song of all time. Understandable, I suppose. James has actually released some songs that are way more tolerable than that one (I’m partial to “1973″), but his albums don’t sell like they used to, and he’ll probably be forever known as That Annoying “You’re Beautiful” Guy.

But truly, James should henceforth be known as That Awesome Twitter Guy. And whether or not you think he’s, well, something that rhymes with “Blunt,” you need to follow him on Twitter. Right now.

James is aware of the hate/hate relationship he has with much of the record-buying public nowadays, and he has no problem addressing this on his Twitter — and putting haters in their place. It almost seems like he’s seeking those haters out, for sport. And he’s getting the last laugh.

Really now, I know he probably made about 280 gazillion pounds off “You’re Beautiful” and never needs to work another day in his life, but if he ever does decide to retire from recording (as was once rumored), he ought to consider a career in stand-up comedy. Or at least have his own regular “Mean Tweets” segment on Jimmy Kimmel Live.

Enjoy some sample NSFW tweetage from the aptly named Mr. Blunt below. The man is a LEGEND.

Yet so many people bought it, bought it. RT @yanto1973: That James Blunt song is utterly horrific, horrific.

And finishes in your mouth. RT @trimjim90: James Blunt gets on my tits.

You obviously went to one of those schools where everyone got a prize. @ewanhendrie: I try to hate James blunt but I can’t

Then your dog should try harder. RT @RachelJohnsto96: @JamesBlunt my dog could do better!!!!!

And no mortgage. RT @hettjones: James Blunt just has an annoying face and a highly irritating voice

I foresee a career in poetry. @McKym: James blunt is a cunt

I preferred “2 girls, 1 cup”, but whatever you’re into. RT @joe__crown: 2 bullets, one gun, James Blunt and Noel Edmunds.. Without doubt

Only coz I turned her down. RT @anadinskywalker: my grandma just called james blunt a queer