Do You Remember The First Time?: The Moog Cookbook 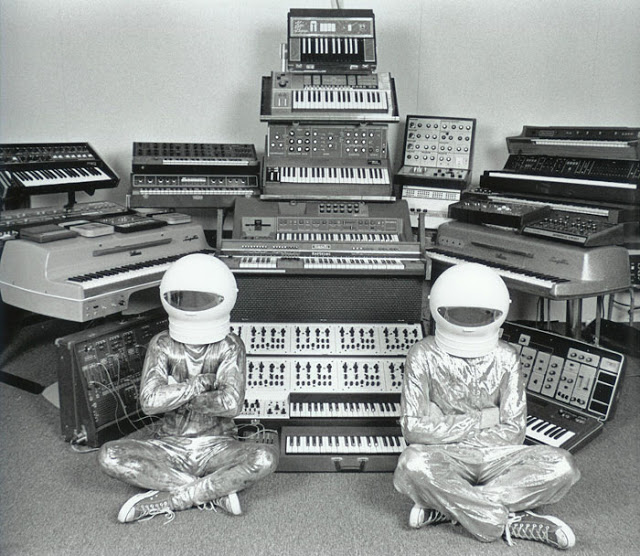 As the new millennium and all its promise of hoverboards and threats of Y2K meltdown came hurtling towards us back in 1996, the Moog Cookbook arrived in their proto-Daft Punk helmets to whisk adventurous pop fans to the final frontier of awesomeness. On their now-demi-legendary self-titled CD of new wave Muzak, this dynamic duo of Uli Nomi (aka Roger Joseph Manning Jr. of Jellyfish/Imperial Drag/Beck’s backing band) and Mecco Eno (esteemed Fiona Apple/Eels/Aimee Mann producer Brian Kehew) employed a smorgasbord of vintage analog equipment to freeze-dry and vacuum-pack alt-rock hits of the day like Green Day’s “Basket Case” and Soundgarden’s “Black Hole Sun” in a thick case of tasty, tasty processed cheese. (Okay, okay, I’ll stop with the food/cookbook analogies now.)

While the Moog Cookbook (named after an obscure 1978 recipe collection published by the wife of Robert Moog) never got the widespread recognition they deserved — despite props from their logical successors Daft Punk, a side gig playing with Air, a major Japanese tour, and a widely seen guest spot on MTV’s The Week In Rock alongside an unabashedly fanboying Kurt Loder — their The Moog Cookbook and classic rock-skewering sophomore album Ye Olde Space Bande are bona fide cult classics. And the recent massive success of the similarly helmet-headed, above-mentioned Daft Punk has unexpectedly put them back in the spotlight.

As part of Lyndsanity!’s new pop-history-lesson series “Do You Remember The First Time?,” I’m gleefully un-archiving this vintage Moog Cookbook interview, which covers just about everything from Buck Owens to Buck Rogers. Bon appetit, synth fans!

LYNDSANITY!: So how did you come up with this idea to form an all-covers, instrumental Moog band?

MECCO/BRIAN: There’s a genre of records that came out when the synthesizer first became popular — 1968 and ’69 — where people first did instrumental Moog covers of pop songs. Moog Plays The Beatles, Switched On Bacharach, a country album called The Plastic Cow Goes Moog…

MECCO: This was mostly 1969. And then around 1970 or 1971 — boom! They stopped, because it was no longer a novelty. Like breakdancing later on after the ’80s, it just went away. People still used Moogs, but in a nicer, Stevie Wonder-type way. Anyway, Roger and I, in our separate little lives, collected these albums.

MECCO: We both had a background, like a lot of keyboard players do, where it’s jazz, it’s progressive rock, it’s new wave — we didn’t differentiate. If it had synthesizers in it, it was cool, whether it was Loverboy or Brian Eno or Tangerine Dream. We’re influenced by all that stuff, and we’re influenced by Stevie Wonder and Kraftwerk, too. But it all started as the 1969 Moog album of the modern day, and that’s pretty much where it stayed.

LYNDSANITY!: How did you choose the songs to cover?

ULI: Well, we knew we wanted to concentrate on bastardizing alternative hits. We couldn’t wait to sink our teeth into songs we wanted to destroy and make really gross. One of my favorites is “Basket Case,” because we took what is supposed to be a punk anthem and, through the power of arranging, turned it into the grossest thing in the world. The fun part was taking what was supposed to be such a hard-edged, masculine, testosteroned tune, and sugar-coating the hell out of it. We didn’t change any of Green Day’s melody or infrastructure; we just added syrupy arrangement ideas.

MECCO: We would not reject any bad idea, that’s for sure! It was very difficult to pick songs, though, because a lot of modern songs cannot be played instrumentally because they’re all some guy or girl screaming, or all feel.

ULI: A song like “Black Hole Sun” happened so quickly because it has such a wonderful melody. So you can do anything you want to it, and it kind of ends up making you sound good! Other songs almost killed us, like [Pearl Jam's] “Evenflow,” because all of Eddie Vedder’s supposed melody is sort of a blues scat.

LYNDSANITY!: How did you do what I like to call, for lack of a more official term, the “Speak ‘N’ Spell” voice?

MECCO: With a tube in my mouth. The “Framptone,” as I like to call it. We wanted a Speak ‘N’ Spell thing but we couldn’t find one, and there are computers where you can type it in, but I couldn’t find one that was antiquated; everyone has new versions with pitch and inflection, and I was like, “No, I want monotone!” Roger was on the floor when I was doing it, it was so funny. He had to leave the room so I could finish it.

LYNDSANITY!: So when you were going about the arranging, did you think, “This one’s going to be our Eurodisco song,” or “Here’s our Muzak song”? What went through your minds?

MECCO: Well, the first one was “Black Hole Sun,” and we said, “What are we going to do?” And I looked at the drum machine and said, “Bossanova!” And I hit the button. Or like for the Offspring’s “Come Out And Play,” I really wanted to do “I Feel Love” by Donna Summer.

MECCO: Right. And I figured, if we’re gonna do a 1976 thing, we might as well have a Star Wars laser battle at the end!

LYNDSANITY!: How long have you guys been playing and collecting keyboards?

MECCO: I’ve been playing since I bought my first synthesizer in 1977. I’ve still got it. It was an Arp Odyssey — a classic progressive rock synthesizer. The Steve Miller Band and Devo used it a lot. But I could never afford all those keyboards, because all the keyboards that I read about in Keyboard magazine were going for $5,000. And then five years later they’d be two grand. Then a thousand. And then I was buying them in pawn shops for $150, because nobody wanted them anymore.

ULI: That’s the one good thing that came out of grunge, is that everybody was in heavy guitar bands and hated keyboards. You did NOT play a synthesizer, because it was uncool. So keyboards got very cheap.

MECCO: We were buying them when no one wanted them, like people used to do with Brady Bunch lunchboxes.  Now Moogs are worth so much money, and climbing.

LYNDSANITY!: How did you two meet?

ULI: In my never-ending search for old gear, Brian had a keyboard for sale in The Recycler, so I went to check it out, and we immediately hit it off. Anybody whose favorite pastime is watching the Sgt. Pepper movie is a friend of mine!

MECCO: Billy Preston saves that movie in the end, when he comes out dancing in his boots.

MECCO: What about Starguard, the ladies who sing “Lucy In The Sky With Diamonds”? We have some of their costumes. The music store that I worked at got a flightcase that said “STARGUARD” on the side of it, so we opened it up and it was all costumes, big silver platform shoes, stuff like that.

ULI: Anyway, so Brian and I started networking together, helping each other find keyboards. We’ve loaned each other money to help each other buy stuff.

MECCO: Yeah, or Roger would call me up and say, “I found two mint-green electric pianos that look like they’re on space pedestals in some guy’s garage in Fullerton!” And I’d be like, “Okay, I’ll rent a trailer!”

LYNDSANITY!: Let’s talk about some of the “Moogspirations” in your liner notes. Why is Neil Young in there, for instance?

MECCO: Neil Young has a synthesizer album that is absolutely amazing. It’s all synthesizer, from 1983, called Trans. It’s Neil, but it’s all synthesizers and all computerized, and the songs are great. I have a concert film of this tour where he wears Devo glasses and he’s running around singing through a talkbox, and the people in the audience are just SO bummed. They are NOT happy. It was his least popular album, but we think it’s his best.

ULI: It’s so funny that he’s adored for these classic works that he did decades ago, and Brian and I are going, “My God, this Trans album is one of the most overlooked works of brilliance!”

MECCO: He even redid one of his old Buffalo Springfield songs, “Mr. Soul,” in a synthesizer version, and that really pissed people off. The album is not available on CD. They WON’T make it.

LYNDSANITY!: Okay, why do you thank George Harrison in your liner notes?

MECCO: He did an all-Moog album. It was one of the first Beatles solo records. It’s totally hard to find, but it’s called Electronic Sound. It’s all Moog; there’s no rhythms, no drum machine. It’s really bad synthesizer music, and I love it. It’s just a guy noodling for two hours. It’s full of cool sounds, and that’s all there is. No music or songs, just noise. It’s probably the most unliked Beatles-related album of all time.

ULI: You’d definitely put it on to entertain everybody at a loft party at Magic Alex’s place!

MECCO: Buck Owens actually beat out the Monkees by buying a Moog first. He did his Switched On Buck album. Buck did a synthesizer years before Neil thought of it. Imagine, country fans hearing a synth album!

LYNDSANITY!: You also thank Tran-Star. Who are they? Not to be confused with Starguard, I presume…

ULI: Oh my God, they’re the best band ever!

MECCO: Down at Disneyland, in the late ’80s, they had a little space van, kind of like how you’d see on Sunday morning cartoons, and these three guys would hop out wearing space suits. There was a sound system built into the van, and they had two weird space keyboards and a strange diamond-shaped guitar, and they talked through little tubes and played computer-synthesizer versions of pop hits, like “Wild Wild West” by the Escape Club. They’d also do stuff like “Someday My Prince Will Come.” I became friends with them. We used to go downstairs under Disneyland and hang out.

MECCO: One reason we liked them so much is they used to make fun of Disneyland,  in Disneyland! They’d say stuff like, “There goes Snow White; I heard that’s just her nickname.” I asked them how they got away with it, and they said, “We run our voices through a machine, so I don’t think they can really understand us.”

LYNDSANITY!: And finally, tell me why you thank “Monica West & Roland Grand, aka Star Rock”? Again, not to be confused with Starguard?

ULI: They were a husband-and-wife team that lived in San Francisco in the early ’80s, who had a public access cable show called SFTV. But it was mainly a vehicle to showcase homemade videos by their own band, Star Rock. It was basically Roland, a hippie who never cut his hair and looked like Uli Roth from Scorpions, playing new wave on two synthesizers, and Monica would sing. She was a self-proclaimed blues singer who looked like Jeff McDonald from Redd Kross crossed with Linda McCartney. Their homemade videos were shot in their rehearsal room, and whenever you saw Roland playing drums, he would be projected on a separate video monitor, so they could have three people playing at the same time instead of two. When we were living in San Francisco, we videotaped all their shows; they were always on public access on Friday nights. Everyone would be like, “Come on, let’s go to the clubs,” and we’d say, “Screw that, we’re staying home to watch some Star Rock!”

LYNDSANITY!: I think you made the right decision.