Brian May Talks Politics: ‘We’re Not Heading in the Direction of Compassion’

Sitting with Yahoo and poring over his glossy new coffee table book, Queen in 3-D, guitar god and stereoscopic photography enthusiast Brian May pauses on page 88, gazing at a candid shot of late Queen singer Freddie Mercury — one of his favorite Freddie photos ever, though he only recently uncovered it while working on the book and un-archiving hundreds of pictures he snapped over the decades.

“In stereo, it’s so intimate. It’s so close that it’s like he’s alive,” May muses. “It’s like you could touch him and speak to him.”

Mercury, of course, tragically passed away in 1991 at age 45 from bronchial pneumonia resulting from AIDS; he would have celebrated his 71st birthday this month. The press hounded the iconic frontman until the very end; Mercury never officially came out during his lifetime, and he only publicly revealed his illness the day before his death. In Queen in 3-D, May writes candidly about Mercury’s struggles with the media, comparing his experience to the very different experience of current Queen frontman Adam Lambert, who is able to live in the spotlight as an openly gay man in a way that Mercury sadly never could.

“The whole ethos of our band really was that it didn’t matter,” May tells Yahoo. “That’s kind of inherent in the name Queen, even, which is why I was attracted to it. The whole thing that embodied the spirit of Queen was it doesn’t matter what your sexual proclivity is, any more than it matters what race you are, what color you are. Queen was meant to be something very across the board and international … and we kind of fulfilled that dream. And it was so normal for us that it wasn’t even worth discussing.

“So it was never discussed. Really, we didn’t. And Freddie went through a big transition, because in the beginning, I used to share rooms with him. So I know what Freddie did when we first got started, and it was nothing to do with men! But he gradually metamorphosed into the person that he was comfortable with, and became sort of the gay man. But it wasn’t public, and it wasn’t until he was virtually about to die that he was able to announce it very clearly, because we wanted to establish this charity to fight AIDS [the Mercury Phoenix Trust]. …. But it’s because he was able to announce this just before he died, rather than die in some kind of mystery. So it was a brave thing for Freddie to do at that time.”

On page 175 of Queen in 3-D, May frankly addresses the current political climate, expressing concern that society will enter another conservative, closeted era like the one Mercury had to endure. “I think we all fear it,” he tells Yahoo. “I mean, the way this country [America] and Britain is going is — in my opinion — backwards in regards to acceptance of the differences between us. … I see things going in the wrong direction. I see [Britain] leaving Europe, so we’re leaving behind all these wonderful accords that we had. You know, the international spirit we’re trashing. And I see this country doing what it’s doing, which is making LGBT a hard case to be. … And I think it’s sad. Maybe things have to get worse before they get better; I don’t know. But it doesn’t look too good at the moment, and I think it’s impoverishing all of us — the fact that we’re not heading in the direction of compassion and acceptance of each other’s differences.” 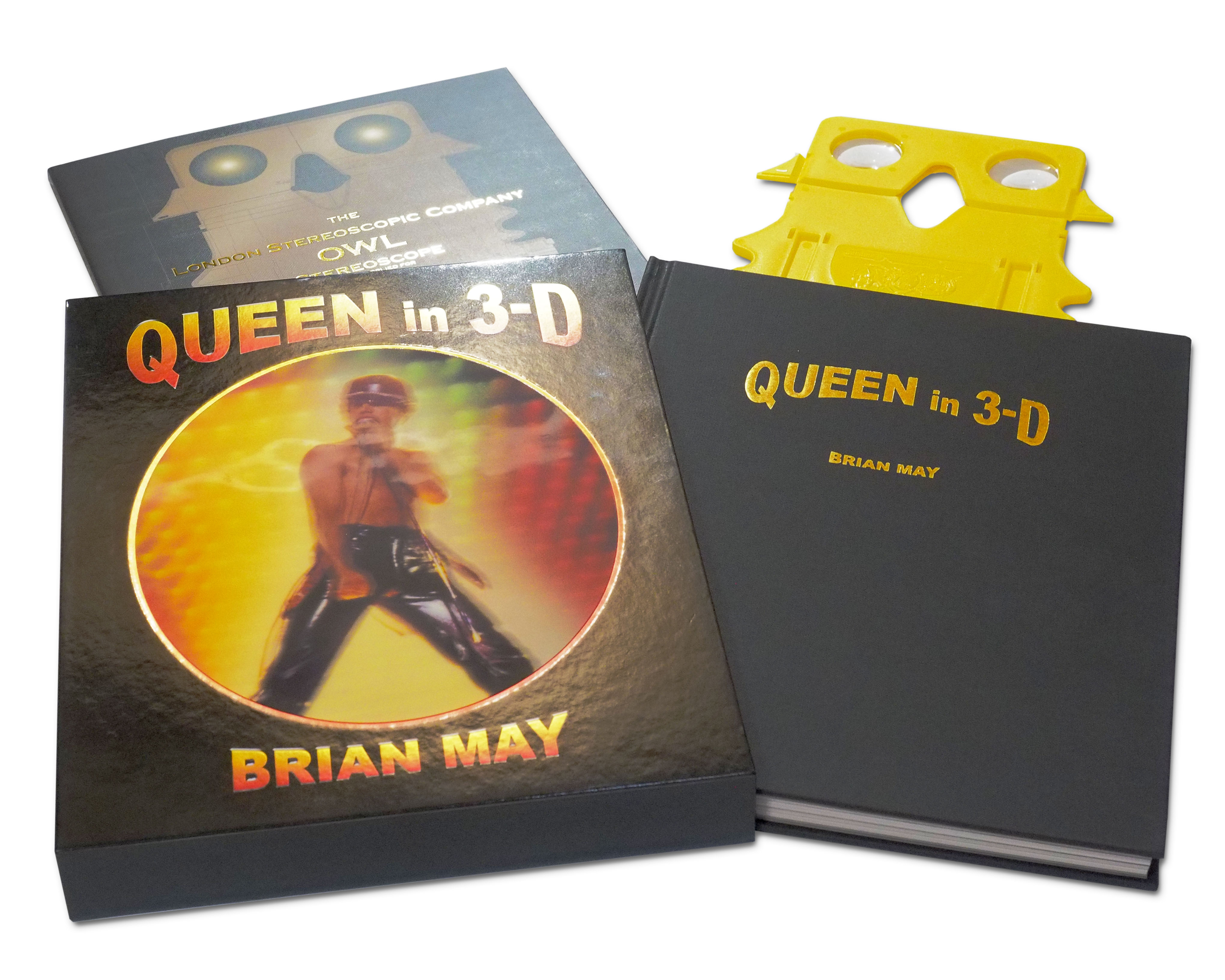 While May gets serious when discussing politics or Mercury’s death, the self-described “passionate stereoscopic geek” brightens when discussing his love of stereoscopy — which began for him at age 11 in the 1950s, after he sent away for a stereoscopic photo of a hippopotamus advertised on a box of Weetabix breakfast cereal. Now the founder of the London Stereoscopic Company, May excitedly demonstrates how to use a stereoscope viewer — known as an owl — using a special-edition version in a custom shade of yellow that perfectly matches Mercury’s famous 1986 Wembley Stadium jacket.

“I used to dream of sharing this experience with the world,” he says, viewing rare Queen in 3-D photos that begin with the band’s early days (another snapshot highlight, on page 56: that time when Mercury shaved his chest for a photo shoot and later regretted it) and go all the way through to what May cheekily dubs the modern “Madam Lambert” era with the aforementioned Adam, whose voice May calls “one in a billion” and a “gift from God.”

“You’re looking through a window into the past, and it’s very evocative. I was very conscious making this book, sort of rediscovering all of the things that we’ve been through in our lives,” says May. “It’s an incredible life. I feel so grateful that we had it, and we still have it.”

As for the press’s harsh treatment of Queen and Mercury back in the ’70s and ’80s, May says, “Freddie was just lacerated by the media, and it’s so funny to hear people now talking about Freddie like he’s some kind of god. Well, you know, he deserves that, but the contrast between the way he was treated before and what happens now — it makes me smile. And Freddie would really smile. I hope he’s up there smiling somewhere.”

Lyndsey Parker Appears on the ABC Documentary ‘The Show Must Go On: The Queen + Adam Lambert Story’