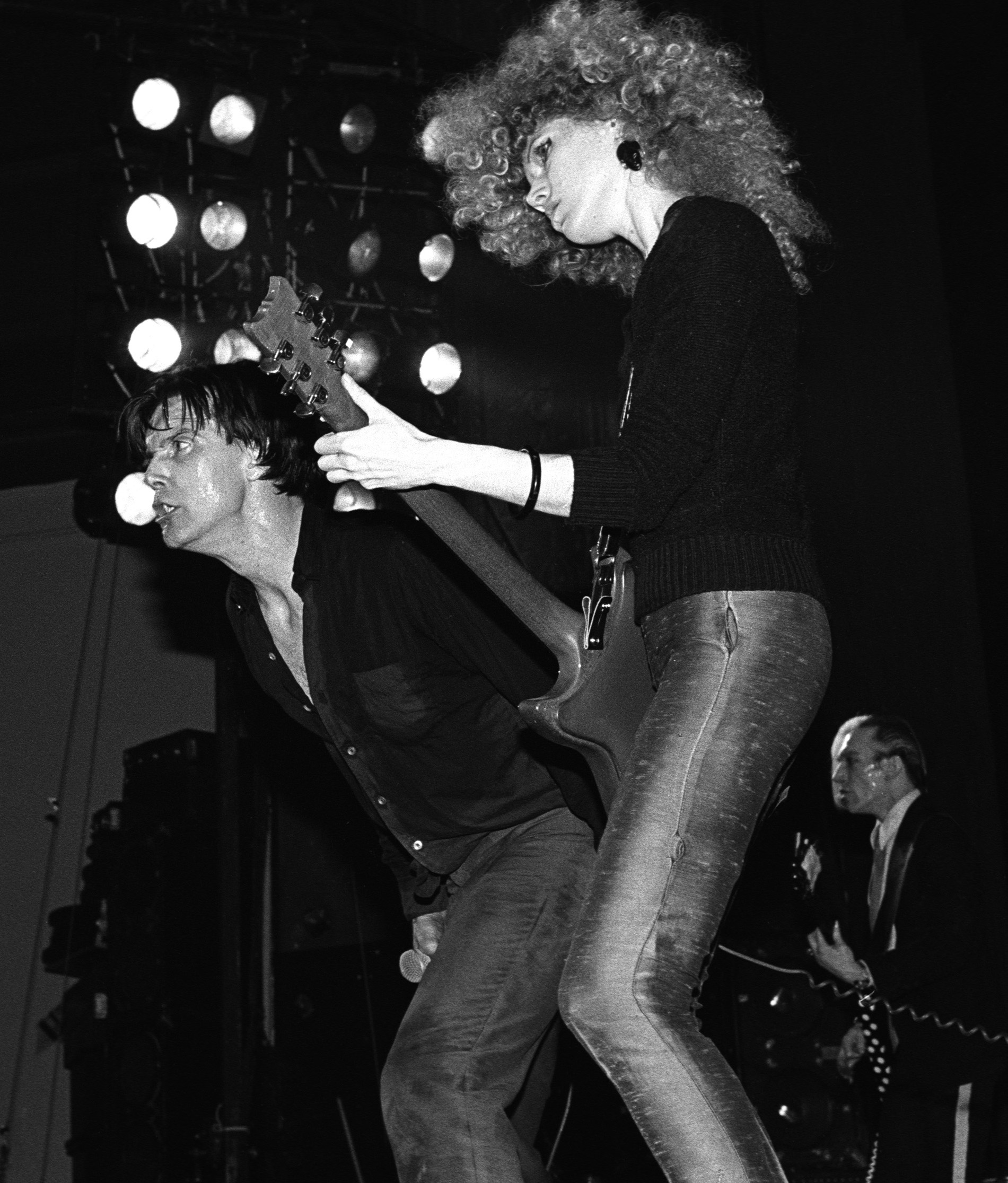 The Cramps in the late ’70s. (Photo: Ebet Roberts/Redferns)

“Somebody told me you people are crazy, but I’m not so sure about that. You seem to be all right to me.”

So uttered the late, great Lux Interior 40 years ago, when his shockabilly band the Cramps played Napa State Hospital’s mental institution on June 13, 1978. This was obviously years before anyone owned smartphones, or even VHS camcorders, and the bizarre event was witnessed by only about 100 patients, a few staffers, and some punk-rock stragglers who had driven up from San Francisco. But thanks to an indie company called Target Video that captured 20 minutes of the jaw-dropping action, it will forever be known as one of the most legendary and infamous concerts in punk history.

“We’re the Cramps, and we’re from New York City, and we drove 3,000 miles to play for you people,” Interior announces to the belligerent, bewildered spectators in the grainy, black-and-white footage (which aired once on Target’s Bay Area public access TV show and was an underground bootleg phenomenon for years until the advent of YouTube). “F*** you!” is the audience response.

The clip shows that the crowd did eventually warm to the band, however. As Target Video co-founder Jill Hoffman-Kowal told Noisey, the gig “was a beautiful, beautiful thing. What we did for those people, it was liberating. [The mental patients] had so much fun. They pretended they were singing, they were jumping onstage. It was a couple hours of total freedom. They didn’t judge the band, and the band didn’t judge them.”

It wasn’t unusual for the Napa facility to host music events. As Bart Swain, the hospital employee who organized the event, told Noisey, he often booked classical, folk, and even other punk acts to entertain patients. (Swain hired the Cramps and another band that wasn’t filmed for unknown reasons, the Mutants, through a San Francisco punk scenester named Howie Klein, who would go on to become the president of Reprise Records in 1989.) Swain was concerned, however, by the unprecedented presence of cameras, which were a clear violation of patient confidentiality. But the patients themselves didn’t seem to mind.

It makes sense that the Cramps connected so well with what can only be described as a fringe audience. The band, formed in 1976 by Interior (real name: Erick Lee Purkhiser) and his guitar-playing future wife Poison Ivy Rorschach (Kristy Marlana Wallace) — after Interior, as urban legend has it, picked up a hitch-hiking Rorschach — themselves lived on the edges of society. And they were always the real deal. Despite all their smart-alecky double-entendres (with song titles like “Creature From the Black Leather Lagoon,” “Bend Over I’ll Drive,” “Two-Headed Sex Change,” and “Can Your Pussy Do the Dog?”), they were never a joke, a novelty act, Addams Family cartoons, or some kitschy art concept. They were a cult band in the truest sense of that term, and damn proud of it, right up to Interior’s death in 2009.

Yahoo Entertainment: You seem to have always taken great pride in being outsiders…

Lux Interior: I’ve heard it said a million times that the Cramps are “trying to be weird.” We’re not trying to be weird. If people perceive us as weird, then we really are weird. We’re just trying to be ourselves. It’s not “weird” to us; it’s great! And we want to be appreciated for who we are. We enjoy being a cult band. We want it to be that way. I’d prefer that than being a big huge band that all kinds of people like. I’d like people to understand that we are not like them. We really are different from most folks. We’ve had a hard life. We’ve been through a lot of things. We’ve taken every drug in the book. I’d like to think that people who listen to us have been through something too.

Poison Ivy Rorschach: We don’t feel like our music is for everybody. It is music for others who can identify with that — being a hoodlum, an outsider — who’ve taken risks. No one else should be expected to like it. We’re not even trying to make music for anyone else. If you’re not from that world, you’re not going to get it. Those who would call it “kitsch” or “camp,” it’s because they’re coming from a different place. They can’t begin to know the world, the reality, that this represents. … We’re not the same [as other people]. I was considered a hoodlum slut all my life. I had fights with my mother over it. I’ve made money from sex-related jobs, being a dominatrix. Lux has been in jail before. My sister’s ex-husband killed a 17-year-old with a semi-automatic. These aren’t “concepts.” These aren’t fodder for funny songs sung in geezer fake Southern voices.

Rorschach: There wouldn’t have been a Cramps — we wouldn’t be where we’re at now — without the income I was able to make as a dominatrix. … And I learned all about people, and money, and getting my way. It was business on a most immediate level. And there’s nothing wrong with that. I think [some judgmental people would] call it prostitution. As if having some mind-numbing job isn’t? But no one who does it is doing anything they don’t want to do. Treating people rough was fun, having rich executives at my feet. I enjoyed that form of power. It’s another world. I was just a different kind of person; I was loose. I liked what I did. It was very interesting work, very intimate — and not just sexually. It’s very interesting, being intimate with strangers. What a fascinating opportunity! It’s just not for people from the outside to judge.

Yahoo Entertainment: So, do you think there are other “shocking” bands out there that are all talk, with no gritty life experience to back it up?

Rorschach: Well, I feel really separate, really a world apart, from a lot of suburban college bands coming from another place, whose song is a “concept.” For instance, we see the adjective “white trash” thrown around a lot to describe what we do. I think that’s a really racist term; I can’t believe it still exists in our culture. Everybody’s trash! People call us “white trash” as they’re munching their McDonald’s burger. There’s middle-class trash, suburban trash, bourgeois trash. You’re all f***ing trash. I just flat don’t get it. We would never, ever sing about “white trash” as a concept. But if someone wants to call us that, fine; we’ve been called names all our lives.

Interior: There’s some book with all of these bands listed in it, and it says, “The Cramps give a funny, one-step-removed view of the real rockabilly culture.” Now, growing up in Akron, Ohio, all of my friends were hoodlums. This music I grew up with. This is the only thing I’ve known. A lot of these college kids that write about us, they’ll talk about us like we’re what they are, just because that’s how it appears. It’s humiliating to us to be thought of as intellectuals who thought of this art idea of appropriating this weird music that has nothing to do with us. A lot of those rockabilly people were doing something really intense and original — sexually intense. That was a part of my growing up. This is something people can’t know about unless they’ve been through that. If you’re a freak in a freak show, then you know what another freak’s gone through. So I don’t want people to think they’re just like us, but we do want them to have some respect for who we are and not think we’re some kind of college kids with this idea. We’ve been through a lot of hardship to get where we got to.

Rorschach: There’s nothing that I’ve done that I’m ashamed of. I don’t think people realize how real we are, and how different.

Interior: Just about everything we did was illegal up until the Cramps. My best friends in school are all in jail or dead now. One of my best friends was one of the guys who shot those people at Kent State. He would’ve shot anybody for any reason. He also dropped a cement block off of an expressway onto a car one time and almost killed someone. His best friend, who I hung around sometime, blinded a guy — he took his thumbs and pushed this guy’s eyeballs in. These were the hoodlums that I knew and gave respect to.

Yahoo Entertainment: OK, so your crazy concerts are world famous. How do you psych yourself up for the stage? Unlike with some bands, it doesn’t seem like there is much separate of your onstage and offstage personas…

Interior: It’s just fun! We don’t have to do anything to psych ourselves up.

Rorschach: I probably slip into some hypnotic state as soon as we step out there. Some people say we’re different on and offstage — which one’s real is for them to guess. I’m sure we must slip into some state of mind.

Interior: Basically, we know it’s gonna be fun. Our audience and the place we’re playing is different every night, so it’s always different. Our audience is either totally weird and strange and entertaining to us, or they’re really boring and still, in which case we think of it as a challenge to win them over by being really intense.

Rorschach: I think we cultivate being open to certain energies. I do these invocations, which could probably be interpreted as an invitation, of certain spirits that can’t be seen that can only enhance the energy at a show. Some performers just aren’t tuned in to that, and some are. But even if I didn’t do that, I’m sure they’d be attracted.

Interior: We really believe in magic and things you can’t see, and we’ve always taken a lot of chances — otherwise, we would’ve never made it. This current staring-at-the-shoes style of performing is because at one point, “rock ‘n’ roll” became “rock music,” and everybody was suddenly an “artist,” and performers started getting this mixed-up idea that they were doing “art.” And if people wanted to pay money to see it, that was OK, but they’re suffering and they’re doing their “art.” That’s not the school we come from. We come from the carnival side of things, the showbiz kind of thing, the burlesque kind of thing. If people are going to come pay money to see you standing on a stage, you should be doing something to entertain them. That’s only fair.

Yahoo Entertainment: You certainly don’t seem to be mellowing or slowing down with age.

Rorschach: If anything, we’re getting weirder, the longer we’re on this earth. … Lux and I have always been reckless and sought out thrills, taken risks, probably blown our minds in certain pursuits. So wherever it is we’re at now, it’s from living that kind of risky life, not doing anything mainstream in any way.

Interior: On our last record label, we told someone we were going to France and playing to 40,000 bikers, the French version of the Hell’s Angels. There’d be live sex onstage and all these different biker clubs. We were telling this guy how much fun it was going to be, and the guy said, “Wow, wouldn’t you be afraid?”

Rorschach: I think this guy thought because Lux wears makeup and high heels, there’d be some kind of conflict with the bikers. What he didn’t realize is, Lux is such a nut that anyone like that [the French bikers] would love him — they would recognize what was in common, not what was different.

Interior: They appreciate that we’re weirdos, because they’re weirdos.